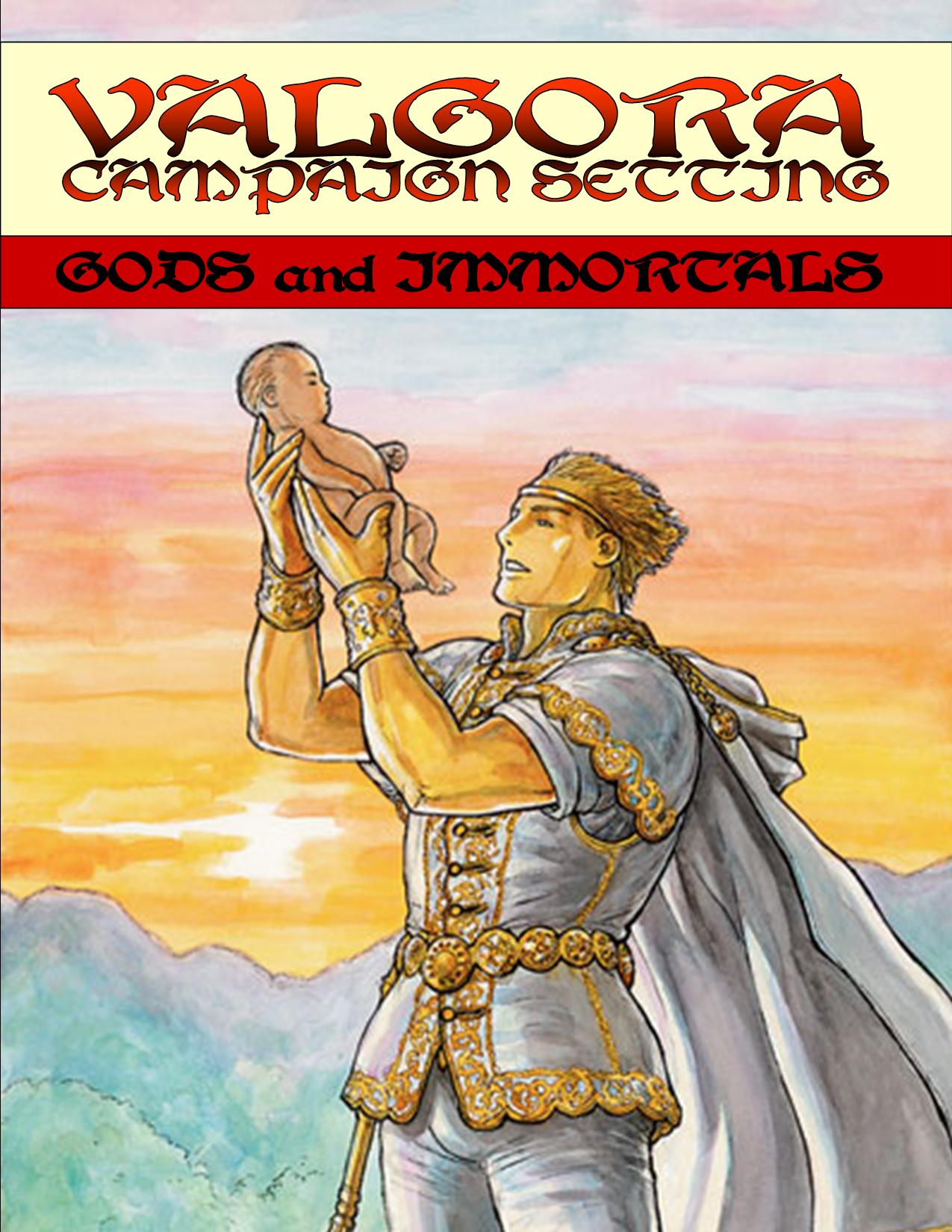 The Gods are the beings who shape the world into what it is and what it will be. Equally as eclectic as their followers, the Valgorian pantheon is made up of ascended beings who defined and championed their own causes.

Chronos is the God of Time. He maintains the time flow, and ensures that others do not tamper with time in ways he does not wish. Chronos has many titles, including ‘’Father Time’’, ‘’The Eternal Watcher’’, and ‘’The Ever Present’’. Followers of Chronos tend to be found among sorcerers and clerics.

Cigami is the God of Magic. This powerful arcane deity resides in the Lore Library deep within the heavens, constantly learning and creating spells and other magic. Sorcerers and Wizards and other arcane adepts adhere to Cigami’s faith, but he also finds followers among those who appreciate wisdom, knowledge, and power.

In mortal life, the mighty dwarf Darshul Darkbeard charged valiantly into battle alongside his mentor Vargach. On the day Vargach accended to his throne, Darshul felt personally abandonded and betrayed. Instead of taking up the reins of the militia the two had built, Darshul started onto a path to confront his former friend about his sudden rise to power and abandonment issues which would lead to ultimate corruption. Darshul has become an evil, evil man, trained in battle and wits by Vargach personally. As such, he is a serious threat to Good in every land.

Known by many names, most prominently The All-Sayer, The Word Writ, and the Spoken One, Harper is the God of Language and Communication, and is worshiped as a deity who dismantles barriers and facilitates the spread of everything through communication. His followers are strong amongst traveling bards and rangers, who routinely meet those who speak languages originally foreign to the wayfarer.

JuWell is the playful demigod of passion. She enjoys the mortal sensation of Lust, and spreads promiscuity across the land. She is not to be confused with Yeshua, the God of Love, as she finds love troublesome, whereas Passion is fleeting and requires no heartache.

Mollarok is the God of Justice. He oversees the laws of Gods and Men alike, and adheres to the ideas of Cosmic Balance. His followers are often Monks and Clerics who seek to cast out lawbreakers.

Talamon is the All God or Creator God, and the only deity with which Vargach looks up to for advice and assistance? Talamon, in life a radiant dragon, came into being through unknown methods. A creature of great power and good intentions, he was saddened at the loss of heart of the world . Thus, he sought out the few good souls remaining, and took them to a far away continent. He told them to rebuild the world into a better place. The rest of the world, Talamon wiped clean. Using his final breath and prayers, he pull together the lands of the world from the distances of the ocean into the supermass they are now, so that all could live together. With the death of each dragon descended from him, Talamon grows, taking the dragon in.

Vargach, as legend says, is the reason that Valgora exists. If it had not been for him in his mortal form slaying Frubai, the god of thievery, the world would have been left barren. He has ascended to the throne of the Valgorian pantheon and reigns there to this day. No God or Goddess has a following as large or as devoted as his.

For Racial Panethons consisting of Patron and Lesser Deities of the Races, please click here.

The Gods who reign from the unknown heavens on the Court of Radiance are deities whose roles (and powers) may be much smaller than their greater counterparts.

This is were the legend of Morton Frightful begins. His mortal surname has been lost to time, but the moniker he earned that night has been adopted by even himself: Frightful. Morton tracked down the scout party responsible for the death of his humble family, which had already returned to its full army. It has been told that the army was of 10,000 orcs. However, whether this is a true figure or just the result of generations of oral renditions is not known.

Qualirian is the Goddess of nature, yet not the patron deity of Valgorian druids. She holds a light disapproval of Yeshua and his followers, as she believes they stray from the main cause of preserving natural Valgora, with all its peace and violence together.

Yeshua is the God of Love, and the patron deity of Valgorian druids. He presses for the global peace of Valgora, and has succeeded for the most part, though his powers of recent are diminished as threat of violence spreads across the globe.

The gods and goddesses who control Valgora's weather, elements, and structure.

Born of wave and water, Aqualira is the Valgorian Goddess of Water. In certain cultures she may be referred to more finite such as Goddess of the Sea or Goddess of Rivers & Lakes, but she is in fact the Goddess of all bodies of Water.

Bringing light and heat, as well as pain and fierceness, Grendale is the Valgorian God of Fire.

Once a dwarf miner, this being who now resembles the earthen clay of his home monitors the lands of Valgora.

Those capable of flight and those relying on the wind's grace pay homage to Rendisha.

The Court of Commons[edit]

Kurak is the God of Death. A truly neutral deity, he does not have followers embrace death before their anointed time. Working closely with Chronos, the God of Time, Kurak Sheppard’s the recently deceased to their proper place for afterlife, depending on who they worshipped or how they lived said life. Kurak and his followers despise the undead, seeing Undeath as an affront to the natural order of life. His followers are typically the assisting, quiet, behind-the-scenes types and can come from many walks of life.

Each a terror spreading monster in their own right, the banded together lesser deities who stray from the side of Good hold a loose coalition to further all their causes.

Belial takes great pleasure in observing the lives of mortals and often burdens a thief or assassin with special missions that offer great reward on completion or great doom if they should fail.

Hex holds no dogma of his own, but he has an unyielding intolerance of willfully ignorant people.

Nestor is the God of Deception. He uses treachery, misinformation, and obfuscation to mask his activities, which all invariably involve gaining more power for himself. Since he would rather exploit a system rather than destroy it, he is often at odds with Havishem and Sethil. His followers include many politicians, theives, and scoundrels, but many assassins also call upon him.

Precious few Valgorians have fought and championed their own causes to such glorious extents as to reep the benefits of Immortallity and Demigod status on their own. Some of these individuals may even still be found somewhere in the lands.

Called Lord, King, or Ruler amongst their races, these are the individuals who represent the things that go bump in the night.

Brimir Woodbane leads the dens of Valgora and is a champion of all lyncathropes, shapechangers, and shapeshifters. He leads from a fortress hidden within the Rendigo Reservoir

Lord of the Undead[edit]

The Lich Lord Arandur Umbar was a wizard lorekeeper for a former King of Ghikva in life, but is now a powerful necromancer residing in an icy citadel within the Frostfrail Mountains.

Count Duncan Von Trisk, leader of the coastal country of Vren Drux, is also a lord amongst the Vampires. His name is revered amongst these particular undead and his coven is the largest of the lands.

These are the warriors who forged a legendary path to immortality, saving the world many times over. Named after one of their members, Meloku's Gang are honored amongst all Valgorians.

The Soldier of Light who leads the Order of Vargach is more than he may seem. A fight for light who intimidated the intimidators and put fear into the hearts of evil men across the world, Azule rose to demigod status and holds the title of God of Intimidation and his few followers who know of his true power even refer to him as the God of Power. These titles seem to belong to an evil man, yet Azule is a very good and friendly individual.

Born of noble stock, the young human sorcerer known as Essex traveled the globe in search of arcane knowledge and power. He found what he sought, and more. Now known as the arcane entity of Meloku, this sorcerer is the pentacle of arcane power. Usually neutral in conflicts, he does lean towards the good and has fought alongside Azule StrongArm in battle.