Blüdfrost is the northernmost state of Ghikva, but is more commonly known by the name The Frozen Coast. It is the most hostile region in the known world, and visitors never come without purpose. 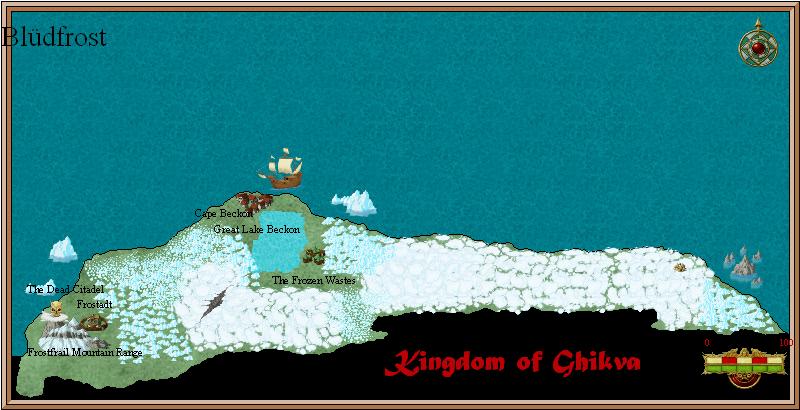 A Novice Cartographer's map of Blüdfrost

The coastal capital of Cape Beckon houses the small state's largest population, a mere 6,000. During the fishing season, however, the town swells to roughly 22,500 as travelers and adventurers looking to improve their pocketbook pack the town looking for work on the local fishing vessels.

Frostadt is the second and only other major state village. Located at the base of the western frostfrail mountain range, the village is a hotpot of local legends about creatures and goings on at the top of the world's coldest mountains.

At the peak of Mount Frostfrail lies the Dead Citadel, the home of the Lich Lord of Necromancy, Lord Arandur Umbar.

The majority of Blüdfrost is the barabaric barren lands known as the Frozen Wastes. Ill-prepared adventurers or those of lesser fortitude regularly succumb to the region. It is estimated that only about 1 in 10 freshman groups of travelers will make it through. The waste is home to creatures who endure and prosper in the hostile climate, and rarely are they friendly to newcomers and passerbys.

Fishing is the predominant industry in the state, and provides roughly 98 percent of the gross state income. The springtime fishing season produces most of the product for the known world, and is considered the most dangerous profession as well. On average, only 1 in 5 rookies will survive their first season on the waters of the great north sea.

The State Head is the human and famed Fisherman-turned Politician Vladmir 'Ice' Aristarkh. He earned his nickname after surviving a shipwreck by swimming to the nearest landmass in the frozen water. He is much beloved in his home state and works endlessly to ensure the fishing-based economy of the land. His only child, Anna Maria Aristarkh is a celebutaunte of the state, and posters of her can be found in ship cabins around the region.

Members of the State Hockey team are always huge celebrities, and spend most of their nights partying away with the rest of Cape Beckon's club going youth.

The Cape Beckon Brawlers have won 87 of the last 90 Ghikvan Hockey Championships. The three they lost where due to the entire team roster of the year dying during the fishing season.

The Blüdfrost Barracudas represent the state in the Ghikvan National Football League. A middle card team, they are always second-class athletes in their home town when compared to their Brawlers counterparts.