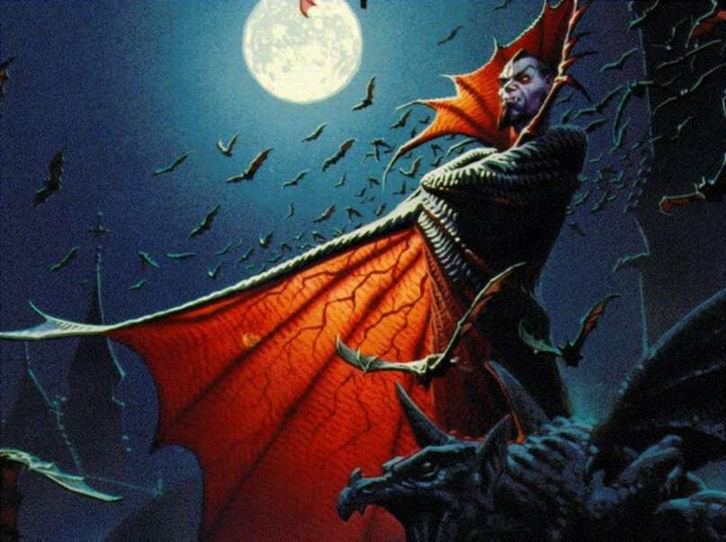 Count Duncan Von Trisk, leader of the coastal country of Vren Drux, is also a lord amongst the Vampires. His name is revered amongst these particular undead and his coven is the largest of the lands.

Von Trisk, is never seen at the senate, and is instead represented in senate dealings by John Harkinger, whose exact relationship with the count is unknown.

Harkinger was a low-ranking member of a Vren Drux naval vessel that was way laid by low ranking members of Duncan's Coven. John showed no fear, and through both luck and skill managed to slay three of the four vampires and was the last survivor on the ship. When this survivor, at the time a newly created vampire named Corbin, returned to the Coven and spoke of a human who showed no fear, Duncan took great interest in the man.

The Count, as leader of the country, called John to the royal palace to congratulate the military man on his victory and award him some service awards. At the meeting, Von Trisk enjoyed John's company and eventually secured his trust and informed him of the truth of his dual existence. He offered John immortality, and Harkinger refused. He stated that it sounded like more of a curse, and he was not interested. Never the lest, the two formed an odd friendship and Von Trisk personally saw over Harkinger's slow rise in the Vren Drux military. Eventually, Harkinger became the Count's representative abroad, thus allowing Vren Drux to have a representative in the Malsvir Senate without Von Trisk giving away his dual identity.

The Coven based in Triskvania, the capital of Vren Drux, that Von Trisk heads is by far the largest coven in existence. The exact number of vampires and vampire spawns within are unknown, though rumors usually rest in the vicinity of 300. At any given time, many of these may be in travels around the globe. They reside under and within the royal palace amidst a large cavern system that they have slowly built. All government and important businesses and homes are accessible from this cavern system.

Amarande
One of the Count's three brides

Corbin
Duncan's second in command and his Chosen (see below)

Karayan
One of the Count's three brides

Nelo
One of the Count's three brides

More Spawn (Su): Von Trisk adds his charisma modifier to his hit dice to determine how many spawn he can have enslaved.

Turn Resistance (Su): Von Trisk's turn resistance (see below) is increased by 1 for each of his spawn within 60 feet.

Enhanced Spawn (Su): Any vampire or vampire spawn created by the count of 2nd level or higher gains a +2 enhancement bonus to it's Strength and Dexterity scores. If Duncan is destroyed or releases the spawn from service, the spawn loses this bonus.

Master's Chosen (Su): Von Trisk can designate a single vampire or vampire spawn that he created with his create spawn (see below) ability as his chosen. Doing this requires a 1-hour ritual during which the chosen must consume a small portion of the count's flesh. The chosen gains a +6 enhancement bonus to its Strength and Dexterity scores. Von Trisk can remove this designation as a standard action. If Duncan is destroyed or releases the chosen from service, the chosen loses this bonus.

Blood Drain (Ex): The Count can suck blood from a living victim with his fangs by making a successful grapple check. If it pins the foe, it drains blood, dealing 1d4 points of Constitution drain each round the pin is maintained. On each such successful attack, Duncan gains 5 temporary hit points.

Children of the Night (Su): Von Trisk commands the lesser creatures of the world and once per day he can call forth 1d6+1 rat swarms, 1d4+1 bat swarms, or a pack of 3d6 wolves as a standard action. (If the base creature is not terrestrial, this power might summon other creatures of similar power.) These creatures arrive in 2d6 rounds and serve Duncan for up to 1 hour.

Dominate (Su): Von Trisk can crush an opponent’s will just by looking onto his or her eyes. This is similar to a gaze attack, except that Duncan must use a standard action, and those merely looking at it are not affected. Anyone the count targets must succeed on a Will save or fall instantly under the Ducan’s influence as though by a dominate person spell (caster level 12th). The ability has a range of 30 feet.

If Duncan instead drains the victim’s Constitution to 0 or lower, the victim returns as a spawn if it had 4 or less HD and as a vampire if it had 5 or more HD. In either case, the new vampire or spawn is under the command of Von Trisk and remains enslaved until Duncan’s destruction. At any given time Duncan may have enslaved spawn totaling no more than twice his own Hit Dice; any spawn he creates that would exceed this limit are created as free-willed vampires or vampire spawn. A vampire that is enslaved may create and enslave spawn of its own, so a master vampire such as Duncan can control a number of lesser vampires in this fashion. Duncan may voluntarily free an enslaved spawn in order to enslave a new spawn, but once freed, a vampire or vampire spawn cannot be enslaved again. Von Trisk's class ability More Spawn (see above) increases the amount he may have enslaved.

Alternate Form (Su): Von Trisk can assume the shape of a bat, dire bat, wolf, or dire wolf as a standard action. This ability is similar to a polymorph spell cast by a 12th-level character, except that Duncan does not regain hit points for changing form and must choose from among the forms mentioned here. While in his alternate form, Von Trisk loses his natural slam attack and dominate ability, but he gains the natural weapons and extraordinary special attacks of his new form. He can remain in that form until he assumes another or until the next sunrise.

Fast Healing (Ex): Von Trisk heals 5 points of damage each round so long as he has at least 1 hit point. If reduced to 0 hit points in combat, he automatically assumes gaseous form and attempts to escape. Duncan must reach his coffin home within 2 hours or be utterly destroyed. (He can travel up to nine miles in 2 hours.) Any additional damage dealt to Von Trisk forced into gaseous form has no effect. Once at rest in his coffin, Duncan is helpless. He regains 1 hit point after 1 hour, then is no longer helpless and resumes healing at the rate of 5 hit points per round.

Gaseous Form (Su): As a standard action, Von Trisk can assume gaseous form at will as the spell (caster level 5th), but he can remain gaseous indefinitely and has a fly speed of 20 feet with perfect maneuverability.

Resistances (Ex): Von Trisk has resistance to cold 10 and electricity 10.

Spider Climb (Ex): Von Trisk can climb sheer surfaces as though with a spider climb spell.