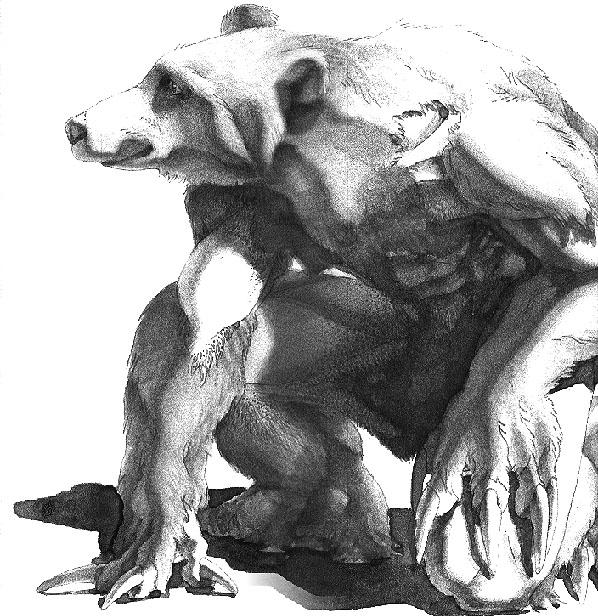 Brimir Woodbane is also a champion among lycanthropes, shapechangers, and shapeshifters. His name is revered amongst these particular afflicted beings and his den is the largest of the lands.

Brimir was born in a small Rendigo village and raised by his single father Frimir, who was a blacksmith. The small village was situated along the edges of a span of the reservoir and as such the residents frequently became victim to attacks from wild animals.

Brimir, like his father and numerous other members of the village, was born with the wildblood of the lycanthrope. As such, he was often called upon to help defend the village against the wild beasts of prey. Locals often recollect on the young Woodbane's strong feelings of why his people, the lycanthropes, were much more than mere animals. He would also lecture any villager who called the wild beast that attacked them evil, for they could not make rash decisions and only charged in at the thought of food.

Over the years, Brimir actually used his animal prowess to win over most of the region's wild beast. Den after den of predators became allies of the small village and revered the bear-man Brimir. Eventually, the non-lycanthrope bloodlines of the village faded away and the place became a beacon for shape changers and shifters as well as other lycanthropes. Brimir slowly transformed the village into part of the very wilds itself and built his town's , now known as his den's, lair amongst the wild.

Brimir leads his den with the assistance of a council made up of representatives for all types of lycanthropes and shape changers. The full den has grown slowly to roughly about 400 members.

Adrian
Council representative of the wererats

Damien
Council representative of the werewolfs

Gregory
Council representative of the wereboars

Nelo
Council representative of the weretigers

Weapon and Armor Proficiency: Brimir is proficient with all simple and martial weapons, light armor, medium armor, and shields (except tower shields).

Fast Movement (Ex): Brimir’s land speed is faster than the norm for his race by +10 feet. This benefit applies only when he is wearing no armor, light armor, or medium armor and not carrying a heavy load. Apply this bonus before modifying Brimir’s speed because of any load carried or armor worn.

Illiteracy: Brimir does not know how to read and write.

Rage (Ex): Brimir can fly into a rage a certain number of times per day. In a rage, Brimir temporarily gains a +4 bonus to Strength, a +4 bonus to Constitution, and a +2 morale bonus on Will saves, but he takes a –2 penalty to Armor Class. The increase in Constitution increases Brimir’s hit points by 2 points per level, but these hit points go away at the end of the rage when his Constitution score drops back to normal. (These extra hit points are not lost first the way temporary hit points are.) While raging, Brimir cannot use any Charisma-, Dexterity-, or Intelligence-based skills (except for Balance, Escape Artist, Intimidate, and Ride), the Concentration skill, or any abilities that require patience or concentration, nor can he cast spells or activate magic items that require a command word, a spell trigger (such as a wand), or spell completion (such as a scroll) to function. He can use any feat he has. A fit of rage lasts for a number of rounds equal to 3 + Brimir’s (newly improved) Constitution modifier. Brimir may prematurely end his rage. At the end of the rage, Brimir loses the rage modifiers and restrictions and becomes fatigued (–2 penalty to Strength, –2 penalty to Dexterity, can’t charge or run) for the duration of the current encounter.

Brimir can fly into a rage only once per encounter. Brimir can use this ability twice per day.

Trap Sense (Ex): Brimir gains a +2 bonus on Reflex saves made to avoid traps and a +1 dodge bonus to AC against attacks made by traps.

Improved Uncanny Dodge (Ex): Brimir can not be flanked. This defense denies a rogue the ability to sneak attack Brimir by flanking him, unless the attacker has at least four more rogue levels than Brimir has barbarian levels.

Damage Reduction (Ex): Brimir has Damage Reduction. Subtract 1 from the damage Brimir takes each time he is dealt damage from a weapon or a natural attack.

Alternate Form (Su): Brimir can assume the form of a black bear or a bear-humanoid hybrid.

Curse of Lycanthropy (Su): Any humanoid or giant hit by Brimir’s bite attack in animal or hybrid form must succeed on a DC 15 Fortitude save or contract lycanthropy.

Improved Grab (Ex): To use this ability, Brimir must be in bear form and must hit with a claw attack. He can then attempt to start a grapple as a free action without provoking an attack of opportunity.

Skills: Brimir has a +4 racial bonus on Swim checks in any bear form.

Alternate Form (Su): Brimir can shift into animal form as though using the polymorph spell on himself, though his gear is not affected (except for his magical breastplate that is made to change with the form), he does not regain hit points for changing form, and only the black bear can be what he shifts into. He does not assume the ability scores of the black bear, but instead adds the black bear’s physical ability score modifiers to his own ability scores. Brimir also can assume a bipedal hybrid form with prehensile hands and animalistic features.

Changing to or from black bear or hybrid form is a standard action.

If slain, Brimir reverts to his dwarven form, although he remains dead. Separated body parts retain their animal form, however.

As a natural lycanthrope, Brimir has full control over this power.

Low-Light Vision (Ex): Brimir has low-light vision in any form.

Scent (Ex): Brimir has the scent ability in any form.