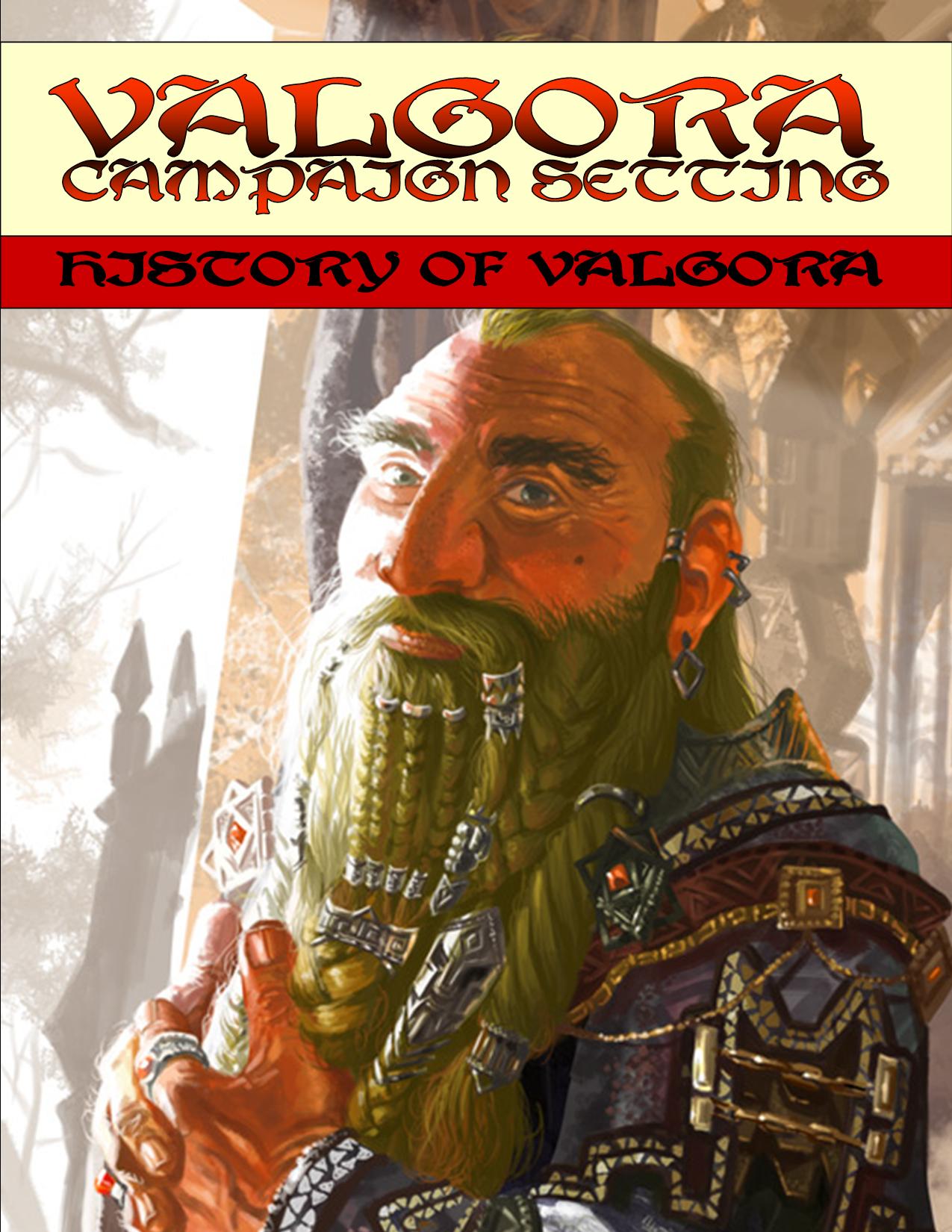 Valgora has a vast and complex history, with parts of the far past forgotten to all but a few well-traveled adventurers. The world has seen much, and will see much more.

All cultures of Valgora have adopted a universal time system. There are 19 months of 19 days (361 days total), with a "inter-calendar" new year period of 4 days (5 days every fourth year) where there is worldwide feasting and festivities. This new years celebration begins on the day of the vernal equinox at Sykuin.

Weeks are not necessarily an understood concept on Valgora, but there is a common-place track of time known as the "ten day" as well as the "moon's cycle" which help the common folk keep track of how long things take to reach or pass.

Valgora uses the Dated Year system. There are two ways to classify a year in the Valgorian system: Dated (DY for dated year) and Undated (UY). Undated years are typically before recorded history or used for close guesses.

Long ago, legend tells of a different world. The lands were spread out as the mighty sea roared between Ghikva and Malsvir, and society was bleak. Not much is known of the time before the tidal change. What is known is sporadic information picked up from the few remaining artifacts that lie in the hidden corners of the world, and at the deepest bottoms of the ocean's floor. The human population was known to be the only major population, if not the only, as no sign of non-human life has yet emerged through historical dig sites. The only solid fact is that society had fell into an immoral lifestyle, and was punished. Not by a Deity of any sort, but by the first known coming of non-human life.

The Radiant Dragon Talamon came into being through unknown methods. A creature of great power and good intentions, he was saddened at the loss of heart of the world. Thus, he sought out the few good souls remaining, and took them to a far away continent. He told them to rebuild the world into a better place. The rest of the world, Talamon wiped clean. Using his final breath and prayers, he pull together the lands of the world from the distances of the ocean into the super mass they are now, so that all could live together. Without a mate, he also produced one solitary egg. It is known that through generations, Valgora has always lived under the presence of but one Radiant Dragon, and peace, at least for the most part, has remained since the great tidal change.

DM Note
The "Forgotten Past" era - which is set in a alternate future of Earth in the year 2055, can be played using the D20 Modern System. That setting is available here.

The Exploratory years and the Discovery of Hesjing[edit]

Around 4,000 years after the great tidal change, the world had forgotten its past. History became myth, and rotted away in rare scrolls in back alley libraries, labeled Novels. Humans lived beside unnumbered other races, and all races had an inborn thirst for adventure and discovery. It was with this discovery that sailors finally began to explore the sea again. Within years, the only other major land, the Island of Hesjing, was discovered. In time, with the advancement of ship-technology, Hesjing's location would become barely a two-hour trip from the nearest points on the mainland, and it nestled roughly between Ghikva and Malsvir's main border. This fact led to it quickly becoming a vast port city, hosting great commerce and the most exotic market in the known world.

Hesjing, to this day, has never been deemed as a country in its own right, but has always held home to the reigning City-State rule of its port city Talara. The only other settlements on the island, a farming village and a druidic encampment, found no harm in this and have always willingly been under Talaran law. Eventually, Corsdin, the current living Radiant Dragon, made his way to the piece of land that didn't quite make it all the way back under his ancestor's prayer: the Island of Hesjing. He loved it so much he made its major mountain: Mt. Hurthi, his new home. It is from the place that all of his kind have lived since.

Corsdin took great joy in conversing with the residents of the newly formed Talara, and it was with great pride that he appointed its first Urathear, or King, of Talara. After great studies of the people of the Island, he choose Rian Caex, a local blacksmith, as the Urathear of Talara. Rian was a good soul with a wise mind, and since that day, his line has always ruled Talara in the most noble and just of manners.

The tidings of War and Modern Day[edit]

Sadly, peace is not an immortal thing. In recent years, rumors have begun to amass that Thraun, heir to the throne of Malsvir, wishes to control more land than his father does. He has been amassing an army for many years. As of current, the army is not quite ready for war. However, the knowledge of this has led to fear and paranoia throughout the world, and many communities have begun to train themselves for war as well.

Because of this, weapon smiths and armor-smiths have created thousands of new and fascinating equipment with the new found wealth they have earned, as every day commoner's begin to purchase items to defend themselves. Velor, the current living Radiant Dragon, is quite aware of the change in thought, but has not yet spoke about it to anyone. His thoughts are still unknown, as are his intentions.