Jump to: navigation, search
This race is intended to replace humans in the Hyrule campaign setting. It is not balanced to be used alongside the human race. 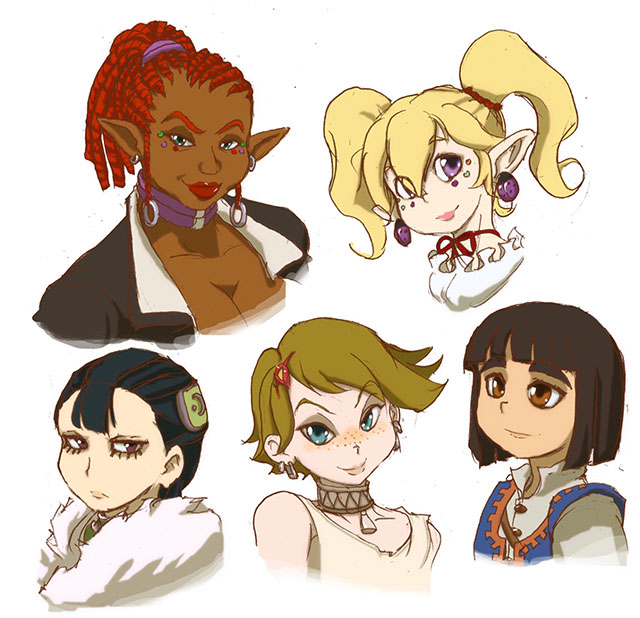 A typical hylian stands between 5 and 6 feet, and weighs from 125 to 250 pounds. Hylian skin shades range from nearly black to very pale. Hair grows from the scalp in one color from black, blonde, various shades of red and brown, navy blue, and sparsely more exotic hues—but in most cases, hair gradually fades into gray and white starting from about middle age. Males often but don't always grow hair from the lower part of their face. Hylians bear small ears that extend from either side of their head, like gerudo. These ears often end in upwardly-protruding points.

Almost all hylian features are inherited from parents or grandparents, with few if any random mutations seen in offspring.

Hylians reach adulthood in their late teens and rarely live beyond a century.

Compared to other races, hylians are very organized. It is normal and even expected for every adult within their population to have a profession or other occupation that contributes to their society as a whole. Their economies are very robust, their military forces are often well-trained, and their libraries of knowledge tend to be relatively deep and broad.

Unlike most races, hylians tend to be very sympathetic towards creatures outside their own race, often even when the sentiment is not mutual. It is this compassion that earns them the respect of most other races, particularly gorons and sea zora, who are traditionally the closest allies of hylians.

Hylians are largely urban, with few of them not living in well-constructed homes on village streets. Hyrule Castle Town is the most populous gathering of hylians, and home to the Hyrulean Royal Family—who many hylians believe to be the rightful rulers of not only their race but all of the Hyrulean continent.

Hylian names encompass many styles and originate from diverse cultures, but each is most likely comprised of two syllables. Surnames are rarely used except for nobles or royalty.

The most widespread and influential people of Hyrule proper, the familiar hylian race is comprised of social creatures relatively advanced in the ways of magic and technology.
Ability Score Increase. All of your ability scores increase by 1.
Age. Hylians reach adulthood in their late teens and live less than a century.
Alignment. Hylians vary wildly in alignment, but as a whole have a slight tendency towards lawful good.
Size. Adult hylians are usually between 5' 0" and 6' 2" tall. Your size is Medium.
Speed. Your base walking speed is 30 feet.
Chosen by the Gods. When you roll a 1 on an attack roll, ability check, or saving throw, you can reroll the die and must use the new roll. You must complete a short rest or long rest before you can use this trait again.
Languages. You can read, write, and speak Common. 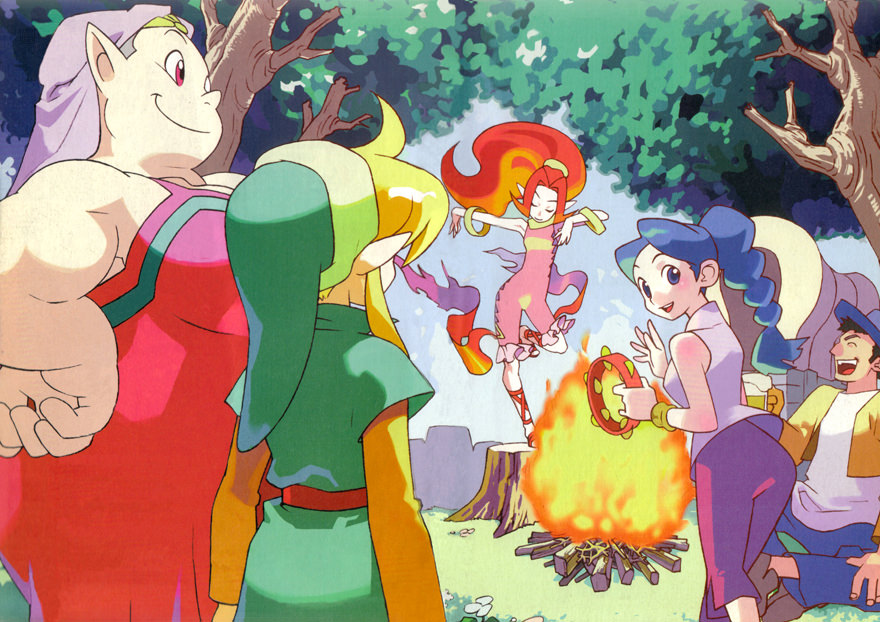 Your ancestors have spent their lives in distant villages, working farms, or even living out of dimly lit caves—on the fringe of what most hylians would call society. Unlike most members of your race, your ears might be rounded instead of having points. You likely have brown, red, or black hair.

The following traits replace the Ability Score Increase and Chosen by the Gods traits.
Ability Score Increase. Your Constitution score increases by 2, and your Charisma score increases by 1.
Improvised Skills. When you make an ability check using a skill in which you lack proficiency, you may add a +1 bonus to the roll.
Endurance. When you are reduced to 0 hit points but not killed outright, you can drop to 1 hit point instead. You can't use this trait again until you finish a long rest.
Profession. You are proficient in the one of the following skills: Animal Handling, Sleight of Hand, Religion, or Survival. Alternatively, you are proficient in farmer's tools or any one artisan tool.

Your ancestry leads right back to the incarnation of the goddess Hylia herself, whether you realize it or not. Depending how pure your lineage is, your ears may be particularly long and pointed. You hair and skin are fairer than most.

The following traits replace the Ability Score Increase and Chosen by the Gods traits.
Ability Score Increase. Your Wisdom score increases by 1 and your Charisma score increases by 2.
Cantrip. You know one cantrip of your choice from the sage spell list (or the cleric spell list). Charisma is your spellcasting ability for it.
Hylia's Protection. You have resistance to radiant damage.
Courage. You have advantage on saving throws against being charmed or frightened.
Keen Senses. You are proficient in the Perception skill.

You are part of an ancient race that was once separate from hylians—a race whose existence has been forgotten by many, perhaps including you. You are one of the few sheikah whose genes have not yet been completely diluted among hylians. Your tan skin, white hair, and stark red eyes are proof of this.

The following traits replace the Ability Score Increase and Chosen by the Gods traits.
Ability Score Increase. Choose between Intelligence and Wisdom. Your chosen score increases by 2, while the other score increases by 1.
Divinely Guided. Whenever you make an attack roll, an ability check, or a saving throw and you don't have disadvantage, you can choose to gain advantage on the roll. You can use this trait after you roll the first die, but before the outcome is determined. Once you use this trait, you must complete a long rest before you can do so again.
Fleet of Foot. Your base walking speed increases by 5 feet.
Seeker of Truth. You are proficient in either the Arcana skill or the Insight skill.
Extra Learning. You can read, write, and speak Ancient. Alternatively, you gain proficiency in any one musical instrument of your choice. 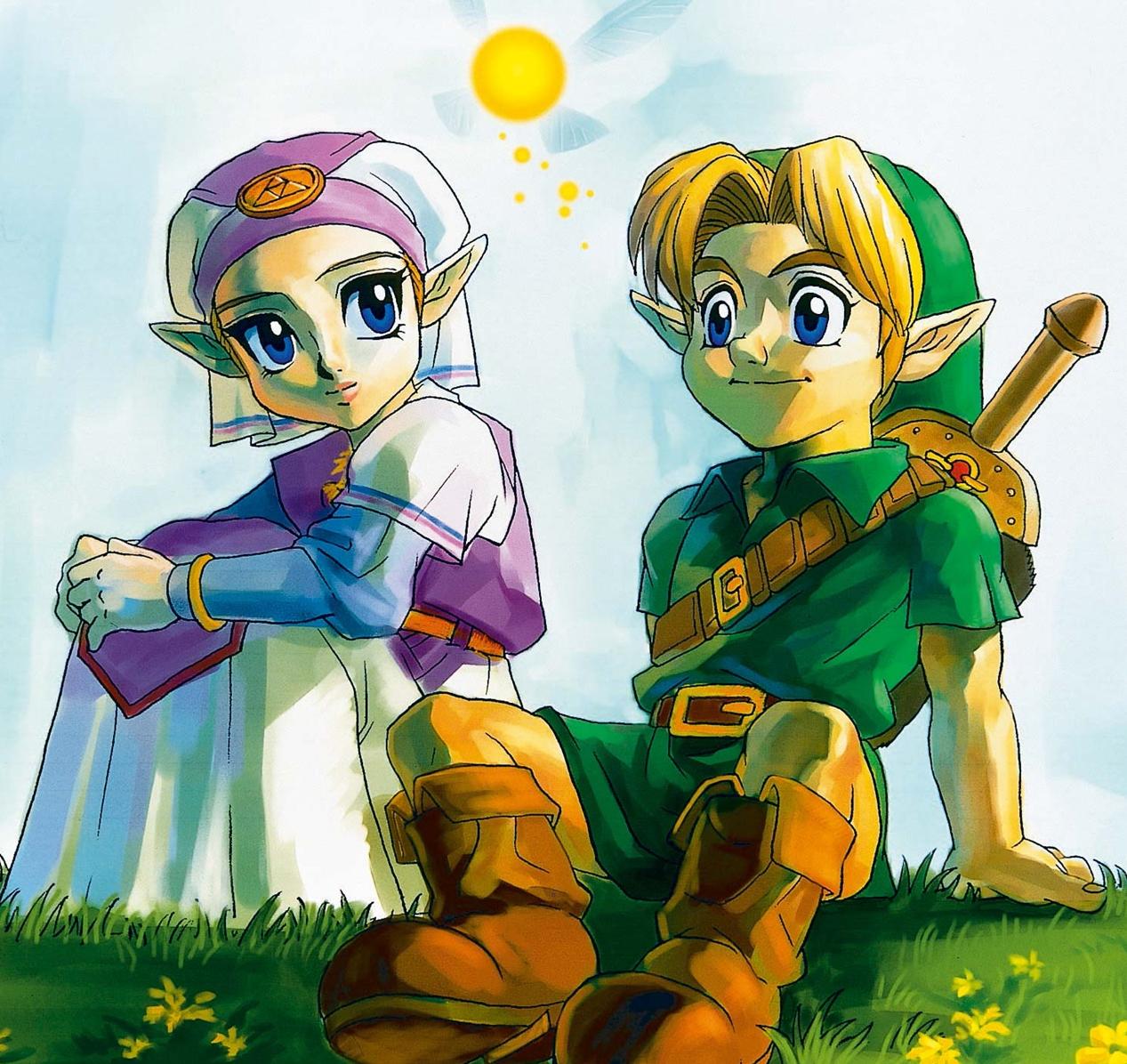 This variant assumes use of the magic points and stamina points rules of the Hyrule campaign setting.

You are part of a tribe that separated from most hylians generations ago. Your people ancestrally live in a magically enchanted region of the sky, known as Cloud Tops. Unlike most hylians, your hair is assuredly of a stark pinkish-red hue, and you have inherent mastery over some wind-based magic.

The following traits replace the Ability Score Increase and Chosen by the Gods traits.
Ability Score Increase. Your Intelligence, Wisdom, and Charisma scores all increase by 1.
Magic Adept. Your people are unusually talented with spellcasting. Your magic point maximum increases by 2.
Wind Magic. You know the touch wind cantrip. You can cast feather fall by expending 2 magic points. Starting at 3rd level, you can cast skywrite by expending 3 magic points. Starting at 5th level, you can cast fly by expending 5 magic points. Charisma is your casting ability for these spells.
Canny Wisdom. You are proficient in the Insight skill.
Extra Language. You can read, write, and speak Zoran.