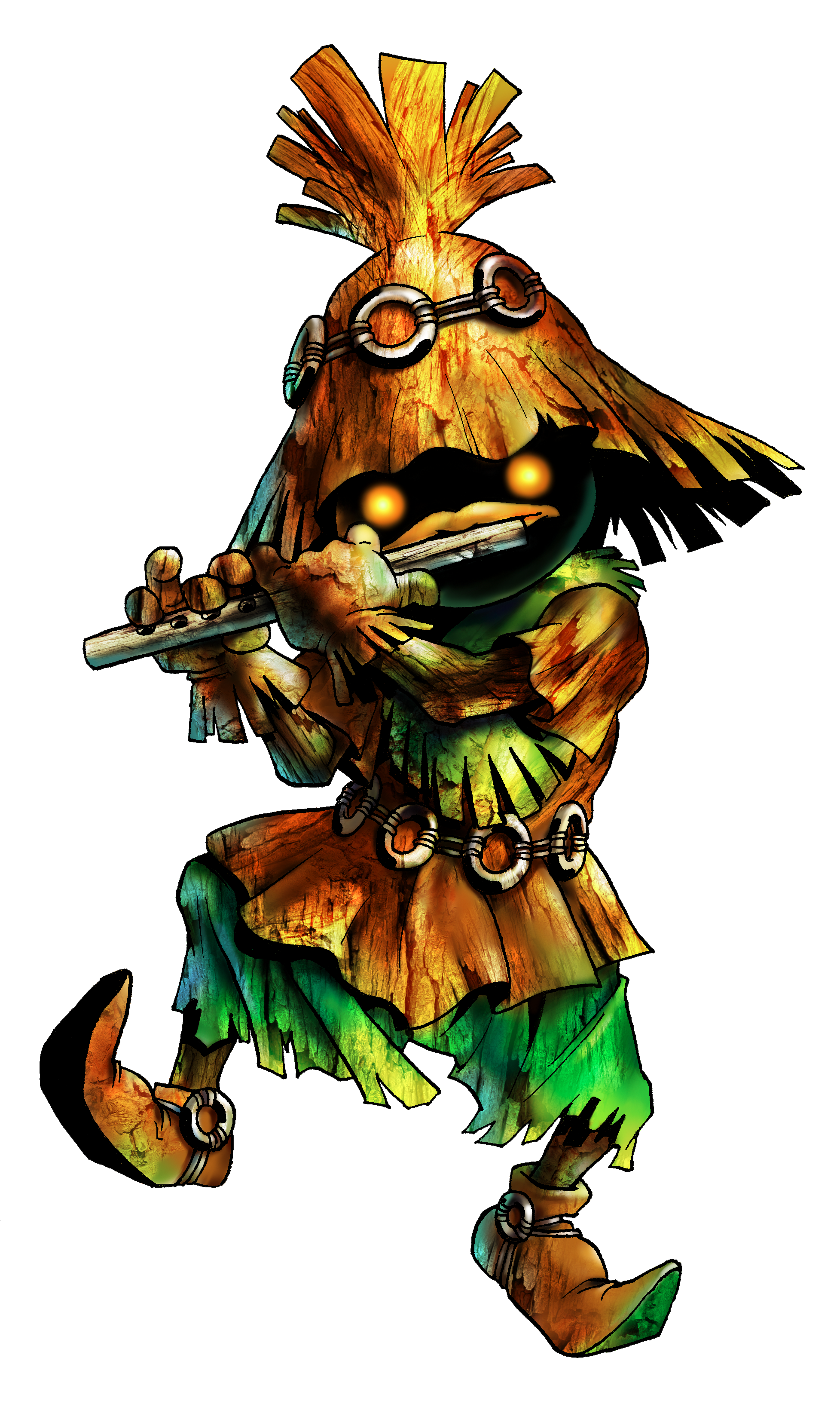 The creation of a skull kid is shrouded in myth and mystery. As they dwell almost exclusively in forest depths, however, most myths revolve around this in some way. The most prevailing belief is that when hylian children or kokiri become lost in woodlands and consequently perish within them, they are reborn or transformed into skull kids. Others believe skull kids are magically created by the Great Deku Tree, much like kokiri and koroks. Even skull kids themselves are unsure; the earliest memory any one of them has is wandering the forest alone, inborn with knowledge and instincts comparable to any humanoid adolescent.

Once created, a skull kid does not physically or mentally age. In body and mind, it is an early adolescent—comparable to a hylian around age 10 or 11—for its entire life. There are no physical differences between males and females, but nonetheless, most of them have a gender they identify with.

In appearance, a skull kid resembles a thin scarecrow that stands a little under 4 feet tall. Indeed, its limbs, body, and even head appear to be comprised of animate straw, clay, or other common materials. Just like any living creature, removing or damaging these materials would cause the kid pain and injury. A skull kid's face features beady eyes that glow a color between yellow and red.

It is commonly believed that skull kids are undead, but they react to magic and other phenomena as living creatures do.

Most skull kids live in small groups of other skull kids, deep within dark woodlands and far away from most other cultures. These ones usually live playful lives among themselves, spending most of their time playing songs on instruments they have crafted, or playing tricks and games with one another.

A minority of these skull kids manage to leave these forests to dwell among civilization. They are generally seen as aberrant by most other humanoids, but not subject to outright persecution like moblins or other monsters. These "civilized" skull kids are often beggars, entertainers, or seekers of odd jobs, as their chaotic and childish nature makes traditional employment nigh impossible.

These cursed, magical children wander through forests for centuries, playing songs and tricks alike.
Ability Score Increase. Your Dexterity and Constitution scores both increase by 1.
Age. Created from cursed children, skull kids are "created" at the apparent age at which they will die. Although a skull kid doesn't age, one will rarely live beyond 200 years.
Alignment. Skull kids follow no rules and no laws, and steal from others for fun. They have a strong tendency towards chaos, and a very minor tendency towards evil.
Size. A typical skull kid is just under 4 feet tall. Your size is Small.
Speed. Your base walking speed is 25 feet.
Eternal Youth. You do not age, and are immune to any magical effect that would cause you to age.
Musical Savant. You are proficient with one musical instrument of your choice from fiddle, flute, horn, ocarina, maracas, or recorder.
Immutable. Your twisted mind and body help you to resist subtle magic. When you make a saving throw against a spell or magic effect that doesn't inflict damage, you make the saving throw with advantage.
Languages. You can speak, read, and write both Common and Deku.
Subrace. A skull kid can be either Free or Lost. Choose one of these subraces.

A free skull kid may have wandered the forest for years, but managed to escape before the curse could take its full toll. Although this skull kid has been irrevocably changed, and retains few memories of its former life, it can still function in society as a sane individual.

A free skull kid's face no longer resembles what it might have been in a former life, but hasn't been fully reshaped either. Instead, it usually appears to be a pitch-black void save for its eyes and lips, or occasionally something resembling a scarecrow.

Ability Score Increase. Your choice of either your Wisdom score or Charisma score increases by 1.
Navigator. You are proficient in the Survival skill. You have advantage on Wisdom (Survival) checks to navigate or avoid becoming lost.
Woodland Weapons. You are proficient with blowguns, clubs, and slingshots. If you would otherwise become proficient with one of these weapons you instead gain a +1 bonus on damage rolls with it.
Fleet of Foot. Your base walking speed increases to 30 feet. 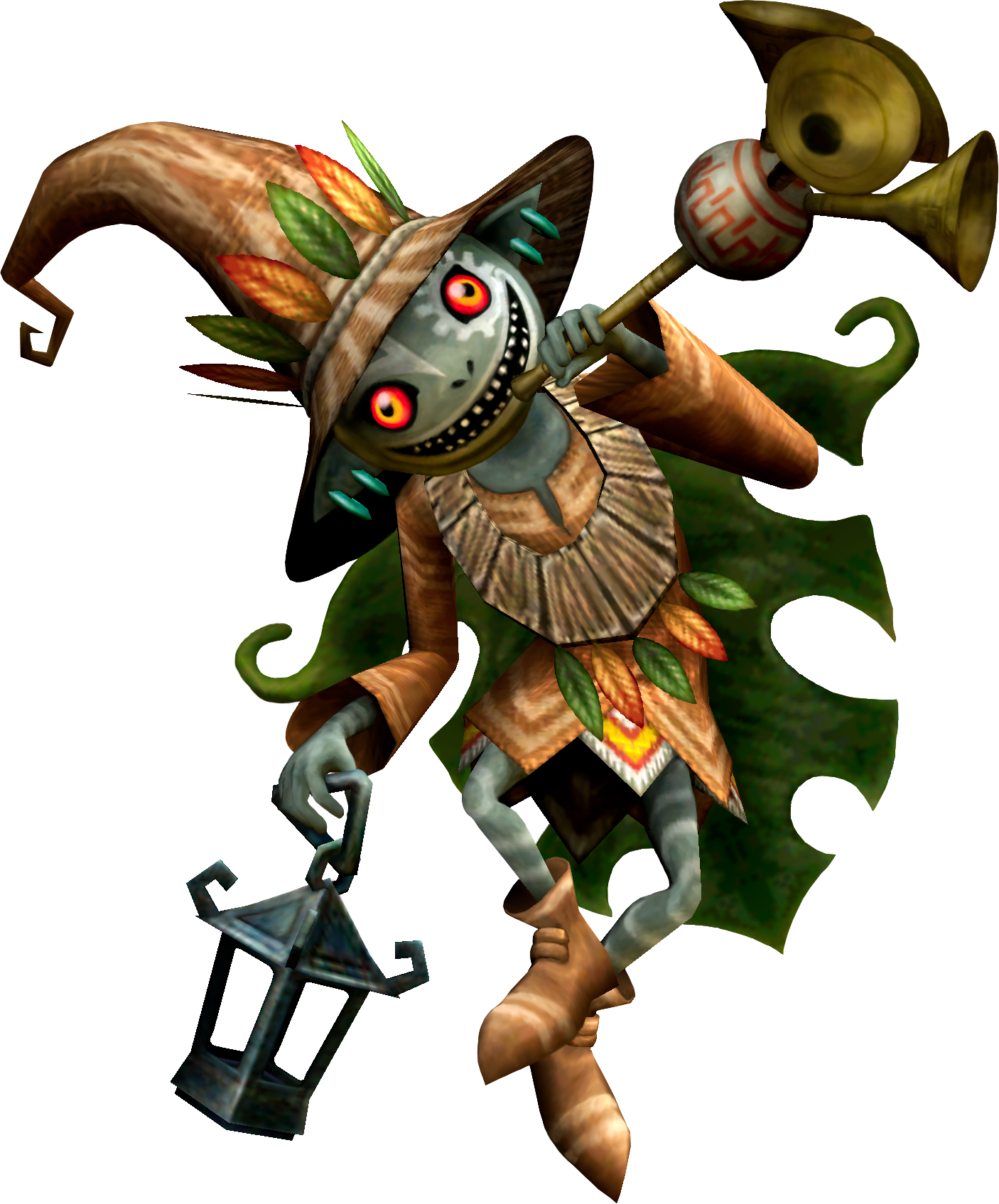 This subrace assumes use of the magic points and stamina points rules of the Hyrule campaign setting.

A lost skull kid is one who has accepted the forest's curse, and likely has spent over a century in the forest that cursed it—if it ever even escaped. One such as this has become at least partially insane, but adapted to living alone among woodlands.

A lost skull kid's face no longer resembles what it might have been in a former life, instead being fully recreated into something bizarre and twisted. Some have fangs, others have duck-like bills, and more still resemble scarecrows, but none seem to resemble any known living creature.

Ability Score Increase. Your choice of either your Dexterity score or your Constitution score increases by an additional 1.
Insanity. Your state of mind is fragile, but erratic. You have a -2 penalty on all Wisdom saving throws, but you can't be charmed or frightened.
Magic Adept. Mysteries of the forest give you supernatural energy. Your magic point maximum increases by 2.
Skull Magic. You know the druidcraft cantrip. You can cast conjure marionettes at its lowest level by expending 2 magic points. Starting from 3rd level, you can cast either conjure marionettes or misty step as a 2nd-level spell by expending 3 magic points. Starting from 5th level, you can cast conjure marionettes as a 3rd-level spell by expending 5 magic points.
Forest Survivor. You have advantage on Wisdom (Survival) checks to find food or hunt animals in forests, jungles, swamps, or other areas of abundant flora.