An average anouki stands at a height of only 5' 5", but has a bulbous body much wider than that of a hylian or gerudo. A typical anouki's face is particularly round, almost spherical. Facial features include flat noses, pink cheeks, and beady eyes that altogether make them seem doll-like.


Small deer-like antlers sprouting from their heads, but these horns are mostly vestigial. Although few anouki take to the life of adventuring or fighting, those that do make use of these antlers as surprisingly effective weapons.


The bodies of anouki are well-adapted to the frigid environments in which they live. Compared to most races, a typical anouki has a large amount of dense fat in its body to provide warmth. Consequently, an anouki has a wide and squat form, with short legs that appear to waddle whenever it walks. Despite their bulbous size, anouki are excellent swimmers, and their short legs end in webbed feet that are useful for both pushing water and gripping tightly to ice or other terrains.


Males of adult age frequently grow white-colored facial hair, but there are otherwise minimal differences between male and female anouki. The race reproduces sexually in a manner similar to hylians.

It is said anouki never lie, which in many cases might be true. That isn't to say they are kind— indeed, anouki don't sugarcoat the truth, and their honesty can come off as rude to those unaccustomed to their norms. As they are not accustomed to deception, anouki are often easily deceived.


Anouki are very prone to acting like other anouki to fit in. They are quick to alienate outsiders even from their own race. Despite their cliquish nature, anouki are not inherently cruel and are particularly averse to violence.


These Arctic-dwellers usually have an easy time surviving in their habitats. Few monsters are native to the frigid islands on which they prefer to live, yet fishing yields plentiful food for their lazy lifestyles. As such, anouki rarely actively engage in hunting or sport and instead occupy themselves with intellectual pursuits. Their cultured villages usually have a significant emphasis on trends, fashion, and education— including the practice of minor magical spells learned through study and practice.


Anouki almost universally wear thick coats woven from wool or animal hide. This practice is so frequent and the coats are so uniform that outsiders often believe this garb is part of an anouki's body.

Anouki names are usually not specific to males or females. A typical anouki name is two syllables, and one almost always ends in either an "oo" or "oh" vowel sound. 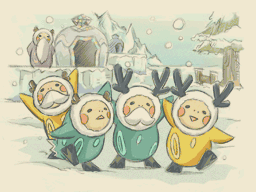 Waddling like penguins, but with antlers like moose and faces resembling hylians, anouki are quite a sight. Their blubber-filled bodies are most at home in cold climates.
Ability Score Increase. Your Constitution score increases by 2. Your Intelligence, Wisdom, or Charisma score increases by 1.
Age. Anouki reach adulthood by the age of 20. One can live to an age of 120.
Alignment. Anouki arrange themselves in an organized society, and can barely imagine any among them breaking convention— but are quick to ridicule those who do. Most anouki are lawful neutral.
Size. An anouki is squat and usually stands between 5 and 6 feet. Your size is Medium.
Speed. You have a base walking speed of 25 feet and a swim speed of 25 feet.
Cold Resistance. You have resistance to cold damage, allowing you to survive naturally cold climates with ease.
Horn Attack. Your horned head is a natural weapon, which you can use to make melee weapon attacks. You are proficient with your horns. On a hit, this weapon inflicts piercing damage equal to 1d4 + your Strength modifier. Your horns are considered a light weapon for the purpose of two-weapon fighting.
Traction. You can move across ice or other slippery terrains as if it were normal ground. You have advantage on any Strength checks or saving throws to avoid being knocked prone or avoid being physically forced from your position.
Erudition. You gain proficiency in tool of your choice from: apothecary's kit, fishing tackle, navigator's tools, water vehicles, or one artisan's tool of your choice. Alternatively, you can learn any one language of your choice.
Cantrip. You know one cantrip of your choice from cryonis, elemental aegis, frostbite, prestidigitation, ray of frost, resistance, and step up. Intelligence is your casting ability for this spell.
Languages. You can speak, read, and write Common and Anook.