To give a better feel of the world, both geography from the world of Paradise as well as after Paradise Lost is provided. Just in case you want a campaign before the depressing stuff.

The World as it was Known[edit] 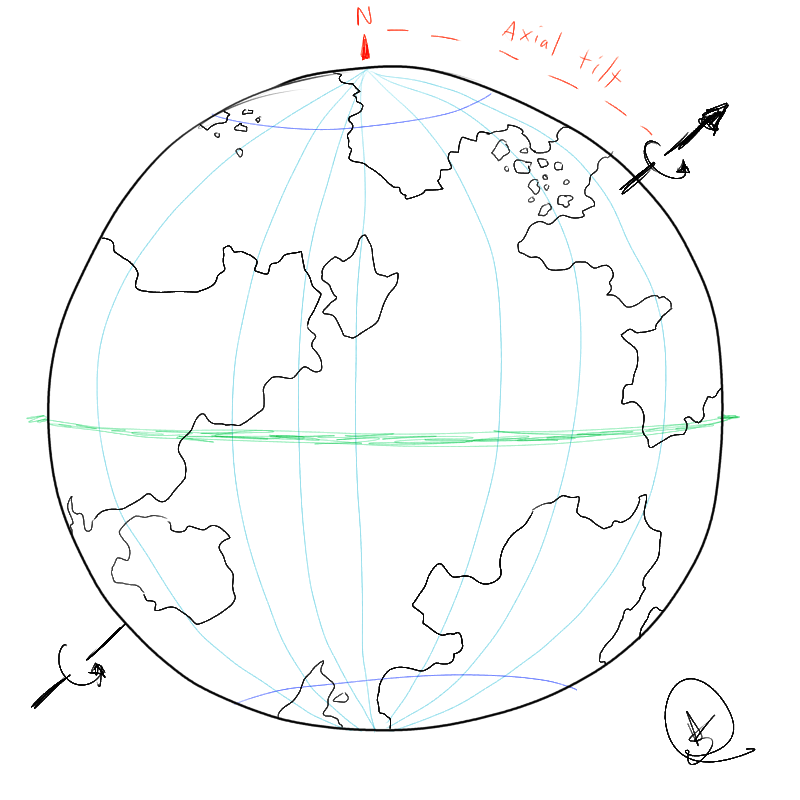 The Old Planet with its axial tilt 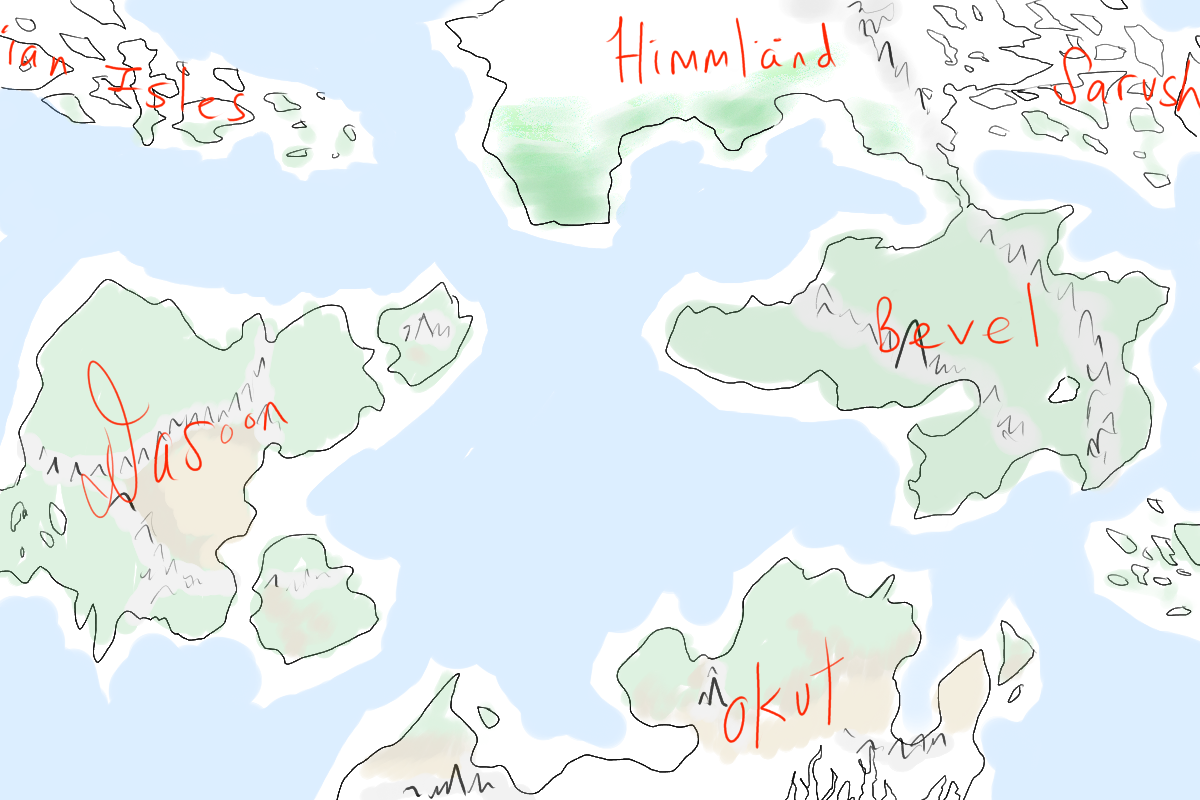 A generalized map of the Old World

Back on Paradise, the world was yet to be fragmented, and remained one whole planet. It was a world not that different from others we may think of in other settings. The planet has a rather moderate axial tilt on which it rotates. Along the equatorial line is were the most tropical temperatures occur. The north has a region of cold simple referred to the Arctic. The south also harbors such a region of cold, but in juxtaposition to a much wider range of temperatures due to a wide array of geographical features like steppes and valleys allowing for many different winds and moisture to accumulate. The seas are bountiful in certain areas, bearing edibles, while others may only harbor monsters.

The Old World hosts a variety of the classic environments, from tropical jungles to temperate coniferous jungles, sandy beaches to rocky cold shoals, frozen tundra to wild savannas and also scorching deserts, wide scenic plains to moors, warrens and frigid alps. The populations are just as diverse thanks to the wide array of climates. In addition, the Old World served as a conduit of sorts as the Natural World which touched with many abutting planes and other spatial anomalies. This sometimes would alter the environment and also introduce a special niche population to the area.

An example of this extraterrestrial influence is the githzerai and githyanki, who have traversed the worlds between in their space vessels. Another example is some of the swamps of Dasoon, where aberrant influence has altered the creatures and habitat, making them more exotic and dangerous. These small pockets are present through much of the Old World, with influence from the Feywilds being the largest.

These isles are connected to the east of Himmländ. For a stint of history, they were considered one with the whole continent. But the fractured culture and tribes that live here revolted and the map was redrawn in acknowledgement of their differences. Like Himmländ, it is composed of a lot of ice.

A temperate continent with the largest proportion of human inhabitants. It is connected to Himmländ via a strait formed by the ridge of the Igdrys Scepter. The land here is fertile for livestock with beautiful alps.

The largest continent of the old world, Okut is home to a great deal of wilderness and primal energies. The people here live in super-tribes made of an ancient, vast and complex network.

This continent is the third largest of the Old World, and it is home to one of the oldest human civilizations. There are three primary kingdoms and a smattering of diverse peoples and tribes about. The land here is very good for farming and is surrounded by bountiful waters.

The World of Shard Ne'Vaal[edit] 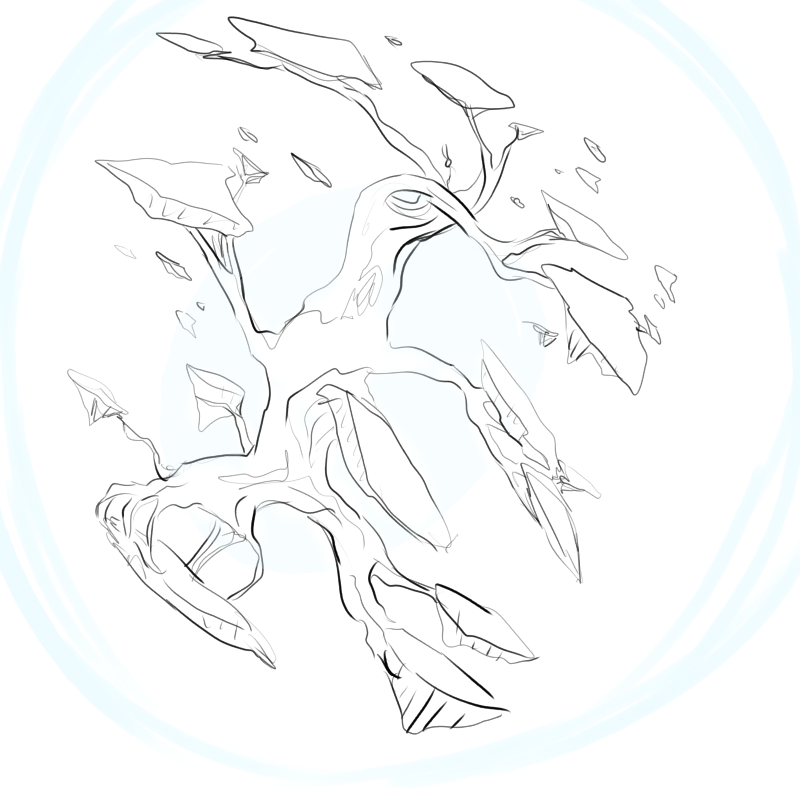 The current state of Shard Ne'Vaal and the World Tree 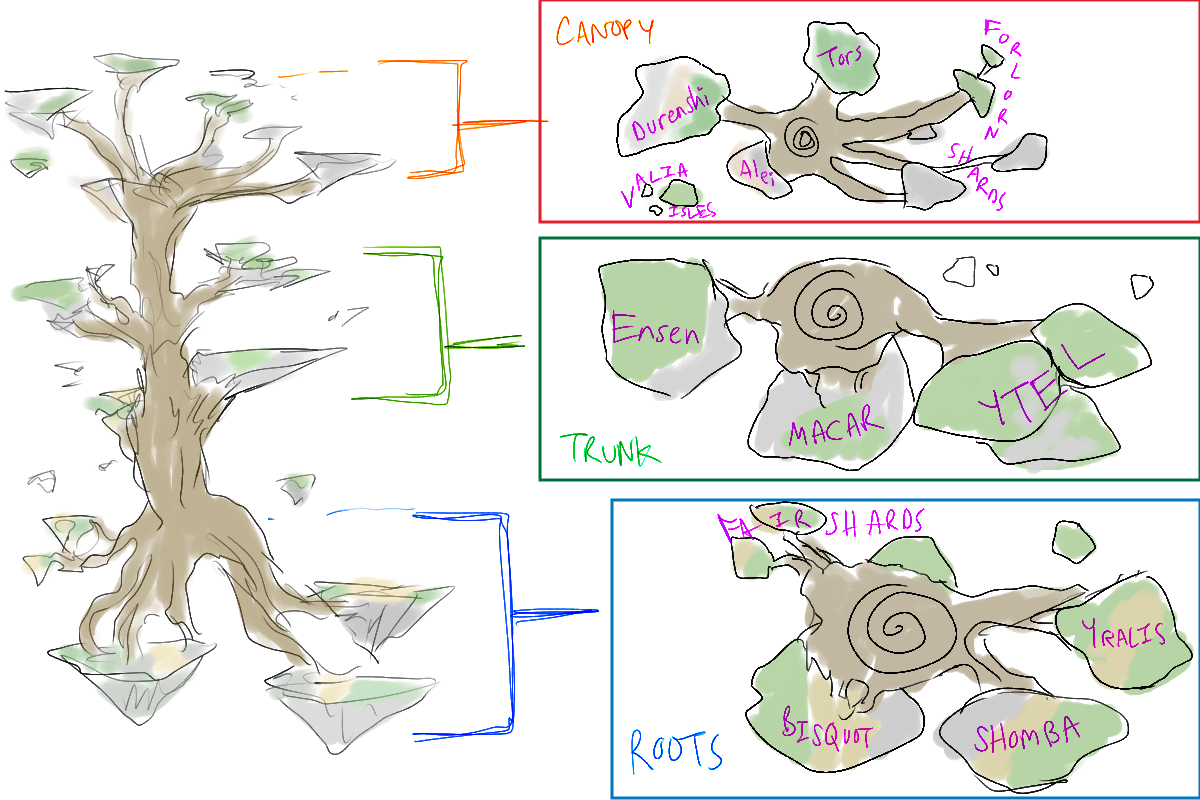 The stratified levels of the shards on the tree

The name Shard Ne'Vaal literally means "vile fragments" in the old tongue of Reth. It is fitting since the world is now just a mix of pieces of land that used to be whole, called shards. The "vile" part was mainly in regret of this happening in the first place, and views of the world as doomed. All the major shards are linked by the branches of Myrrh's World Tree, and it is also one of the only ways to move across shards unless one has aircraft, which is extremely limited to the point it is near nonexistent. Due to the structure of a tree, the world is divided into three sections: the canopy, the trunk, and the roots. Each level maintains a slightly different environment, as the shards are all pieces of the former world.

The world's environment is kept stable by a force field generated by the tree, which also keeps stray shards suspended from floating off into oblivion. It also ensures the shards have the minimal standards to sustain life by mimicking effects of atmosphere and weather. Since the world no longer has a spherical planet, the tree is the true axis.

All the greater bodies of water like oceans and seas have been cycled into the atmosphere and concentrated at the force field's highest point above the canopy. It is thus always more humid there compared to lower levels, and when it rains, deluges happen. These cascade down the shards to provide life to the other levels below. The water ultimately ends up at the roots, which is known to have a more shady environment. Water is reabsorbed by the tree and then channeled back up towards the canopy and released back into the force field atmosphere to be redistributed once more.

The upper level of the World Tree. The shards here have a mix of pieces of Dasoon, Hocheim, and the Sarushian Isles.

This is where the largest shards are located. Within the tree trunk itself are also transitory communities to aid travel between the levels of shards.

The lowest part of the tree is composed of Dasoon and Okut pieces mostly. There are a great deal of monsters here.