The original cosmology model used depicts a rather simple system of positive and negative forces. The natural world is seen as an intersection of various other planes, which explains the diversity of life. It also includes alien areas where interstellar beings sometimes walk the planes and end up on the planet. These other planes are grouped between two groups: the sun Yros, and the night Ragtha. It is believed that Yros created and Ragtha destroyed. Every element had its role in these two acts, and thus everything had two sides. Fire destroyed by burning, but it was also a giver of life and light. Water was needed to survive and thrive, but it could ultimately destroy in events like floods.

The overlap between these two spheres of influence were responsible for life and its changes. The models of the Old World cosmology usually depict the sun and night as halves of the universe, with the planet in the middle, and all other planes as circles which rotate about the world. 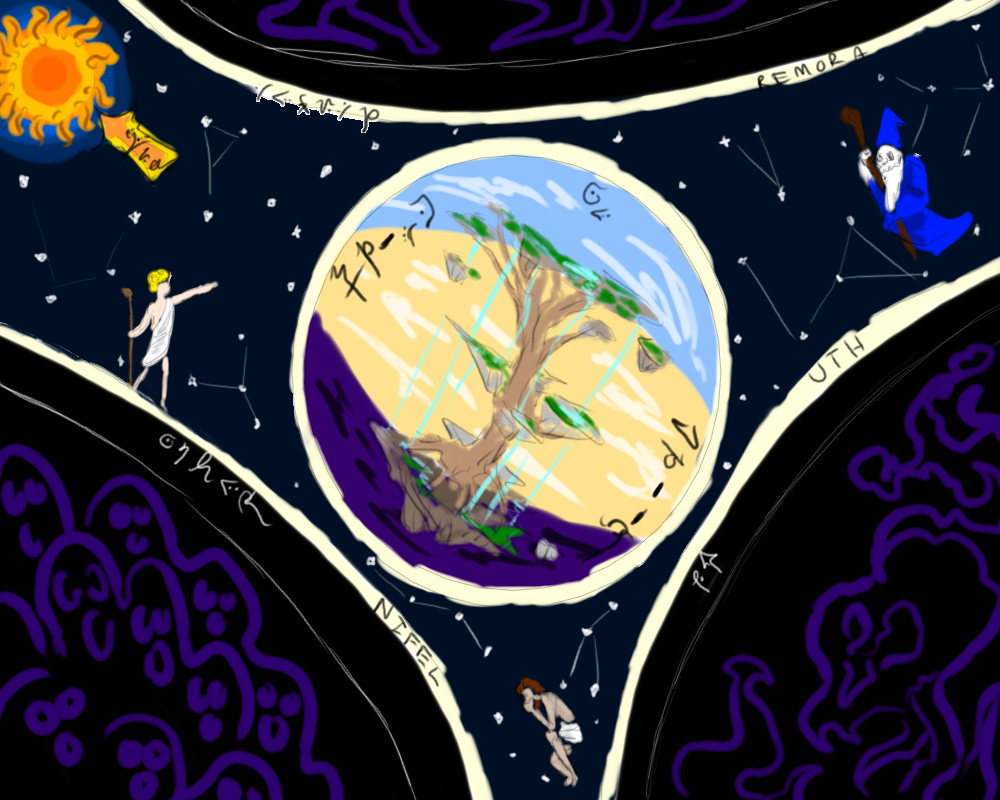 The Doomed Plane Cosmology, by Yanied

After the Gorge, the previous cosmology was shattered. There was a force which no one accounted for in the process of creation and destruction: the void. It was nothingness. It did not quite destroy because it had no action, no will, to do any harm. It did not create because it had nothing to make and produced naught. Also, due to the destruction of the world and creation of the World Tree, it became necessary to reassess the world and its place. The planes no longer were able to be accessed as the voids destroyed the threads which held the universe together. All the while this happened, night and sun continued, and people could not understand why it suddenly seemed like they no longer mattered due to this great abyss that threatened to render them nonexistent. Thus, all that surrounds the world is darkness and the void, without depiction of other realms or planes.

Some Shard Ne'Vaal depictions of the cosmology still retain the sun and night, but only at the fringes, no longer so important. Most don't include them anymore at all, as they do not see the positive and negative energies as perfect equilibrium any longer. The void is the greatest power and it cannot be defied. The World Tree now stands alone, amid the Three Hungers of Graghk, which revolve around, just over the horizon. Cosmologists have dubbed the Hungers as shards, or spheres, of Graghk, and they are Remora, Uth, and Nifel.

It is often said the Hungers are growing larger every passing year, and one day the World Tree's force field will falter, and they will all be turned to nothingness. It is therefore appropriate the new model is called the Doomed Plane. Some theorize there might even be a fourth Hunger, but this is conjecture.

It was once thought that the souls whom Valia smiled upon would be sent to the fields of everlasting glory. This plane was called Elysium. It is believed to be lost, possibly devoured or severed by the Gorge. However, whispers remain that there are floating isles somewhere in the sky in this broken world, isles which hold the key to achieving this paradise once more. But thus far this is all only speculation and old wives tales, as no one has found any traces of Elysium anywhere in Shard Ne'Vaal. Some who come close mysteriously disappear. The key lies with He'Nth, who continues to search for heroes worthy of her sister's fortune.

The original solar system of the world remains largely intact, like with the sun and moon. But a lot of other things have changed.