(Redirected from Tirr (3.5e Pantheon))
Jump to: navigation, search
This is a featured article! 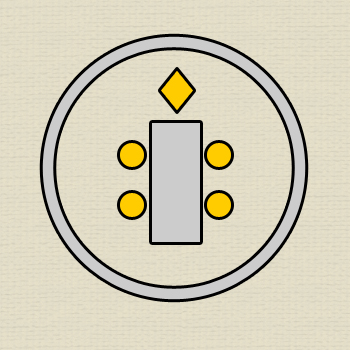 The Icon of the Pantheon, often distributed by their collective followers, especially those who worship in Silverfell, and surrounding communities. It depicts the Major Thrones to each side of the table, with the High Throne above them all. Circling the inner thrones is a ring symbolizing the Lesser Thrones.

The Pantheon of Tirr is a divine organization formed in the aftermath of the war against Varglokirr and his sealing with the Material Sphere, a construct of planar-folding brought forth by contributions from most of the surviving deities, chief among them Mana, Fate, and Tirros, which would eventually come to encompass all the planes of the mortal, ever-changing world of Tirr.

After the surviving deities sealed the mad-god, they ultimately found themselves at odds over the carnage and terrors of a war that lasted beyond mortal comprehension. The once ever-populous void of the Deific Sphere, once filled with many realms and deities, was now reduced to only a handful. In a very real way, the war had very nearly brought the gods to extinction. With time, controversy sprang up as a method of prevention was discovered: By binding their very beings to an oath, and to the organized court that it would create, such a terrible waste of life and potential would never again occur. This oath was called the Oath of the Pantheon, and all remaining members of the Pantheon uphold its terms, either out of interest for the greater good, or in order to preserve themselves.

The Oath, guarded and enforced by both Fate and Vanguard, keeps any and all deities who are bound to it restricted to the decisions of the Pantheon as a whole, which naturally did not sit well with all parties; Those who could not reconcile with the adaptation of the Oath became the Aesir, and were banished from the Deific Sphere in order to protect the plane, and by extension, to cut those deities off from the unlimited power that bathed the plane and therefore served as a font of divinity. While this action was not necessarily endorsed by all Pantheon gods, it became viewed as a necessary act in order to preserve a greater balance and to prevent future calamity that may have occurred in its absence.

The effects of the Oath, and breaking it, were something that was of constant discussion but were never witnessed until the Third Era, when the Goddess Sympatheia stole the Light from the Realm of the Gods, against the Pantheon's will, and therefore disintegrated completely shortly after she delivered it to the material plane of Tirr. This sight was witnessed by most of the living deities, both within the Pantheon and by the Aesir down below, and those who did not see it, came to feel the loss of a fellow deity, regardless.

Hierarchy of the Thrones

The Deities of the Pantheon gather together in a sub-plane of the Deific Sphere called Common Ground. This plane is unique in that it can never allow harm to occur to any party within it, and therefore serves as a essential and especially viable place to hold court. This is especially significant when considering the differing alignments and personalities of deities who constantly gather there.

Arranged in this plane are a number of thrones. The center of the plane holds a great ornate table, which hosts four thrones of impressive size and adornment, meant to signify their status as the Major Thrones– two on each end of the longer sides of the table. While at the end of the table, between the two sides, resides a slightly greater throne, the High Throne. Elevated slightly to the others, it is the greatest throne present affording to the power of the one possessing it.

Circling these thrones are 13 smaller thrones, at eye level with the court thrones. These Lesser Thrones extend to each side of the court, at even distances, with the center opposite of the High Throne, and the ends of the semi-circle ending behind the Major Thrones closest to it. Beyond these thrones is a large barrier, which holds aloft larger, more populated seating. This is known as the Gallery, where minor deities and heroes come to rest and watch as the Court proceeds.

While there is no strict restriction on individual virtues or vices, the Pantheon as a whole typically tends to lean towards the Good and Lawful alignments. This is due to the many deities that embody these alignments which generally outweigh the counterparts. However the inclusion of deities such as Serberus and Mephistopheles, and at such high levels of power, proves that this is not the rule.

The opposite holds true for the Aesir, which consists of a majority of Evil and Chaotic deities, but also contains those such as Bahamut and Undine.

The highest throne is the one with the most power. While considered to be on level with the rest of the pantheon's major thrones, this throne is able to veto any proposals by the other thrones, and serves as a mediator between the major thrones. It is the throne that is solely able to act upon all agreed-upon proposals.

The major thrones are the thrones that carry the weight of discussion and ultimately the votes that are cast in favor or opposition of them. The major thrones may oppose the high throne only if all thrones can agree to the course of action that is proposed, which is rare, considering the balanced alignments of the thrones. The current holders of the four thrones are:

Lesser thrones are often held by deities with divine ranks beneath that of the greater deities, but proven enough to actually hold seat in the pantheon. They are allowed to speak and bring issues and suggestions to light, and even propose topic for the next discussion, but aren't allowed to vote. There is not a limit to how many deities can hold lesser thrones.

Deities, usually the Demigods and Heroes of the Deific Sphere, in the gallery are restricted from speaking in the Pantheon, and are essentially spectators to the proceedings that occur in the Pantheon. Nonetheless, they are able to contact Lesser Thrones to speak for them, often through petition.