Silverfell lies on the southern tip of Halimeda, occupying the largest amount of land in all the world, effectively making it the largest country in the material plane of Tirr. Home to many different geographical features, and to many different types of peoples, Silverfell is one of the most diverse places in Tirr, and in fact, is often quoted to be the "melting pot of the world", due to its high content of various, often contradicting practices and cultures. While most regions are populated by only a few settlements here and there, Silverfell is populated by many; This alongside the vigorous and pious military it employs makes it arguably the only 'Superpower' in Tirr, though it has warred with Sol in the past, likely implying the desert region rivals its power. 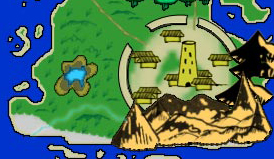 Subject to rather normal weather, Halimeda is the envy of the civilizations of Loupe, as those on the western continent are far less lucky, considering the way the rampant mountainous regions affect the local climates. Silverfell is just as normal, owing mostly to Halimeda temperate nature and flat surface. Most of Silverfell is defined by a mixture of grasslands and savannahs, though a small portion is coastline and forest regions, as well, owing mostly to the fact that Faelorn Forest is located directly on the northern boundary of Volare. Towards the west, the nation holds claim on the roads and bridges leading up to Fairus, and therefore has a large portion of nigh Aquatic environments to supplement its diversity.

Wildlife is to be expected for the various regions that occur in Silverfell, though travelers may also encounter the occasional underground creature when traveling near the former site of Godsreach, as the ascension that removed Godsreach also opened a breach into the underworld, though both Goldengate and the Drow kingdoms below try to regulate entry and exit.

Silverfell is said to have started when the races of Tirr first learned about the existence of the Pantheon of Tirr, from the very Aesir banished by the Pantheon. When these revelations occurred, the tale began to spread rather quickly. Some tribes began to support the Aesir, who while not always in the favor of the mortals, were at least tangible, and constantly interacting with lesser races; Some supported the Pantheon's actions, however, and began to worship the gods, far from the deific sphere. These factions endured tensions between faiths, and even ideologies, though no true fighting occurred until the effects the banishment had on the Aesir became apparent; The Aesir were forced into deep slumber due to their distance from the deific plane, and an inability to sustain their divine energies; Only by the sleep, and being immersed in their nature could they be sustained for long portions of time.

This caused the followers of the Aesirean deities to resent the Pantheon, and by association, its followers. The reasons were many, ranging from the Aesir being subjected to a cruel, undeserved fate, to those who simply wanted their deities to rise once more; Regardless of the reasons, the tensions came to a head as many of the Aesirean worshippers began attacking the others, forcing those who worshipped the Pantheon to be shunned, most fleeing cities of their birth in order to escape persecution.

Over many years, the exiled came to the southern reaches of Halimeda, and found in each other similar beliefs regarding the Pantheon, and sought to build a city of their own, to accept them. The city became known as Goldengate, a city that would open its gates to all, no matter their kind or creed, and accept them when none other would. The city faced many trials, the first of which being its defense from other nations. Other factors began to crop up, as well, such as the civil war that occurred a few centuries after the city's birth. Difference in political and religious beliefs once more split the nation in half; Goldengate's leadership, the King and the Grand Cleric, refused to allow Arcane magics within the region, claiming they were far more prone to corruption than the divine powers bestowed by those of the Pantheon. This prompted the people of Godsreach, who received wizards and sorcerers from all over the region, to cede from Silverfell, entirely, before using the banned arcana to lift itself up and into the air, creating the floating city that is, now.

The land has seen many centuries, since then, and while arcane magic is no longer outright banned, it is seen as taboo, and is restricted from being practiced by those of the military and upper class, either by law, or by shunning.

Ruled jointly by a King, and the Grand Cleric of the Opus Deius religious organization, which is based mostly in Goldengate. Both parties are usually aligned on most issues, though there have been cases in history when the two refused to cooperate, often resulting in one or both parties dismissals, or perhaps in even more dire situations, civil war. Such was the case when Godsreach separated itself from the nation, led by the former King of Silverfell.

Typically, and with few exceptions in most of recorded history, the King is selected from a line of princes selected by the Grand Cleric, and the Grand Cleric is selected from a line of female acolytes. These two lines are highly trained, even from birth, to suit their potential roles, later in life, resulting in cloistered, if extremely knowledgeable, potential leaders of the country. These selections are done by the previous two rulers, often near their deaths, each picking their successor from their stock. When one of the former leaders passes on, the other abdicates the throne, and the two successors are married in a wondrous ceremony that takes place for a week. This marriage is also why a ruler steps down when their counterpart dies; They provide each other counsel, companionship, and counterbalance to all natures of the other, and without this crucial element, the surviving leader is considered only half of a single whole, and one that cannot ever be remade.

Clerics always seem to dislike arcana, and are always devoted to the Pantheon of Tirr, given their position in the court and the organization that spawns them. Kings are generally far more welcoming to both Arcana and worshippers of the Aesir, though in times when the king cannot sway his counterpart, the country becomes somewhat harsh against these two subjects.

Silverfell is both the envy and the enemy of many countries. It boasts a sizable breadth of land, while also containing one of the most diverse, and most unified cultures in the entire world. This, however, is balanced by the interaction that Silverfell's leaders have with many other nations, often somewhat condescending, or even hostile in some situations, depending on the generation of leadership in Silverfell. At times, Silverfell will organize crusades against those it believes is 'infallibly evil' in either nature or custom, and at times, this has included Sol, Volare, and even Kerrigan, for various regions, but most notably because of each cultures ties to the Aesir, as well as Kerrigan's continued dispute over the city of Fairus and the roads and bridges leading to it.

The military of the nation is almost entirely made up of Paladins and Clerics of many different gods, but the majority follow Balthazar and the Great Mother, leading to more righteous beliefs being stressed within martial circles. Knights, Fighters, and other types of classes can sometimes be found working alongside military functions, but are rarely part of the military, itself. Sorcerers and Wizards, as well as other arcane classes, are banned from being part of the military, and are somewhat ran afoul of in the region, leading the practitioners of these arts to either do so in secret, or only lightly.

High ranking officers of the military often include Holy Knights and Fell Knights. These characters are usually lawful, especially in cases of the latter, observing the chain of command and the laws of their nation as they serve. Fell Knights are usually used for offensive measures, such as hunting down criminals or leading assaults against nations, since they can act out their usual tendency towards evil without causing much trouble towards their own country.

Citizens of Silverfell speak most languages, so prevalently, that it is nearly impossible that you will be unable to find a single one who does not speak a certain language, no matter how specific or secret (Except Druidic, of course). That said, the state recognizes only a small fraction of these, though a considerable amount more than most places, considering the wildly diverse area that Silverfell takes up.

Religion is one of the most prevalent items of Silverfellian culture, being a cornerstone of its history and citizen's way of life. Most citizens are pious supporters of the Pantheon of Tirr, though there are also the occasional Aesirean worshippers, as well. Tensions between the two remain as strenuous as always, and most are distrustful of known Aesirean worshippers, though this can vary. Certain Aesir command more respect and veneration than others, such as Bahamut or Undine, likely owing to their more placid and generous natures.

The citizens who live in Goldengate often call in the pinnacle of all mortal achievements, second only to the world, itself. While this may certainly be in large part exaggeration, the city is certainly just as impressive. Goldengate is the largest city in the world of Tirr, likely rivaling even the old empires of Kaladon and Lionel. It is densely packed with stone structures of varying sizes, offering large, central streets amidst many alleyways, and second stories are not uncommon, being the result of such a large population. The southeastern part of the city holds the Royal Grounds, a place of restricted entry, but from what can be seen, impressive beauty and magnanimosity. Silver statues of Pantheon gods line the streets, and the Northern edge of the city hosts the great cathedral of the pantheon, a structure maintained and used by the Opus Deius as a central headquarters, training Clerics and Paladins through the orders related to them.

A small town on the outlying reaches of the Silverfellian Savannah, leading towards the border of Volare, and near the bridge leading to Fairus. Damascus is mostly a trade city, but also hosts a sizable permanent population. It often serves as a rest-stop or first look into Silverfell for most adventurers and travelers, before they continue on towards their destination.

The port city on the western end of the region is located next to a large, natural bay, providing a perfect naval base and trade opportunity, as well as hosting immigration services from the other continent. A magnificent lighthouse sit upon a small island out in the bay, allowing for sea travel at night, as well.