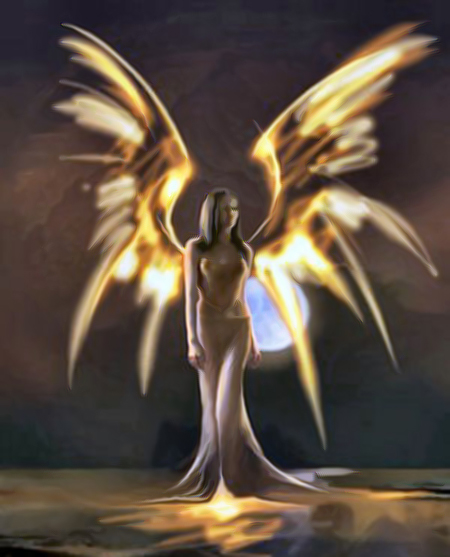 Helios Majora, the Goddess who lights all of Tirr as the First Star. The Morning is her nature, and her blessing.

Helios Majora, often called 'Majora' in circles familiar to her, is the larger of two heavenly bodies circling the world of Tirr in the Material Plane. While she does not pass Tirr as often as her smaller sibling, Minoris, she is by far the primary life-giver, warming the earth with her rays. She is praised by people of all professions and races, of all classes and planes, because of the universal gift of light, and is often referred to by several titles, such as the Goddess of the First Star, Light Goddess, Morningstar, and Goddess of the Sun.

While often pictured as a galactic body of yellow and orange fire by those who observe her from below, amid the planes of Tirr, she typically appears as a woman with fiery wings when she takes a form, or when conversing with other deities. Indeed, this is her primary form when appearing to her mortal (and immortal) worshipers, as well. Of course, she can only do so when it is her night cycle: The time when she appears over the Plane of Souls or the Shadow Plane. Otherwise, one of the planes would go without her light. This cycle is represented as the passage of the sun through the sky by those who observe her from below, but is actually her patrol around the celestial globe and planar prison that contains Tirr; A task that she and her arch-rival Lunar have shared since its creation, in order to prevent any breaches that might occur.

Bearing the ideal of Light, she seeks to bathe the entire world in light, and to carry that light to all that desire it, and sometimes, even to those who do not. She (and her brother, to a minor degree) has an infamous rivalry with her counterpart, Lunar, in which she attempts to disrupt his movements, and those who would attempt to hold up his banner. Lunar does not return her sentiments, however, and largely conducts his own duties without concerning himself with her plots. More than a few bards have dared to sing songs suggesting a one-sided love between the two, but this is often regarded as heresy.

Being a deity with a purpose as universal as that of a celestial body, Helios Majora's philosophies and ideals are encompassing of her followers' daily lives. Whereas most deities call upon their devout worshipers to a purpose that is often in line with very narrow concepts that belong to the domain of their ideals, the Goddess of the Sun's followers are simply instructed to preserve the dominion of light in the world, and to give homage to it.

Often times, this involves daily rituals of sacrifice and festivity, involving feasts of wine and fine food in some of the many temples that dot the surface of Tirr's many planes. In other cases, priests might pray for their deity to end droughts or storms, in order to care for those who stand to be harmed by such phenomenon. Still more orders devote themselves to carrying the light of their deity into the darkness of crypts and forests, ridding the world of creatures that prey on those that live in the light, often to the chagrin of their goddess's eternal rival, Lunar. Sometimes, this requires resisting other groups who have different interests (again, such as the God of the Moon), and the various clergy and orders dedicated to Helios Majora have their numbers and devotion to thank for their might.

While most followers suffer no restrictions outside of what is expected from them by their deity, most devout followers are against the idea of using means to shutter or remove light without some greater necessity. Indeed, most devout followers live their lives by their Goddess's movements through the sky, resigning to darkness at the end of the day, or relying on the smaller star, Helios Minoris to provide a semblance of twilight. The deity, herself, is loathe to provide her clergy and paladins spells like Darkness or similar machinations to remove her gift of light - Often times, she simply will refuse.

Clergy to Helios Majora usually are influenced by the appearance of their deity's celestial form in the sky, to some degree. Often times, they begin the day by acknowledging her presence in the heavens with prayer and meditation, always facing the direction of the sunrise. Furthermore, at the end of the day, they do the same, but this time in the direction of the sunset. Being gleeful during the day is not a requirement, but is common enough.

Temples to Majora are often constructed with openings in the roof, or skylights, so that Majora's light might shine through in brilliance during the day. They also are typically adorned with symbols, both upon cloth and in sculpture, of their deity's likeness, the sun. Temples and clergy alike are typically adorned in warm colors.

Majora has seat as one of the Lesser Thrones of the Pantheon of Tirr. She usually has little to say regarding the discussions of the Pantheon, and sits next to her brother, Minoris. She does, however, occasionally speak-up, especially when Lunar is benefited over herself.

She typically enjoys amicable relations with many deities of the Pantheon, primarily Jubila and Balthazar, as her name is celebrated and the cause of many festivities, and also because many of her paladins seek to strike down the evil denizens of the dark (albeit for different reasons, most of the time).

Bycore often has good relations with Helios Majora, and often barters with her for his followers' sake, in the interest of procuring a safe journey.

As mentioned several times before, Lunar is despised by the Goddess, although the feeling is not mutual, at least insofar as intensity is concerned. Ironically, Lunar dislikes her mildly, but only because she continues to obstruct his duties and wage all but war upon him.