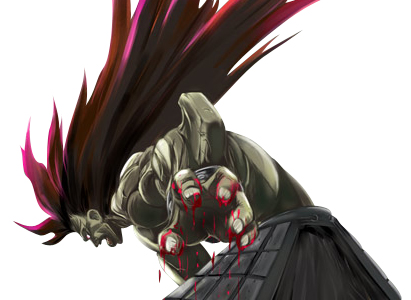 A god of wanton destruction and chaos, Serberus is always eager for battle and a challenge, often leaving a trail of ruin in his wake.

Few names make more hearts shudder in fear than does the name Serberus; His brand is one particularly earned through great levels of carnage and destruction, and a wanton recklessness and bloodlust in battle that would make even the most hardy and experienced of warriors pause to consider their options. Serberus embodies the ideal of Destruction, and is usually also considered a God of Rage and Chaos, especially considering his own temperament and his usual depiction. These same qualities often cause others to refer to him as the "God of Barbarians", given that his qualities embody the reckless power that barbarians endeavor to control. That said, many of the uncivilized races, especially those of the Kin who might still have significant portions of their population involved in barbarism, do not associate with the deity, especially when their own tribes are not overly destructive or evil.

Despite being a deity of unrestrained anger and relentlessness, Serberus surprised all when, at the climax of the War of Deific Sphere, he demanded to join the assault against Varglokirr, choosing his ideal and the chaos of battle above all else. It was even more so surprising, when he demanded to be allowed seat on the newly formed Pantheon, citing his might and challenging any and all to decline him, to which Balthazar, his sworn foe, obliged. Through a long and drawn-out conflict, it was only after Fate intervened that the destruction god was granted one of the Major Thrones of the Pantheon, much to his mutual foe's disgust.

Since this time, Serberus has served as one-half of the balancing of the Major Thrones, providing a sort of dualism in the judgement of the Pantheon. Generally, he is joined with Mephistopheles in many arguments, while being opposed by Balthazar and the Great Mother. In some cases, however, the more militant attitudes of both Balthazar and himself can produce a number of arguments where they agree, albeit begrudgingly. They both also act as the enforcers of the Pantheon when dealing with individual deities who have not been sworn to the oath, such as the Aesir.

Unlike similar deities, such as the Aesirean goddess, Tiamat, Serberus does not care about the domination of foes or displaying his supremacy, at least, not as a goal or philosophy (He does enjoy being victorious and often boasts of being stronger than others), nor does he endeavor purely for the glories of combat, like his fellow Pantheon deity, Gahss. Instead, he seeks the chaos of battle and destruction, itself, and the state of mind of the fury that ensues, believing that to be the natural and greatest state of all living things, and he sees no need to justify his beliefs, as they are innate states of all creatures.

As such, Serberus is a decidedly evil deity, and thus seeks to spread his particular love of ruination and chaos across the land, and is not above the use of terror, hatred, and madness in order to do so. His philosophy is likened to a natural battlefield with no rules, a terrible desire to simply destroy and tear apart all that stands nearby, and all that follows. Because of this, the blood knight or other battle-seeking individual is a carrier of his will, and those who serve to further his desire for dissent and destruction are often considered by the deity in some manner of positive light, although he truly cares for no living being.

For these reasons, those who worship Serberus are often bloody societies or individuals, those who hold little regard for individual life or liberty, and instead are sociopathic in that they attempt to sacrifice such things in the pursuit of greater goals; For societies, this often results in a lawless organization in which the leader rules only through might, and fights off many would-be challengers a day with gory, bloody combat. For the individual, he leads a life where every encounter is likely to end with vicious and chaotic combat.

Clerics who worship Serberus are most often reviled, but respected, warriors who seek out major battles wherever they might appear. This means they often engage in, and are subsequently banned from in some cases, bloodsport, wherever they go. Generally speaking, most law enforcement communities are on the lookout for ritual worship of the God of Destruction, and in a number of places, his worship would be banned were it not for the influence of Silverfell, the center of Pantheon worship, intervening and influencing them from completely banning the worship of any sponsored deities. Those who worship and draw power from Serberus are much more inclined to cavort with lawlessness and reckless behavior.

Only two major temples exist to Serberus, and most that are erected are not likely to persist because of the religion's clearly destructive and generally antithetic principles which keep them from normally coexisting with most modern societies. The two existing temples are the located in Goldengate, among the other great temples, and in Agota, a lawless city which is governed by spite for the civilized world beyond its borders.

Serberus holds a Major Throne in the Pantheon of Tirr, the last of the five major deities to rule over the council. His chaotic nature often disturbs and causes tensions with the other gods, including Mephistopheles, his closest ally in his endeavors to influence the Material Sphere. Despite the numerous arguments that come up, and the occasional violence, Serberus holds his seat purely out of power and a need for balance.

His most noted rival is Balthazar, as the two are polar opposites to one another in terms of philosophy, and both tend to be willing to employ force in order to achieve their own ends, which leads to numerous confrontations between the two gods, usually only able to resolved by Fate or some other powerful interference. He holds similar grudges against Bahamut, for similar reasons.

Tiamat was one of his more vocal proponents, if only because their ideals overlapped in many circumstances, but even with the Dragon Queen, Serberus quarrels. Most often, they would have confronted each other regarding who is the stronger of the two. Macha, however, idolizes Serberus, though not for reasons one might expect: She sees him as another "mad-god", and thus finds his existence pleasing to her, although Serberus himself denies any such affliction.

Gahss finds some of Serberus's qualities to be notable, but for the whole, does not appreciate him, as he finds his relentless and chaotic behavior to be unfit and unappreciative of the full glory of battle.