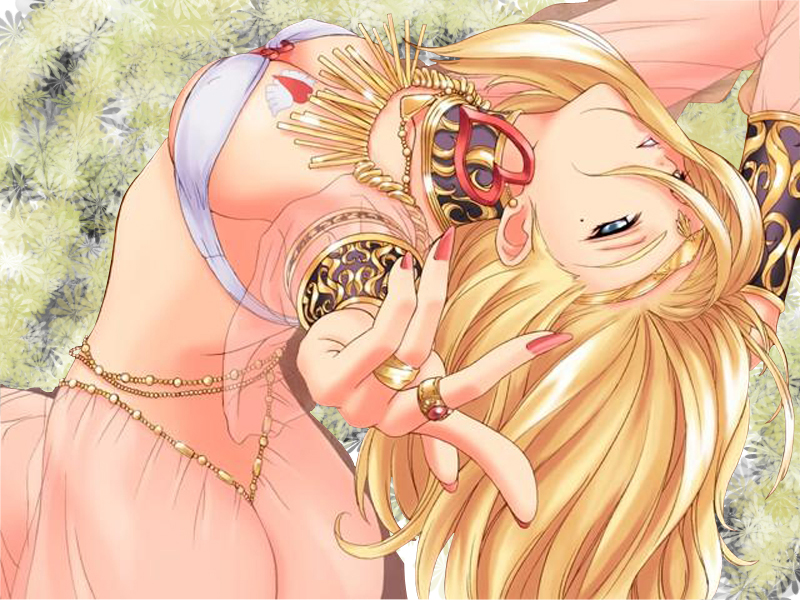 Jubila, the Goddess of Dance and Song, who is praised by revelry and celebration.

In all things exist the desire to express joy, victory, or pride... and all these things exist in the being known as Jubila, especially. The goddess of the Pantheon is the living embodiment of Dance, Song, and Celebration. She is the patron of artists, bards, and dancers, and her hand is seen in nearly every major festival in Tirr; To not include her, after all, is to doom the celebration to ruin, in common lore. Because of this intimate nature with those mortals of the Material Sphere, she is often berated by the more strict among the Pantheon's members, such as Balthazar, for potentially interfering with the world below. Fortunately, she has never once interfered so much as to have violated the Oath, which would surely have disastrous consequences.

As a whimsical goddess, she is often seen as indifferent to the plight of the creatures who walk upon Tirr's surface, and there is some reasoning behind it in that she is usually only concerned with furthering her own ideal's influence in the world. That said, she is a compassionate goddess, and does care for her followers and those in the world in general, knowing that even those who do not dance or sing all that often can still sometimes have the most wonderful voices, or that they might inspire others to revel, which, to her, is just as good as directly worshiping her in song and dance.

She is represented as a humanoid figure, closely resembling that of a human or other fair-skinned, round-eared race, and is nearly always dressed in the garb of an exotic dancer, ever eager to perform. Often times, this form is subject to the applications of artwork by many an artisan and reclusive painter, much to the jealousy of Era, the goddess of beauty, though there is no repercussion for choosing one deity over the other. As such, it is not uncommon to find many statuettes and sculptures of the fair deity, especially when a festivity is concurrently occurring. Small tokens with her visage are often seen to be a symbol of good luck when it comes to dancing or singing, and many performers keep one on their person when they perform.

Bards and Dancers of all kinds believe that it is she who granted them their arts, being a master of incomparable voice and grace, and that matching her own arts is the greatest goal possible. As it is, then, many of these individuals often offer some form of tribute to their deity when they perform, and some who end up pleasing the goddess are met with Jubila's presence, herself. In a number of ways, this is one of the greater blessings that the deity offers, giving their performance a seal of approval which is recognized by all as the highest possible recognition for one of their arts.

The idea of dogma can be summed up into a rather simple sentence, spoken by the goddess, herself: "When the passion comes and swells within your breast, let it free; With vigor, let it free." This has been interpreted in comparatively few ways, and is generally the call to release any and all inhibitions towards the idea of cheer and celebration.

Jubila is a very passive goddess, and generally is "low-maintenance" when it comes to the type of ideals or restrictions she requires of her followers: She simply requires celebration and livelihood. When a hamlet or town gathers together to celebrate the Birth of the World, as so many do, they do so with song and dance, and with Jubila's blessing. When a merry bunch of grizzled war veterans cheer for their victory, and chant and sing tunes of glory, they are joined by the goddess in spirit. The act of revelry, drunken or inspired, is the very blood of the goddess, and to take upon it is to worship her.

Typically, artists of all kinds tend to worship Jubila, as well, as she surely accepts their devotion; They are especially joyful and festive when they've finished their works, and therefore also serve the ideals of the Goddess. These individuals pursue art primarily for it's own sake, and because of that, they find the freedom and joyful reign of the goddess to be beneficial to their pursuit of artwork; Artisans and others who do so for profit are generally less devoted to their art and worship other gods.

Temples to Jubila are uncommon, but not unheard of. When they are found and do exist, they are often wide open areas, arranged around a large, adorned image of the Goddess usually alongside a centerpiece; Often times this is an incense dish, allowing for the heavenly vapors of joy to inspire those in worship. Sometimes, it has been reported that when these vapors are lit, the goddess of dance and celebration joins the festivity, but this is often attributed to certain types of incense being burned.

It is also very likely that town centers, arenas, or festival areas will have many an idol dedicated to Jubila, in order to promise her invitation to bless such ceremonies held there is not forgotten. Clergy who serve Jubila are typically bards or dancers, themselves, but can also simply enjoy the act of choir and humble song.

Settled in one of the many lesser thrones of the Pantheon of Tirr, Jubila sits next to Vault and Mara, and is generally regarded with good spirits by all except the most sinister or hate-mongering of the gods, such as Serberus. This is generally because of her ability to celebrate nearly anything, including both war, which Gahss favors, and Peace, which Mara and the Great Mother support. She seldoms speaks, but when she does, she sings, and almost always favors motions that will end in celebration... which is nearly anything.

Jubila typically finds common ground with other free-spirited deities, such as Bycore and Undine, and often mentions a disdain for others who take things too seriously. She doesn't dislike passion, but complete fixation is another thing.