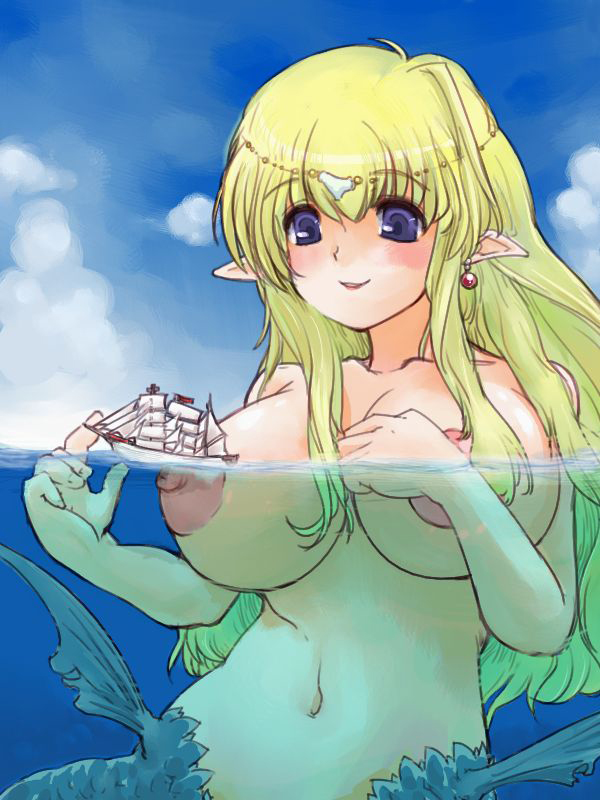 Undine, the Aesirean Goddess of the Oceans, and Patron Deity of the Merfolk. Those who intend to cross the seas pay homage and tribute to her.

Slumbering deep beneath the oceans that separate the continents of Halimeda and Loupe, the one known as Undine governs the oceans and its inhabitants, protected by those who consider her their patron deity, the Merfolk. Her appearance is that of a colossal merfolk, beautiful and friendly, almost always appearing with the trademark finned tail, and always in the ocean. Her stature is one that could put cloud giants to shame, dwarfing even the greatest of constructs. Songs have been sung about the Aesirean Goddess of Water, depicting her as a "Gentle Leviathan of Terrible Power".

She maintains close ties with her chosen people, the Merfolk, who resemble her ideals and appearance, and entrusts her wishes to them when she slumbers in order to conserve what remains of her divinity. That said, she also shares good relations with the Terrapin and Common Catfolk of Tirr; Both races have significant populations that revere the Aesirean Goddess, and she derives a great deal of her strength from the three races' worship.

Undine embodies the nature of Water as her ideal. This has lead her to develop a carefree, soothing personality, naturally taken to the role of a free spirit when compared to other deities. Given the amount to which the races of Tirr rely on the oceans to travel and transport goods, she naturally receives more ideals and worship than most other Aesir, besides perhaps Mana. This allows her to awaken much more commonly from the slumber that befalls all Aesir, and usually in good spirits.

While Undine technically governs all waters of the surface, she does not govern the weather, as that is the domain of Munsa and Somata, respectively, and is closely related to the two of them, especially in regards to seafaring mortals who wish for a safe journey. She is also the most generous and kindest of these three deities, and is the most likely to actively assist mortals who ask for her blessing, often directly. This naturally also makes her one of the most common Aesir to appear to mortal races in Tirr

Followers of Undine are encouraged to respect and worship Undine directly, and are commonly associated with sea-faring trades and professions. Most regularly visit her various temples along the costs, though a lucky few can sometimes find a means to visit the Undersea Temple where Undine resides, herself, besides the Merfolk. While there is no direct call to congregation among followers, the act of gather together to worship the deity is generally held in high regard and with great esteem.

Those who truly commit themselves to the Merfolk Goddess typically endeavor towards serenity, and attempt to become more like their deity in this manner. They attempt to become an entity who benefits others, and gently flows along the current of life without letting the burdens of said life influence them to act rashly or harshly. They do not confuse this ideal to mean that they should never be active or forceful; Indeed, even a gentle stream can suddenly become a torrent. Rather, they believe that one should always be able to retreat back to the stream of serenity at any time. As such, frequent meditation and solemn prayer is incorporated into the lives of the faithful.

This lifestyle often causes followers to become more fluid, personality-wise, and to espouse the greatness of their deity and her benevolence in a myriad of ways, in a passing, second nature. While this may seem like it may lead to zealotry, Undine's followers are not especially persistent, as such types of behavior would be against their deity's will. Rather, perhaps the most common dogma between all followers of the Goddess is a desire to become closer to the nature of their deity; To be closer to the nature of the sea. This encourages a common practice of fishing, love of song and swimming, as well as sailing and diving.

Perhaps one of the few Aesir to enjoy such multitudes of devoted masses, due to her nature, Undine has many temples dedicated to her worship, most of which are erected by priests and Clerics along the shores of the oceans of both continents. Merfolk and Catfolk of the common variety are priests in her service, often, though she also has quite a number of Human and Elven clergy, as well.

Some of the more extravagant temples are located in the Bridge City-State of Fairus, where Undine is commonly revered as a patron deity and many festivals are held in her honor, sometimes attracting the attention of the deity and her entourage when she happens to be awake. Possibly the most important temple is the Undersea Temple, a positively gigantic shrine where the deity slumbers, and Merfolk have built a small holy city around.

Undine is happy to keep relationships with most other deities, but does not especially go out of her way to, given that she appears satisfied with her lot in life; A rarity among the Aesir. She is prone to assisting others whenever she can, with little regard for the potential rules of thumb or possible consequences, as she acts largely on impulse and is compassionate. Era, who enjoys a similar temperament, appreciates Undine and her ideals.

Bahamut finds Undine to be a model of goodness and benevolence for the Aesir, although he commonly chides her for not being more vigilant in the service of her people. While the two deities espouse similar ideals, Undine's more relaxed and good nature is the source of her compassion, whereas Bahamut's derives from a sense of duty. Tiamat despises Undine for the same reasons as she does Bahamut, viewing Undine's coddling of the lesser beings to be a disgrace.

As mentioned earlier, Somata and Munsa share a common relation, being the three primary Aesirean deities associated with weather and the forces that affect travel. While they often differ in their own personal dealings, the three enjoy a mutual bond in this matter.

Jubila finds much kinship with Undine, as well as Bycore, the three being a set of deities whom, prior to the exile of the Aesir, were a group of free-spirited deities who loved song, dance, and festivity, as well as the threes' ideals and natures tending to be similar to one another's.