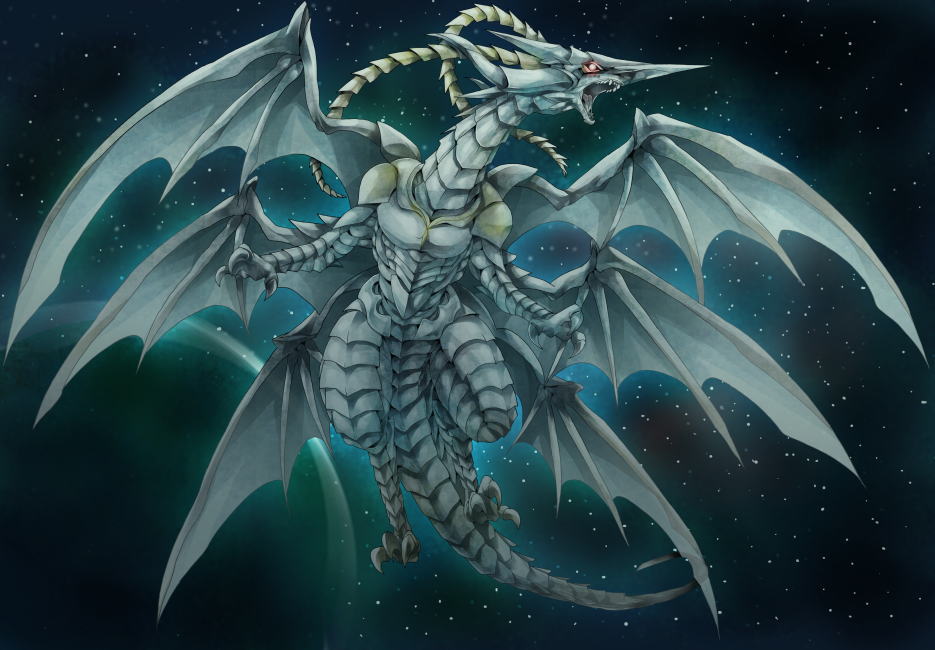 Bahamut, God-King of Dragons, defender of the weak and champion of righteousness. He is depicted as flying to the heavens, ascending to the Astral Plane.

As the God-King of all dragons, Bahamut has gained quite the renown among the mortal races of Tirr, and even commands quite a large amount of respect from the deities of the Pantheon. This is especially true of the native Dragons and the relatively new Dragonkin that populate the material plane, who revere him as their patron deity. This also serves to further his followers, and even those of the dragons who don't follow him, to resent the Pantheon for their past ouster of Bahamut and the rest of the Aesir.

As an Aesir, Bahamut is one of the many deities who were ousted from the Deific Sphere because they were unwilling to bind themselves to the Oath. While Bahamut is not above understanding the reasons behind the incident, as he was also involved in the battles against Varglokirr, he believed that the binding would serve to inhibit the ideals of Magnanimity that he embodies. As such, it was he who restrained Tiamat when she flew into a frenzy at the suggestion of exile, and he, still, who carried her to the surface, without so much as a word to those who banished them both. When other Aesir demanded justice for themselves, and they began to speak of rebelling against the newly formed Pantheon, it was Bahamut who stood between them and the others, demanding that they save their pride, and accept their fates with dignity. Because of this, the deities of the Pantheon, especially those of similar alignment, view Bahamut with deep respect, and some even with regret.

Bahamut was also one of the Aesir who witnessed the fall of Sympatheia, who gave up her life to bring the Light to Tirr, and to fully comprehend the significance of her actions. He mourned her, and honored her sacrifice, dedicating himself to the defense and preservation of the world and peoples she died to save.

He shares a primal relationship with his mate, Tiamat, who is his opposite in every way, and has always opposed his decisions since their exile. Tiamat believed that the Pantheon was exiling the Aesir because they were weak, and further was disappointed when Bahamut took up the Dragonkin as equals to their own spawn: Dragons. It was this incident that separated the two gods, with many battles being fought as Tiamat attempted to destroy the weak of the world, including the Dragonkin. When defeated during their final battle, Bahamut forbade Tiamat from showing herself in his sight, evermore, and then flew to Godsreach, where he rested before he ascended to the sky, escaping to the Astral Plane, where he is said to watch over Tirr from afar.

Bahamut's adherents are noble warriors who seek to defend the weak and downtrodden, taking up the ideal of their god, Magnanimity, as absolute. They are typically versed in martial arts and combat, and prone to leaping into any fray in order to defend against unjust attackers and those who take pleasure in harming defenseless creatures. Bahamut, and so his followers, values life, and will not see any creature harmed purposelessly, and especially without having a chance to defend itself. Furthermore, Bahamut finds that pride is necessary for any creature to be magnanimous; One has to believe in standards for themselves, and strive to surpass them, before standards can be applied to others, and thus, many followers adhere to this very idea, often resulting in highly confident followers.

These natures often result in a high number of followers becoming Paladins, Knights Monks, and Clerics. A significant number of followers in Godsreach also become Dragoons, and revere Bahamut for giving them the means for fighting back the dragons and evil creatures that attack their city-state, often in the name of Tiamat. Most followers of Bahamut tend to travel, periodically, as they find it as a means of reflection on their paths in life, as well as a means to remain down-to-earth and not above helping the common folk they meet in their travels. They also use this as a means to pursue and reach the Platinum Dragon's Temple, located in Godsreach, which holds special respect for pilgrims of the deity.

It is worth noting that Bahamut does not allow or approve of zealotry, and will revoke any blessings granted from a being who rises above his station in such a manner. Bahamut has pride enough to appreciate his own power, and does not let such things cloud his judgment of others; Similarly, he absolutely abhors the same act in mortals.

As an Aesir, the Bahamut has a temple among his faithful masses, which serves as the center of worship and as a means of communing with the sleeping deity, as even in slumber, he is ever-watching. The Platinum Dragon's Temple is located in Godsreach, where he last stayed before he flew off into the heavens, escaping to the Astral Plane. In this temple, many acolytes practice a form of asceticism, eschewing material possessions and the world around them, in order to further hone their bodies and emotions to better serve the ideal of their deity.

Clergy of Bahamut tend to congregate in this temple, though the Platinum Dragon has many followers, worldwide, and many orders and organizations are dedicated to him. While normally a rarity, since the dissent between Pantheon and Aesir worshipers is usually intense, most groups are able to accept that Bahamut is an exception to the rule; He is generally seen as a protector of the weak, in almost all locations and peoples, besides those who follow his antithesis, Tiamat.

Bahamut is among the strongest and most powerful of the Aesir, one of the few deities who have managed to remain as a greater deity despite being ousted from the Deific Sphere, along with Mana, and Tiamat. He is sometimes referred to as the "leader" of the Aesir, but this is not true, as the Aesir do not have any organization, whatsoever, unlike the Pantheon. This is most likely attributed to the fact that most Aesir, besides Tiamat, hold him in high regard and are often swayed by him. Mana, in particular, commonly associates with him when dangerous scenarios rear their heads.

He maintains relations with the Pantheon, and most other Aesirean deities, especially Vok and Mana, the former being another dragon deity who commonly barters with mortals, and the latter being the Goddess of all Arcane Magicks. In particular, he is highly respected by most good deities of the pantheon, especially the Great Mother, who opposed the idea of banishing the Aesir, in the first place. Balthazar respects him, but ultimately believes that his rejection of the Pantheon was a rejection of his own ideals.