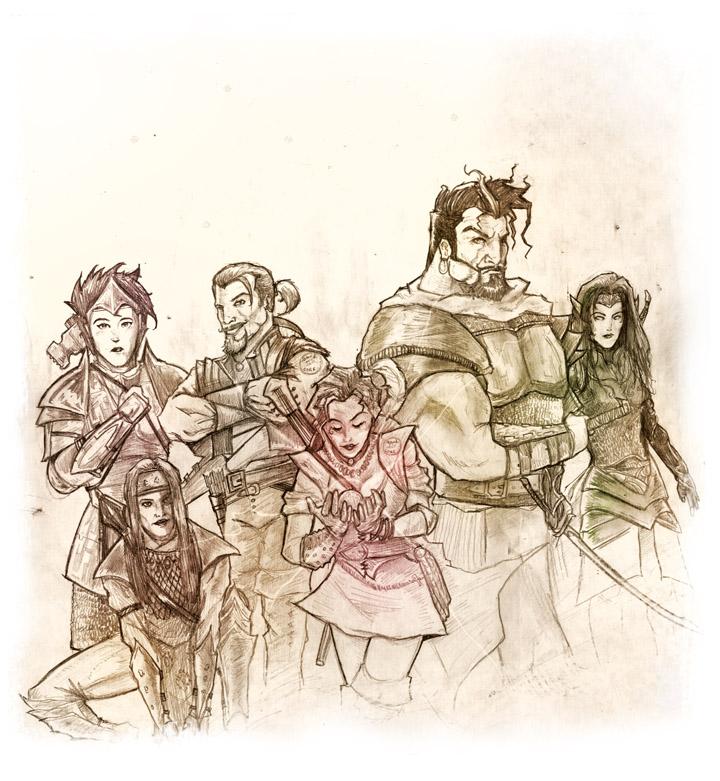 The major races are generally located in their respective lands, though there are always exceptions.

The humans of Tyrus are adaptable and strong-willed. Ramaldan Humans are well-rounded. They defend their homeland from multiple enemies at once, thriving by employing a multitude of skills in battle and strategy. They work well with their allies, the Dwarves and Gnomes, who provide assistance in the fields of crafting and magic, respectively. Humans exists in large number in all of the Ramaldan cities and towns. The Korian Humans are more geared towards physical combat and are slightly less rounded than their Ramaldan counterparts. Humans make up about a third of Kor's entire population.

Rock Gnomes are intelligent and have a natural grasp of magic. They loves to entertain and create things. Natural at alchemy and enchantment, Rock Gnomes aid their allies with the their aptitude for spells and wizardry. The Rock Gnomes of Ramalda aren't usually in battle, but the ones you will find are usually battle mages protected by several armored warriors. Rock Gnomes tend to stick to the smaller cities or rural areas of Ramalda.

Dwarves are a hardy race of fighters and crafters. They are skilled at making weaponry and armor, and Dwarven crafters supply the Ramaldan military with most of its supplies. Dwarves get along well with Gnomes, who share their shortness of height. The two races compliment each other and together the Dwarves fill in most of the physical weaknesses that Gnomes have. Dwarves live mostly in the cities of Ramalda, or up in the Id Mountains.

Orcs are are brutish and war-loving race. They have established many of Kor's traditions of warfare and battle, often serving as the nation's greatest warriors. Orcs are not known for their civility, but are not savages either. Korian Humans are compatible with Orcs in many ways, and as such Half-Orcs are fairly common in Kor as well. Orcs can be found anywhere in Kor, with no true preference for any specific setting.

The High Elves make up most of Eriv's population, almost two thirds. Despite this they are rarely a part of the Erivish main military. Instead they are scholars, diplomats, sages, and wizards. High Elves prefer to make their own infantry through means of constructs and conjuration. They get along just fine with the other elves of Eriv, and can be found anywhere on the small continent.

Wood Elves are the front line soldiers in Eriv's small army. They are nimble and physically strong, making good scouts and fast warriors. They are not strangers to magic, though, and can use it fairly well too. Wood Elves live in small towns and rural areas in Eriv.

Gray Elves are arrogant and self-righteous. They strive to be the most intelligent of all the Erivish Elves. Gray Elves almost solely work with magic. Even the few warriors they have usually dabble in magic. While they are arrogant and full of themselves, they do not necessarily hate the other elves or outsiders, even. Gray Elves usually live in small towns nestled into or near the mountains.

Dark Elves are cruel and spiteful. The Dark Elves of Lokk are a conquering breed, they strive to gain more land. The Dark Elves hate their cousins, the Eriv elves. They are a war born race, skilled in magic and in combat. No one is quite sure why they have suddenly invaded Jessiah, but they're gaining land in the eastern Elder Isles.

Minor races can be found in almost any city, though there are considerably less of them than the major races. Not all minor races are compatible with certain lands, and some aren't allowed at all. As always, there are exceptions to this rule. Lokk is not a friendly place for non-Dark Elves to be, and as such there are almost no other races active on that continent.

Half-Orcs are the child of an Orc and Human couple. They take to their Orcish parent more often than they take to their human parent. Aside from appearance, Half-Orcs behave much like Orcs do, though they have a little more reasoning skills. A child of a Half-Orc will always result in a Half-Orc, regardless of whether or not the other parent is Human or Orc.

Half-Elves are mix of a human parent and an elven parent and are often outcast from their elven family. The oucast usually takes to the customs and traits of the society they live in, growing more like that racial heritage than the other. They are allowed to live in Eriv, but are generally shunned by those of the upper class. Wood Elves and High Elves are less prone to shunning Half-Elves, however. Half-Elves in Ramalda are allowed, as Eriv is a neutral nation. In Kor, however, elves are not allowed. Period. If a Half-Elf, Elf, or friend of an Elf is found, they are executed. A child of a Half-Elf will always result in a Half-Elf, regardless of whether or not the other parent is Human or Elf.

Wild Elves are more barbaric that their cousins from Eriv and are better trained in close-combat. They're natural hunters and trackers. While not as arrogant as some of the other Elves, Wild Elves take great pride in their tradition, and most of them never adopt a civilized way of life. The Wild Elves hail from the western Elder Isles.

Planetouched humans occur in both Korian and Ramaldan humans. Every once and a while a human will be born with strange features, usually outcasting them from their birth family. These people have outsider blood in their veins, and it just may not have shown itself in their family tree before.

Halflings are carefree and neutral to almost all races. They are generally accepted everywhere and are not known to cause much real trouble. They are naturally skilled at sneaking due to their small size. They get along especially well with Half-Elves and Gnomes. Halflings hail from the foothills of Sagea and the plains north of the Id Mountains.

Forest Gnomes are like their Ramaldan cousins, but are better suited for physical activity. They love the forest, and most of them never migrate into normal society. Forest Gnomes are native to the Elder Isles.

Other races may be introduced as minor races at the DM's discretion. Keep in mind that Elves are not allowed in Kor, and no significant population of a non-Elf race have taken up permanent resident in Eriv. Also, non-Dark Elves are not permitted to live within the political borders of the Lokken Empire unless they are either slaves or are willing to assist the Dark Elves in their goals.