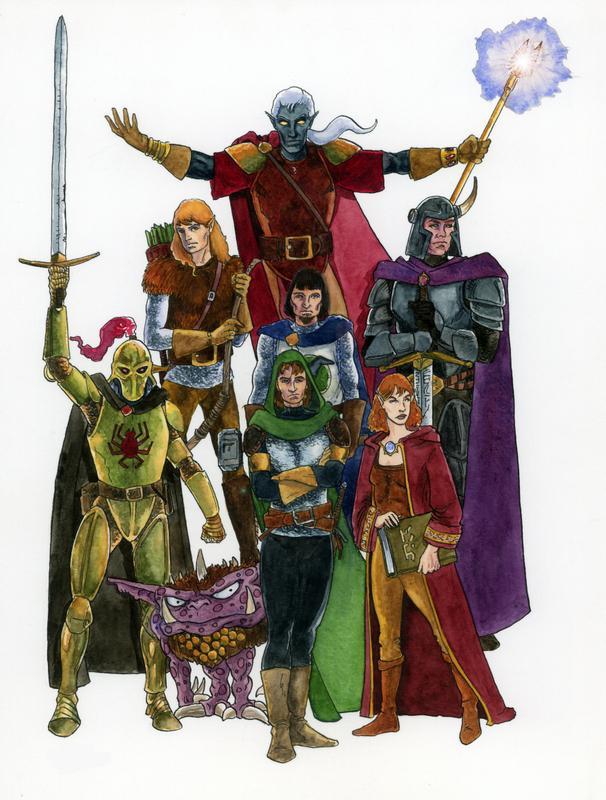 Please choose your classes while trying to adhere to the guidelines for region-specific classes. You do not have to choose your class from this list, ask your DM if you have an idea for another class to use.

These classes are commonly found across Tyrus and are located in almost every region.

Barbarians live in the rural parts of countries, hunting and gathering for food. Many strong barbarian warriors are enlisted in their land's military. You won't usually find a barbarian in a city unless there is a specific reason for him being there. The exception to this is Kor, where barbarians live anywhere. The general customs and traditions of a barbarian are very similar to the Kor lifestyle.

You can find a cleric anywhere. Where there is religion, there are clerics worshipping a deity. Clerics can be found in large amounts in large cities where multiple religious groups are housed in the same city.

In the World of Tyrus campaign setting a cleric may choose to pay tribute to two or more deities. Instead of choosing two domains from his chosen deity, a cleric can choose one domain from two of his deities. The different deities may have conflicting dogmas, but the cleric must primarily worship only one, paying tribute to the other deities on a lesser scale.

Like barbarians, druids are found outside of towns. Even more so than barbarians, these nature loving people are usually found away from consistent human contact. They live off of nature, and in turn, protect it until the day they die.

Fighters are complete and total warriors. They are found in every culture, though there a a lot less of them in Eriv. They are adaptable to many forms of fighting, and as such are one of the most common classes.

Knights are warriors that live by a code. They fight for their values and they fight with honor, even if the enemy does not. A Knight defends his allies with his life, seeing it to be his duty.

Rangers share an affinity for nature with the druid and barbarian, but do not live as bare a lifestyle. They come to live in cities and towns as often as they live in the wilderness. Rangers usually live in or near the habitat of their favored enemy, the type of creature that they hunt most of their lives. Rangers serve as guides to non-Rangers in terrain that may be unknown to others. They also make great scouts in the military.

As long as there is money and possessions, there will be rogues. Rogues can be found in any city, but the most skilled of rogues are never found. In fact, the best rogues are most likely never heard of. Only their deeds are known to the public. Rogues can be solitary thieves, military scouts, informants, mercenaries, and even agents sent by governments to infiltrate enemy nations.

Through tedious study of magic wizards are able to cast a multitude of amazing spells. Because of this power, many are drawn to the path of a wizard. You can find wizards anywhere. From a scholar's guild in a capital city, to a tribe of nomadic Gnolls. With careful study, many races can become a wizard.

Many cultures take great pride in entertainment, and because of this they have bards. Lands like Kor and Lokk very rarely have bards, but Ramalda and Eriv have many of them. Bards employ music, song, and magic to bring about entertainment for many people. They aren't to bad in battle, either.

Every major religion has people completely dedicated to their deity. They go above clerics. These are the high priests. These are the leaders of the churches, and the role models of their fellow worshippers.

A marksman is a master of ranged combat. They make great assassins or hunters. Most marksmen spend their lives as mercenaries or hunters, making a living off of their accuracy with ranged weapons.

There are no form of firearms in Tyrus. Any feature of the marksman that strictly applies to firearms is automatically applied to crossbows as well.

Everyone has fists, and there a select few who have honed this fact into a tried and true weapon. Martial artists are found in most cultures, though true fighters that have earned the right to be called an artist are not as common as your average brawler.

Not everyone has magic powers or physical ability, so some choose to make money. Merchants amass small fortunes by establishing some form of business. They use their wealth to purchase top of the line equipment so they can be of use in battle.

Monks have sworn their live to a deity, and they fight to uphold their religions morals. Through careful training and practice they have sculpted their body into a fighting machine.

You may also use this variant monk as your class, instead of the SRD one.

Ninjas are stealthy assassins that kill from the shadows. They use a mixture of stealth, combat techniques, mystical powers, and information gathering to effectively destroy their enemies.

Devoted to good in all its aspects, paladins strive to wipe evil from the land. Paladins are a common route of live in Ramalda and Eriv, but are unheard of in Kor and Lokk. The values of a paladin do not mix with those nations.

Barbaric cultures worship the spirits of the earth. Those who they seek help from with this worship, are shamans. The shamans are the wizards and clerics of savage tribes. Civilized people have been known to take up shamanism sometimes, more commonly in Kor, than in anywhere else.

Those born with a natural ability towards magic often become sorcerers. Unlike their wizard companions, sorcerers do not need to study. No, they know magic from their heart, their soul. It is within them that they draw their power. While they may not have as many options as a wizard, they make up for it and then some. Sorcerers can be found in almost any culture.

Hidden deep within nature, or within the heart of civilization, tucked away behind humble edifices, monks train themselves and others in the martial art, and constantly seek self-improvement and understanding of the ways that they follow. Some of these adepts choose another path to follow, and train themselves furiously in ranged combat with the bow and arrow.

These advanced classes are available to experienced adventurers in Tyrus.