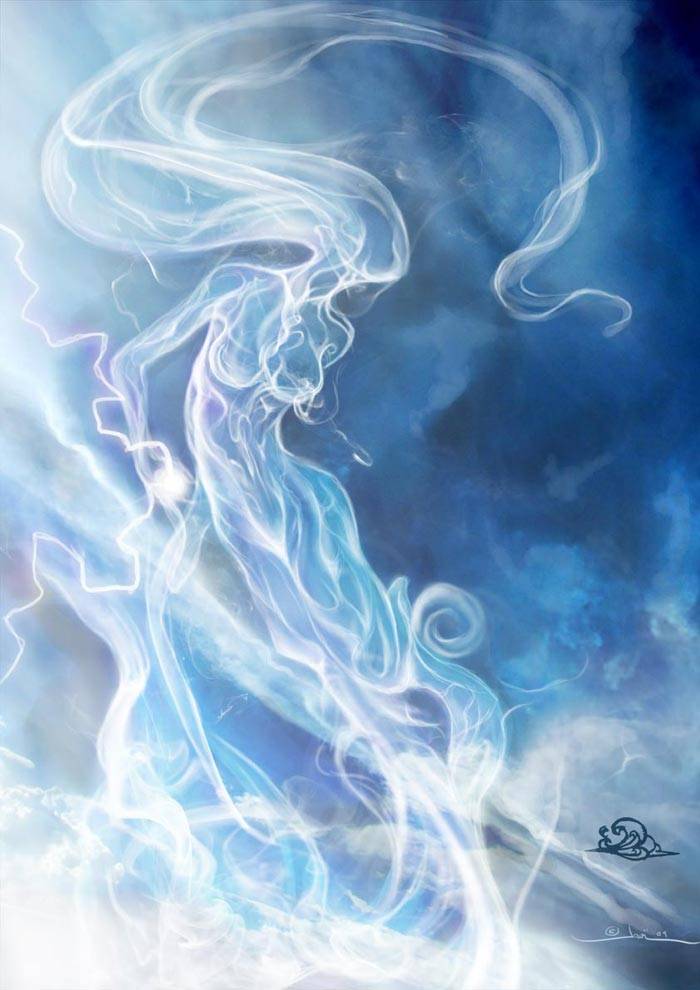 The mistress of rain and storm, Munsa is the goddess of trials, and brews the storms with which to test the mortals of the world. Those who surpass her expectations are rewarded.

The world of Tirr has a great many different cultures and creatures upon its back, of all shape, size, and custom. Few things in this world are universal, but within the material plane, somethings are at least a constant. For example, most of those cultures, especially those of men, elf, and kin, rain, and the storms that bring them, are a must-have, and thus Munsa's name is spoken with esteem and respect... and possibly, with a bit of fear.

The Goddess of Rain and Storms is known to be a being of high standards, and true to her ideal of Trial, she seeks to put many of those of the world below to the test. When the world's various intelligent races began to take shape and speak with one another, Tiamat was already advocating their complete subjugation, or worse, their destruction. Though Bahamut ultimately stayed her hand and protected the mortal creatures, Munsa pondered the question seriously. Her answer, however, came swift: She stole the command of the Storms and Rains from her brother-god, Somata, resulting in a ever-worsening relationship and many fierce battles which nearly saw the entire land sunken or wind-blasted. It was not until Undine threatened both gods with refusing to supply the weather with her waters that the fighting stopped, and despite Somata's protests, ultimately was awarded the right to guide storms and rains across the world.

Munsa is, much like her counterpart, revered and disliked depending one which part of the world one might utter her name in. Some parts of the world see flooding and other disasters due to her storms, while others see drought when her attention is turned elsewhere. Yet more see bounty and flourish due to the life-giving rains that she sends to them. Because of this, she is a deity who is not necessarily viewed as good or evil, but more as a force of nature, much like Somata. The only reliable interaction she has with others is that her ideal makes her highly like to test mortals who contact or summon her, and thereafter reward them if she deems them worthy.

When she chooses to materialize, she often chooses the form of a rain-wrapped, titanic Air Elemental, often with no distinguishable features other than a smooth, lithe form. She has been known to take other forms, such as a stormcloud or as a human female, but these are rare in literature or folk-lore, while the primary form appears to be as stated above.

As an Aesir, Munsa sometimes interacts with mortals somewhat more personally or often than the Pantheonic deities, and is not above establishing herself in a region in which the people have sufficiently pleased her and met her challenges. Embodying the ideal of Trial, she often finds fit to test those who might seek to follow her, or to gain her blessing.

As such, she introduced and reaffirms the act of trials and challenges to mortals of the realm, and advocates seeking the worth or merit in most ideas of importance, and as such is a firm supporter of scholars and truth-seekers. Because of this, when storms visit a populated region, she is often seen as a boon to those currently attempting to study, and truly enough, as a deterrent to those who would rather daydream outside in the sun. Because of this, she espouses preparation, deduction, and vigilance in most things, and ultimately, stern repercussions for those who cannot meet the challenges proposed to them.

Furthermore, while she does not like the actions of her brother, Somata, when he attempts to steal and manipulate her storms, she does not advocate the pursuit of his followers, as he does, her own. She sees those who attempt to disrupt her storms or her followers as a trial of her own, and seeks to overcome her brother in this manner, in accordance with her ideal.

Temples to Munsa are common in major agricultural cities and settlements, but are uncommon elsewhere. Shrines are usually found dedicated to her anywhere that rains are beneficial, such as rural farms or in areas where drought is common. Most port cities and their populaces tend to frown upon the inclusion of shrines or temples to Munsa, as the common thought is that such a dedication would be seen as welcoming the goddess to come and test them, which would be disastrous for sea-faring vessels.

Clerics and Paladins pledged to her cause are typically known to be glory-seekers, and can be found among many adventuring parties and secular orders, as well as in organizations devoted to the Goddess, specifically. They often seek higher challenges in order to surmount them, and present their feats to their goddess in order to earn her blessings. The truly devout, however, see the blessings as secondary to the act of overcoming adversity, however.

Munsa's most notable relationship is the one she shares with her brother-god, Somata; Ever since she seized the power of storms and rains from him during the Age of Myths, the latter has constantly been attempting to unseat and provoke her, sending wave after wave of followers and winds in her direction. While she does not necessarily like or dislike her brother, she does not approve of his actions towards her, nor does she rise to them.

Among the Aesir, she is regarded highly by Undine due to her willingness to compromise in their original dispute, but does not necessarily approve of her habit of randomly putting her challenges upon unsuspecting or unprepared mortals, especially those considered within her care. It is not unusual for her to confront Munsa over a ship that she is putting in danger upon the open sea.

She often sees kindred in Tirros, if only because he represents the sovereignty that she claims in regards to her ideal and it was his name that she spoke in defense of her claim. Though he did not weigh on the matter, personally, she realized a profound respect for his own ideology, from then on.

The two deities of the suns, Helios Majora and Minoris both dislike her to some degree, due to the fact that she has more than a few times literally rained on their parades, but they still like her better than Lunar.