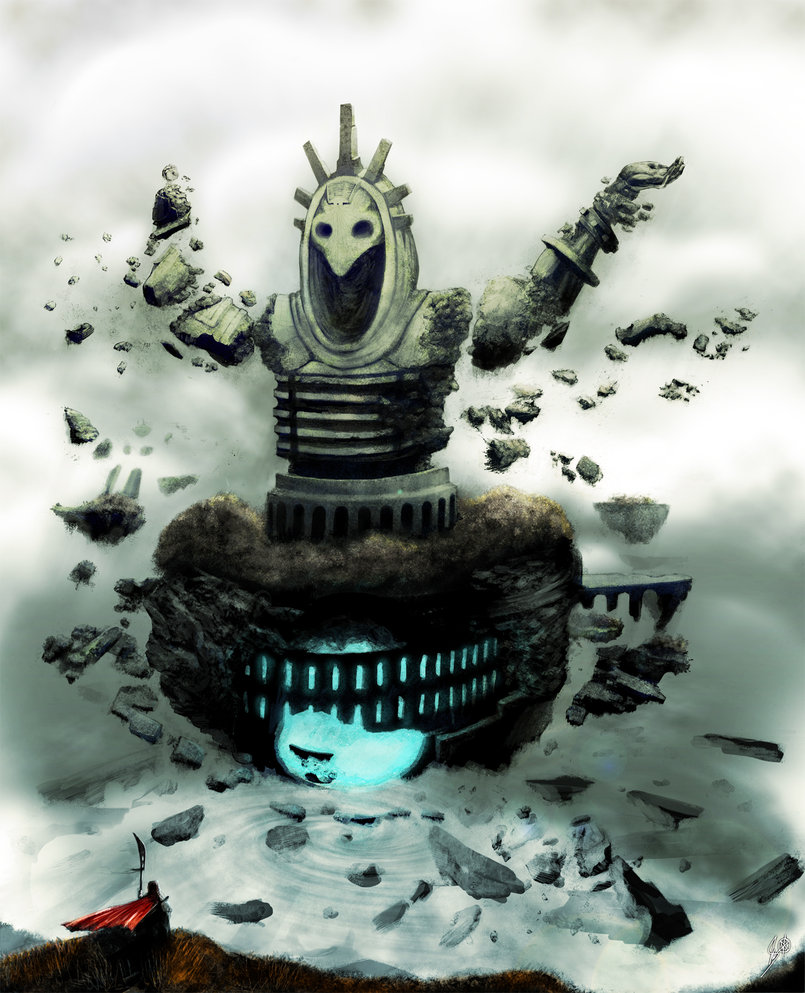 The who governs the four winds, Somata is a whimsical and unpredictable god, often being cursed and praised in the same breath. He presents himself a colossus, ever changing amid a cyclone.

The prince of the four winds, as he is called, Somata is one of the more fundamental or elemental of the Aesirean gods of Tirr, governing over the domain of the air and skies, and providing the winds that spread across the earth. Because of this nature, he is a god whose name is received differently from region to region. Whereas sailors may be more inclined to pray to Undine's benevolence for safety on the seas, they do respect the God of Wind, as it is by his efforts that they might make sail in the first place. While Solean citizens may find him in disfavor, along with his sister-god Munsa, due to the sandstorms and cyclones they experience, Tirasite farmers depend on his winds to run their mills, and thus praise him when the gusts come about.

If it were not already clear, Somata embodies the elemental ideal of Wind, and therefore is primarily concerned with, and his personality is reflected, in the motions of the wind. One of the most common symbols used to depict his influence in literature and legends is the presence of some small object, such as a leaf or feather, floating on the currents of the wind, dancing about in the skies. Just as it might sway gently towards the earth one moment, so to might it suddenly and violently swirl upwards towards the sky. He is largely considered to be whimsical and unpredictable, and rarely cares to become involved in any of the major conflicts that the other Aesir might become embroiled in.

One of the most prevalent legends about his character is his desire to control all the skies and the weather, and his jealousy towards his sister, Munsa for taking control of some portions of the latter. During the Age of Myths, Somata and Munsa fought over possession of the rains and storms, the latter demanding them for her ideal and the former doing the same. Violent storms ravaged the land as the two gods battled over the subject many times, until Undine saw fit to stop them. Threatening that she would not allow the oceans to supply either of their storms with moisture if they continued, the two reluctantly complied, only to see Munsa gain control of the contested domains. In spite of this, every now and then, Somata would use his winds to seize one of his sister's storms, and blow it awry.

Somata almost always appears, when he chooses to materialize, as a colossus of indiscernible anatomy, with portions of his body shifting about and rearranging in a cyclone, and limbs usually not completely connected to the core of his body. Scholars often state that this might be just a facade, as the prince of the winds may not actually have a physical body, but uses this debris as an interface with the material world.

Somata, like a number of Aesirean deities, is not very prone to sharing his ideologies with others, especially those of the mortal distinction. He does, however, often reward those who entertain or please him, especially when it comes to hampering his sister, Munsa.

Typically, those who associate with the deity often try to find some means of establishing core tenets for the mysterious and whimsical god, often translating his own personality and actions to their best guesses as to what his dogma might be. In most cases, it is safe to assume that he does indeed smile upon disrupting the rains or storms that his sister-god causes, and therefore doing so is often a task of high priority, especially given the assistance to society that it might generate. Many also interpret making the most of his blessings in the four winds, by utilizing them in machinery, such as mills, or in personal use, such as spells that manipulate the wind or generate it.

Ultimately, his desire is one of whimsy, and therefore is hardly ever static, except in regards to his eternal rivalry with his sister. That said, he does have an appreciation for wind instruments and the fine music produced by them, and his favor can be earned by those who play songs to him with these items. He also has a noticeable interest in watching the unwinged take flight, however they might do so, as it means they yearn to enter the domain of the sky.

Temples to Somata are rare, but known, while shrines are often far more common. Given his importance and prevalence in the world, many different cultures have different views on his actions and nature, but generally pay homage and respect to the god in order to maximize their benefit. In most storm-prone regions, temples to the wind-god are erected, hoping that by worship, they can have him provide relief, and to their benefit, he does often provide clergy with the means to stem such storms.

Those who follow the god of winds, such as Clerics and Paladins, are often encouraged to utilize the gifts bestowed upon them by their chosen deity, in service against the forces of his sister. Other uses of the power and most choices are generally left up to the individual, however, and so many of them become wandering vagabonds, only knowing their brothers and sisters by uniform and signs taught within their service.

Clearly, the most notable relationship that Somata is involved in is the rivalry with his sister-god, Munsa, over the control of the storms and rains in the world of Tirr. The rivalry has existed since the Age of Myths and does not look to be ending anytime soon, even with some pushing from Bahamut, who intervenes to keep the peace.

He is aligned with Bycore on most matters, as the two share multiple domains and often have amicable relations. They also have similar personality types, allowing them to get along. By extension, most of their followers also find themselves as favorable allies and usually do not hesitate to assist each other.

He admires Jubila, and while she does not return his admiration, she makes a point not to remand him for it. Her followers are often encouraged to play songs and dance for him, though despite his requests, she, herself, never dedicates a dance to him. Their relationship is one of desire and rejection, but is still rather friendly, all things considered.