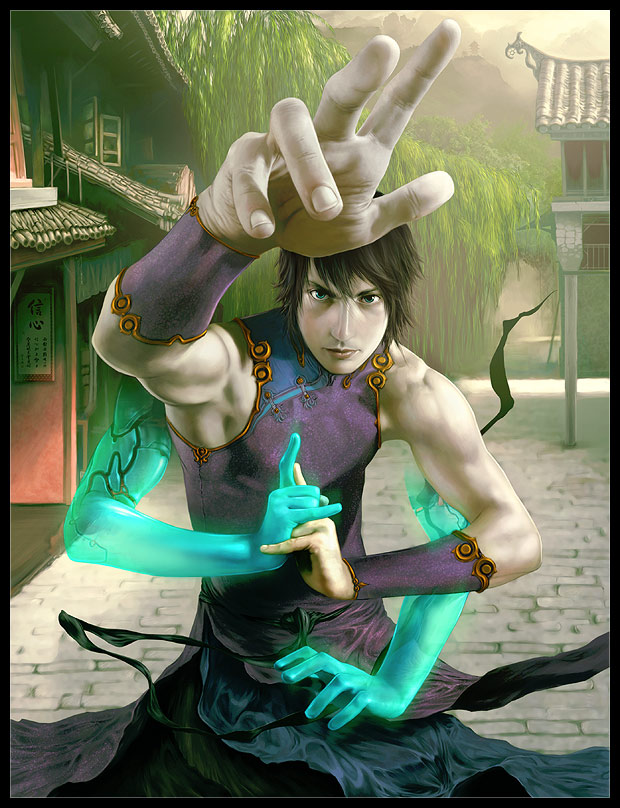 An enlightened fist strikes with unerring accuracy, using astral copies of himself projected onto the material plane and attached to him by astral cords. These projections serve as vessels for his physical form, allowing the enlightened fist to move between them with instantaneous speeds in order to quickly traverse obstacles, navigate battlefields and outwit foes through superior mobility.

Monks who dabble in the mystical arts of Theurgical Enlightenment meditate extensively. Having mastered the physical, they freely research the metaphysical and have found a way to use their inner power to traverse the planes themselves. Enlightened fists are rare even amongst monks, but races and civilizations that lack the proper cultural backgrounds for a monk order to exist almost never pursue this path. Despite this, most enlightened fists have a dual background split between the disciplines of martial arts and the divine.

All of the following are class features of the Enlightened Fist.

An astral clone has no weight and cannot interact with the enlightened fist's environment on a physical level, meaning that it cannot attack or be attacked in any way. An astral clone has a fly speed equal to the enlightened fist's base land speed, and can pass through any solid object and even through force effects like a wall of force unhindered. When entering an area that bars interdimensional travel such as a dimensional lock spell, any astral clone immediately winks out.

Flowing Water Defense (Su): An enlightened fist's defense is focused both inside and out. His astral clones allow him to both flow like water out of the path of an attack, or predict attacks that he normally cannot guard against. An enlightened fist cannot be flanked except by an invisible attacker or one that cannot otherwise be perceived by his various modes of sight. For every astral clone currently inside his body (i.e. not currently projected), the enlightened fist gains a cumulative +1 dodge bonus to AC and Reflex saves and a +2 competence bonus to Bluff checks for the purpose of making feints.

At 2nd level, the enlightened fist gains the ability to selectively alter the perception of time within his astral bubble, as well as to exert limited control on how well the area of his influence is barred from interplanar travel. As a swift action, he may bestow upon any creature other than him within his astral bubble a haste or dimensional anchor effect at will. These effects last a number of rounds equal to the enlightened fist's class level, or until the recipient exits the astral bubble.

Astral Projection (Sp): An 8th level enlightened fist can use astral projection, as per the spell, at will with a casting time of 10 minutes. When an enlightened fist's astral cord is destroyed, instead of dying outright he may immediately reconstruct its cord and return to his body, losing one level in the process. His experience total will be the minimum required for his reduced character level. Neither the lost level nor the experience can be restored in any way.

Astral Dominion (Ex): At 10th level, the enlightened fist can exercise even more control over the astral plane when he is on it. He can navigate it without problem, as if there were landmarks even though there are none, therefore never losing sense of direction. Within a range of 10 feet per enlightened fist level, he may control the direction of gravity completely (including for others). He may pick one direction for his entire field of influence, or he may do such things as change the gravity to attract and repel everything within range. An enlightened fist gets a bonus equal to his class level to any Wisdom check made to influence subjective directional gravity on the astral plane. Success means that the area he controls becomes objective directional gravity to any creature other than him.

Also, once per day, a 10th level enlightened fist may attempt to sever an astral traveler's astral cord. At a successful Concentration check against a DC of 10 + the target's HD and/or class levels + the target's Charisma modifier, followed by a successful unarmed touch attack, the cord is severed, meaning the death of the target.