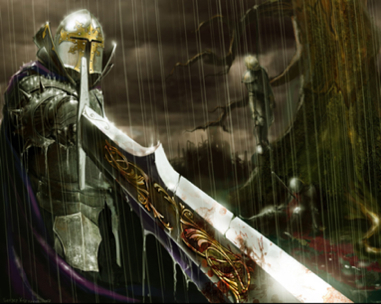 An Imperial Knight takes vengeance for his fallen comrades.

"Do you hear me you big lizard? You unhand that young man this instant!"

Knights are more than a social position, in fact many knights don't have any social standing at all. These knight errants uphold the values of honor, and make a name for themselves adventuring.

A Knight has the potential to dish out tremendous damage to a single opponent, and it is tempting to think of them as monster killers. However, it is best to realize in advance that the Knight does not often realize their tremendous damage output. The threat of the Knight's Designate Opponent ability is just that – a threat. A Knight excels at defensive tasks, and attacking a Knight is often one of the least effective options an opponent might exercise.

So by making it be a logical combat action for your opponents to attack your party's defensive expert, you've really contributed a lot to the party. A Knight can take a lot of the heat off the rest of the party. So don't get frustrated if enemies constantly interrupt your Designate Opponent action – that's the whole point. A Knight's role is to protect others, and the best way you can do that is to provide a legitimate threat to your opponents.

Iconic Knight: In examples, we will always use the Lady Vayn, the Iconic Goblin Knight.

Some Base Classes are Short

Some characters can go on forever within the same milieu. A wizard can continue mastering more and more powerful magics, poring over strange and cryptic books and learning the arcane secrets of the universe without end and still be basically the same person he was when he was a bumbling apprentice whose spells dazzled and delayed onrushing orcs to buy his compatriots some time. A Monk can master more and more impressive Kung Fu indefinitely off into Epic level and still be the same unruly child from the Shaolin monastery. But some characters really can't do that. By the time a Knight hits 10th level, he's already probably riding around on a winged steed and wielding a sword made out of fire, and let's be honest – he's barely recognizable as the ogre challenging lancer from the beginning of the campaign. And that's fine, but it means that writing levels of Knight past that point is an exercise in futility. We can't really predict what your Knight will be doing at 10th level so it would be folly to pretend that there was a "normal" line of advancement for a Knight after that point. Characters need to get level appropriate abilities from 11th level on, but the D&D gameworld does not actually have any 13th level Knights in it. It has Death Knights, and Dragon Riders, and Knights of the Chalice, and Brazen Serpent Knights, and a whole bunch of other things that have Knight levels and are CR 13+, but every one of them has a Prestige Class. That's no accident, by the time you get to that point in your character's life, the direction your character is going to take should be fairly clear, and you will take a Prestige Class. That's fine, and for the short classes we encourage that sort of behavior.

Alignment: Many Knights are Lawful. But not all of them. You have to maintain your code of conduct, but plenty of Chaotic creatures can do that too.

Races: Knights require a fairly social background to receive their training. After all, a solitary creature generally has little use for honor. As such, while Knights often spend tremendous amounts of time far from civilization, they are almost exclusively recruited from the ranks of races that are highly urban in nature.

All of the following are class features of the Knight.

Designate Opponent (Ex): As a Swift Action, a Knight may mark an opponent as their primary foe. This foe must be within medium range and be able to hear the Knight's challenge. If the target creature inflicts any damage on the Knight before the Knight's next turn, the attempt fails. Otherwise, any attacks the Knight uses against the opponent during her next turn inflict an extra d6 of damage for each Knight level. This effect ends at the end of her next turn, or when she has struck her opponent a number of times equal to the number of attacks normally allotted her by her Base Attack Bonus.

Code of Conduct: A Knight must fight with honor even when her opponents do not. Indeed, a Knight subscribes to honor to a degree far more than that which is strictly considered necessary by other honorable characters. Actions which even hint at the appearance of impropriety are anathema to the Knight:

A Knight who fails to abide by her code of conduct loses the ability to use any of her Knightly abilities which require actions until she atones. (See Fighting with Honor for more about codes of honor in D&D.)

Damage Reduction (Ex): A Knight trains to suffer the unbearable with chivalry and grace. At 2nd level, she gains Damage Reduction of X/-, where X is half her Knight level, rounded down.

Speak to Animals (Ex): A Knight can make herself understood by beasts. Her steed always seems to be able to catch the thrust of anything she says. A 3rd level Knight gains a bonus to any of her Ride and Handle Animal checks equal to half her Knight Level. In addition, there is no limit to how many tricks she can teach a creature, and her Handle Animal checks are not penalized for attempting to get a creature to perform a trick it does not know.

Knightly Spirit (Ex): As a Move Equivalent Action, a 4th level Knight may restore any amount of attribute damage or drain that she has suffered.

Command: A Knight gains Command as a bonus feat at level 5.

Defend Others (Ex): A 6th level Knight may use her own body to defend others. Any ally adjacent to the Knight gains Evasion, though she does not.

Quick Recovery (Ex): If a 6th level Knight is stunned or dazed during her turn, that condition ends at the end of that turn.

Bastion of Defense (Ex): A 7th level Knight can defend others with great facility. All adjacent allies except the Knight gain a +2 Dodge bonus to their Armor Class and Reflex Saves.

Draw Fire (Ex): A 7th level Knight can exploit the weaknesses of unintelligent opponents. With a Swift Action, she may pique the interest of any mindless opponent within medium range. That creature must make a Willpower Save (DC 10 + ½ Hit Dice + Constitution Modifier) or spend all of its actions moving towards or attacking the Knight. This effect ends after a number of rounds equal to the Knight's class level.

Mettle (Ex): An 8th level Knight who succeeds at a Fortitude Partial or Willpower Partial save takes no effect as if she had immunity.

Sacrifice (Ex): As an immediate action, a 9th level Knight may make herself the target of an attack or targeted effect that targets any creature within her reach.

Knightly Order: What is a powerful Knight without a descriptive adjective? Upon reaching 10th level, a Knight must join or found a Knightly order. From this point on, she may ignore one of the prerequisites for joining a Knightly Order prestige class. In addition, becoming a member of an order has special meaning for a 10th level Knight, and she gains an ability related to the order she joins. Some sample orders are listed below: