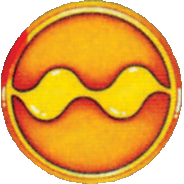 This medallion appears as a golden disc about six inches in diameter, with chaotic designs engraved on its surface.

While it is on your person, you can activate the quake medallion by using an action to thrust a melee weapon into the ground at your feet and speak the command word. In doing so, you simultaneously cast both the spell spell (cast an 8th-level spell, DC 18) and the earthquake spell (DC 18), centered on the point where you thrust your weapon into the ground. Both effects last for 1 minute without requiring concentration, and you cannot choose to end these spells prematurely.

Once you cast this spell, the medallion normally cannot be activated again until the next dawn. A creature can touch the medallion and use its action to expend a 8th-level spell slot, which will replenish the medallion's charge early.