The Innocent Age represents the time -- often described in idyllic terms -- of the time when all of Patronage was under the Patrons' dominion. Each noble and base race understood their position in the world. They had purpose. They had pleasure. They had peace. This all came to and end after a scant two centuries with the appearance of the first wild race -- humans. The Innocent Age is followed by the Lost Age. 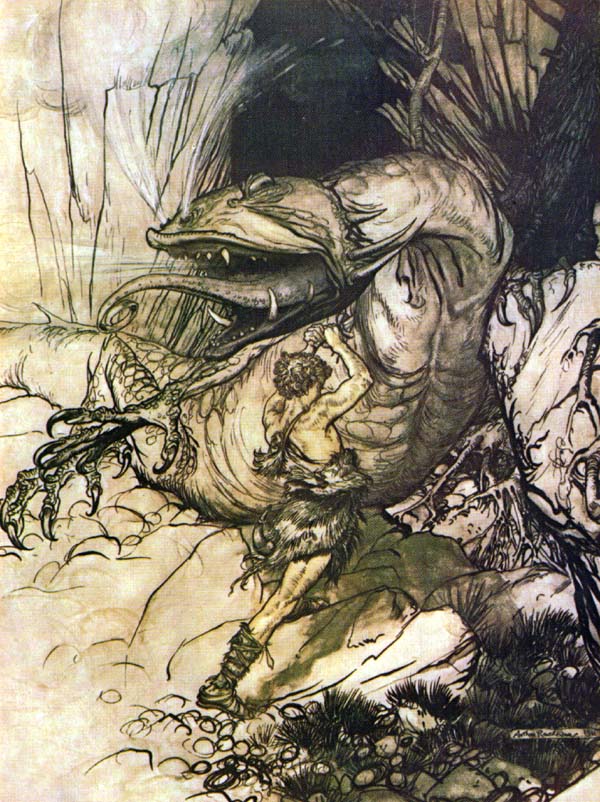 Nebu slays a Dragon, bringing an end to the Innocent Age.

Little is known of the first two centuries of Patronage, except (according to the Patrons), it was an idyllic time, fresh with possibilities. The Patrons were forming their subjects and establishing their benevolent orders. Each Realm operated with clockwork precision and every individual knew his or her place in the world and how to make their Patrons content and happy. During this time, the Anthropophagi organized their great hunts, the Avatars began construction of the great city of Aligon, the Dragons oversaw the creation of their hordes, and invented coins for this purpose (though nobody knows why Dragons covet coins), the Elementals founded their forges, the Fey established their courts and built the four Seasonal Cities, the Shinigami built their sacred Mounds, and the Titans built their mountaintop temples. The world was at peace, and every person knew their role and purpose.

Then the humans arrived. Twelve at first -- six men and six women. They founded the settlement of Dragonseye along the shores of the Nereid Sea in secret. By the time the Patrons learned of its existence, the little settlement was a walled city protected, legends say, by the Great Wheel. For two hundred years the Patrons debated and argued how to handle the Patronless race. Meanwhile, the mere existence of this city caused discontent in the Patron Lands. Individuals of the servile races, no longer content to be benevolent children under their Patron's care, fled to the City and sought protection under its walls. Dragonseye began to expand quickly and the Patrons continued to dither.

The Fey took the first step, corrupting the human king, abducting his queen, sabotaging the Great Wheel, and almost destroying the settlement. Only the quick thinking of Princess (soon to be Queen) Davra saved the nascent settlement. She managed to repair the Wheel and drive back the Fey and their minions. After seeing the Wheel in action, the Dragons chose to tolerate the settlement and even negotiated a formal pact with Queen Davra. This caused an Oni of the Green Lands named the Immortal to invade, briefly. The settlement used the Wheel again to drive back the Oni and his armies. The Oni was defeated and forced to return to the Green Lands.

Later, the ghilan warlord Nebu pored over the stories of the Fey and Oni raids and discerned a weakness in the city's defenses. With the blessing of his Patrons, and with the permission of the Leviathans, he built a mighty navy and sailed across the Nereid Sea. With an army of wights and ghilan, the necromancer attacked the peaceful city in the middle of the night. Nebu decimated the inhabitants and converted them into zombies and skeletons. The residents of Dragonseye had to flee the city for their lives.

With Dragonseye destroyed, the Shinigami commanded Nebu to return to Duat. But Nebu's ambitions had grown and he was no longer content to be servile. He declared Dragonseye to be his own Realm and that he was the "Patron of Patrons". He claimed that Simeon's artifact imbued him with a power greater than even the Patrons. His massive army struck into the heart of the Dragonslands, slaying halflings and sparti, and driving the refugees from Dragonseye further into the land.

A Dragon confronted Nebu. The battle is said to have lasted two days, and at the end, remarkably, Nebu stood victorious over the body of a slain Patron. This was the first time that a Patron is known to have died, and the shock reverberated throughout the world. In response, the Dragons retreated from the world (to where, none can say), and this allowed Nebu free reign to roam the countryside, converting halflings and sparti into undead fodder for his ever-growing army of the dead.