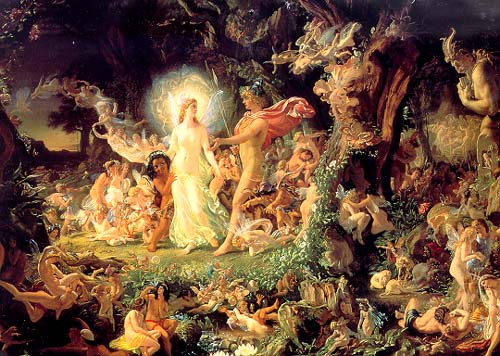 Fey is the Patronage term for any epic tier intelligent creature that is inappropriate as a player race and dwells in the Feywild in the default 4e cosmology. As one might surmise from its name, the Fey Realm is the Realm governed by the Fey Patrons.

Elves come in many breeds to reflect their Patrons' capricious nature. Any fey creature smaller than Large in size and described either as an elf, or as generally good or unaligned will be considered an elf. Courtiers in the Fey Courts, many elves hold positions of respect and power in the Fey Realm. However service under the notoriously temperamental Patrons is no easy task, and over the generations, many elves have fled for the relative stability of the Wild Forest. From there, many resettle in the nearby Free Kingdoms of the Caliphate and Nidvalar.

Amaura: The legendary archer and equestrian of the Fey Realm, who bested all the noble courts and the Wild Fey and is the romantic hero in endless elven tales.
Gamaliel: One of the two "Eternal Elves", Gamaliel is the military genius behind almost all of the Caliphate's military victories, and the man who has organized their great illustrious empire.
Muhajiel: Called the "Prophet" and the titular and spiritual head of the Caliphate, he is the man behind the Caliphate's doctrine of Ferroclasty, the denial of iron.
Hara: With the great dwarf Buka, she helped develop the method of creating warforged (and other wondrous golems) and co-founded the Free Kingdom of Nidvalar.
Demetrius: Founder of the Clockwork Circle, a secret society of golem-manufacturers. Many of them are bitter expatriates from Nidvalar who seek to overthrow what they perceive as a corrupt society.
Onggye: The second monarch of Minia, she is virtually worshiped by her people. Now she guides the nation from behind the scenes, ensuring they stay true to their commitment to eschew the landbonding ritual, no matter the physical hardships it imposes on the populace.

Sometimes the Fey Courts requires a mission in which people get their hands dirty. Goblins love to get their hands dirty. Any fey creature smaller than large, who is described either as a goblin or generally as evil in alignment, will be considered a goblin. These malicious creatures get along best with the darker sorts of Fey.