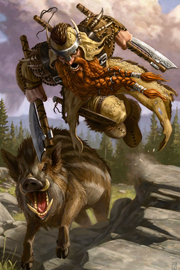 Abilities: Much like fighters, a beast lord mostly only needs strength, dexterity, and constitution; However, wisdom can be important if fighting magic users who will frequently test your will save, as failing a will save vs a suggestion spell can be quite detrimental. Even charisma can be useful if using the snake totem as it helps with bluff checks for feinting and various out of combat skill usage.

Races: Orcs, elves and dwarves make up the majority of beast lords, but many other primitive races come to be beast lords as well, such as gnolls, lizardfolk, and giants.

Weapon and Armor Proficiency: A beast lord is proficient with all simple weapons, plus all martial weapons from the player's handbook except for the short sword, longsword, rapier, scimitar, greatsword, lance, and scythe. Beast lords are proficient with light and medium armor as well as shields (except tower shields).

Totem Animal (Ex): At 1st level, a beast lord chooses what animal he will follow and aspire to be like. The beast lord has several different totem animals he can choose from. Ape, bear, boar, crocodile, hawk, snake, tiger, and wolf. The choice of a totem must be taken at 1st level, and cannot be changed later except under extreme circumstances.

Beast Traits (Ex): A beast lord slowly develops the traits of his totem animal and gains special powers and abilities from them. At first level and every four levels thereafter, a beast lord gains a beast trait from his selected totem animal, which is selected from the list below. These are mostly passive abilities, several of which are actually bonus feats.

Track: A beast lord gains Track as a bonus feat.

To use wild empathy, the beast lord and the animal must be able to study each other, which means that they must be within 30 feet of one another under normal visibility conditions. Generally, influencing an animal in this way takes 1 minute, but, as with influencing people, it might take more or less time.

The beast lord can also use this ability to influence a magical beast with an Intelligence score of 1 or 2, but he takes a –4 penalty on the check.

fix
Animal Companion (Ex): A beast lord may begin play with an animal companion selected from the following list: badger, camel, dire rat, dog, riding dog, eagle, hawk, horse (light or heavy), owl, pony, snake (Small or Medium viper), or wolf. If the campaign takes place wholly or partly in an aquatic environment, the following creatures are also available: crocodile, porpoise, Medium shark, and squid. This animal is a loyal companion that accompanies the beast lord on her adventures as appropriate for its kind.

A 1st-level beast lord’s companion is completely typical for its kind except as noted below. As a beast lord advances in level, the animal’s power increases as shown on the table. If a beast lord releases her companion from service, she may gain a new one by performing a ceremony requiring 24 uninterrupted hours of prayer. This ceremony can also replace an animal companion that has perished.

Woodland Stride (Ex): Starting at 3rd level, a beast lord may move through any sort of undergrowth (such as natural thorns, briars, overgrown areas, and similar terrain) at his normal speed and without taking damage or suffering any other impairment.

However, thorns, briars, and overgrown areas that are enchanted or magically manipulated to impede motion still affect him.

Bonus Feats: At 1st level, a beast lord gets a bonus combat-oriented feat in addition to the feat that any 1st-level character gets and the bonus feat granted to a human character. The beast lord gains an additional bonus feat at 2nd level and every two beast lord levels thereafter (4th, 6th, 8th, 10th, 12th, 14th, 16th, 18th, and 20th). These bonus feats must be drawn from the feats noted as fighter bonus feats. A beast lord must still meet all prerequisites for a bonus feat, including ability score and base attack bonus minimums.

These bonus feats are in addition to the feat that a character of any class gets from advancing levels. A beast lord is not limited to the list of fighter bonus feats when choosing these feats.

A Beast Lord who multiclasses, changes his class, or changes his alignment, retains all class features and proficiencies.