Hey gang. My name is Brandon, and I am a game-aholic. When it comes to RPG style games I will play them. One of my favorite game systems is Exalted. When it comes to D&D there's just something cathartic about character creation. This wiki helps with that. Now, if anyone were to try and classify me into a race or creature (according to my friends/enemies), I am the Rock Gnome, not to be confused with a gnome on a rock. Even though I am gruff, I am relatively likeable...sometimes. Naturally, I would want to do physical work and a lot of it. 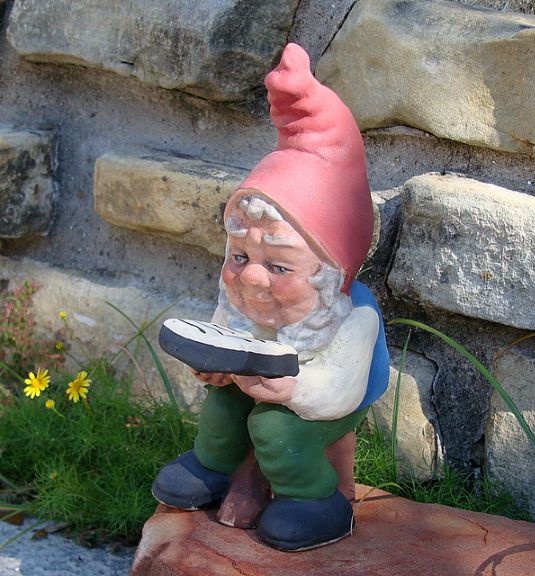 Gnome on a Rock

Likes: Battle Axes and the War Mace; playing evil enough that not even the other players know I am the reason we just got "ambushed;" watching the clip from the game "The Summoner" while wishing I could cast Magic Missile at "The Darkness."

Dislikes: Psionics. Just never really cared for them. Players that turn their "mysterious" guy into "the &%&$@ you don't want to associate with in character."

Add a page(s) for dieties. I know I would like to see one.

I am writing a gestalt campaign titles "The Nexus of the Wyrm" that incorporates the worlds of Barovia, Faerun, Eberron, and Ansalon. The storyline is to take 'Real World' humans that die tragically and transplanting their souls into the Realms of Fantasy. The bodies and classes they are given somehow reflect what they did on Earth. They are given the task of collecting ten gemstones that hold the essences of the most powerful wyrms of all time. They are to do this to protect all life everywhere from the dominion of a despotic diety.

Races: Any non-Player's Handbook but NO Monster Manual.

Hooks: All dieties (yes, good and evil are working together) throughout the realms have been searching for suitable "heroes" to protect the way of life.

Please if anyone has some ideas, side quests, or suggestions for me, please drop me a line.

As I listed above I have a game going. I plan on running it for a while, and am having some fun with it already. Here's the issue. My group knows the way I think. Are there any DMs out there who may have an idea or two I could run with that MAY stump them? Let me know, please.

Korminor has some interesting magical items I really liked that I can adopt for my campaign. Thanks for publishing them.

Narrssuras Stalking Leopard also has some unique items people in my campaign(s) "should" enjoy and/or appreciate.

Marasmusine has been busting his hump getting rid of some not-so-lovely spam.

Zap284 posted many useful monk weapons and paraphernalia, and is working on the very interesting Spiritborn Monk class.

If anyone would like to say something publicly, please do so here.