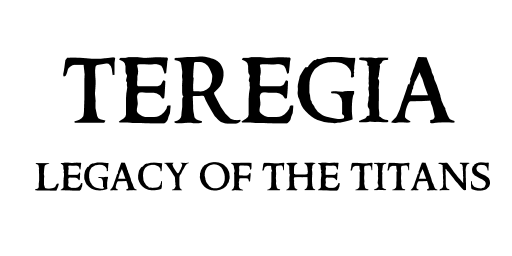 "Do you want adventure? Do you want glory? Do want to riches beyond your wildest dreams? Well honestly, i cannot guarantee the last part. But adventure, oh yes, there will most certainly be that, more than you could ever ask for! What's that you say, you are interested? Wonderful, wonderful, come over here then! I just need you to sign this contract, and these non-liability forms..."

It goes by many other names. The world, the material plane, the mortal realms, the plane full of weakling mortals, but most of all, people call it by it's godgiven name, Teregia. It is a great world, filled with grand oceans, titanic landmasses (fittingly enough), great forests, and many, many creatures, weird and wild. It's also a dangerous place, now more so than ever before.

According to the legend, the titans used to rule the world. The old races, once the slaves and workers for the titans, rose up against their rule, led by twelve great champions. In a war greater then any seen before or since, the titans fought against the champions, and lost. The champions were proud of their victory, but for all their accomplishments, the champions could not find common ground either in worship, ideology or standard hygiene practices. The twelve champions led their people into the world, and settled separately of each other, and as their nations took form, it turned out that many of the champions knew little of ruling, casting their realms into discontence. Soon many realms fought each other for wealth and land, and new kingdoms would rise up to contest the power of the old.

For almost 6000 years, the world has been free from the titans, but for many, the world remains a chaotic place, ruled by petty tyrants, gilded officials, and clueless fools. Meanwhile, old enemies, having retreated to lick their wounds at the dawn of time, gather their strength in secret. Mysterious stories of mass disappearances, earthquakes originating from the deepest seas, and restless dead rising on their own, all happen around the world. Few see the signs, even fewer guess at their meaning, but all agree that the world is more dangerous now than it has ever been before. Perhaps some new champions, like the ones of old, will rise to keep Teregia safe; or as dreaded as the idea is, hasten it into darkness.