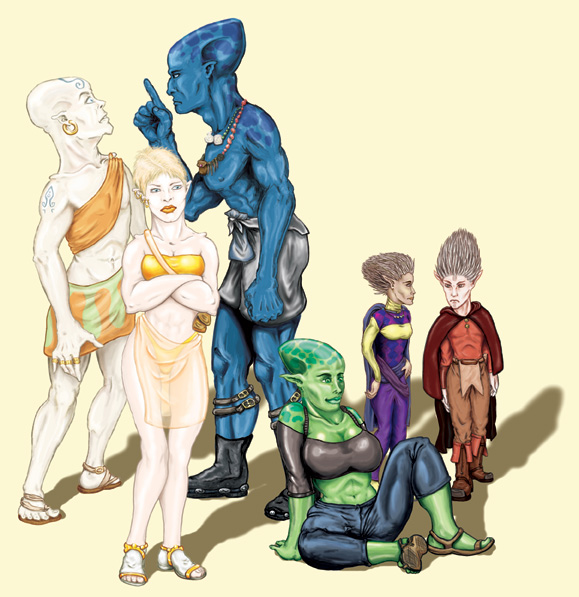 Malaquians are a race of laid-back marine dwellers with little need to interact with the outside world. With a strong sense of community and Matriarchal society, malaquians are passionate about their oceanic homes.

Malaquians can often be outsiders in groups or among the other cultured peoples, mainly because they are called "malaquians" when they prefer their true name, the ayawii. Their stoic nature can make them difficult to befriend. With time and patience they are very hospitable and giving. Malaquians are kind, if untrusting toward strangers, willing to give others a chance. Malaquians become ill tempered and surly away from the sea, and will usually carry keepsakes to remind themselves of the ocean, such as shells or coral and similar trinkets. Malaquians are prone to mood swings and outbursts when away from the water for long periods of time. If they can’t get to a body of water to relax themselves, a long bath, a good rain or a night of drinking will suffice.

Malaquians stand roughly 6' 6" to 7' 6" in height with broad shoulders, short compact chests with long muscular arms and legs. Their heads are elongated toward the back to accommodate their capable brain. Their eyes are commonly dark and vividly colored. They have no hair. Their skin ranges from light blue, purple, green and orange to dark navy blue, brown and gray. They have darker splotches of color on their heads, shoulders and backs. Malaquian women are more common than men and are slightly shorter and less bulky than their male counterparts. Malaquian women also have larger, more sylvan ears than their men. Clothes, restrictive under water, are minimal. Their armor is made from a magically shaped and hardened pearl that is as strong as steel. On land, they adopt whatever clothing and equipment is available.

Malaquians trade with coastal cities, commonly humans and deeka, but they also deal with aquatic elves and merfolk from time to time.

Malaquians tend toward neutrality, with their relaxed culture. They find it difficult to muster the enthusiasm required to have strong moral and ethical opinions, though some malaquians believe in neutrality as a natural state of existence and aim for it on purpose.

Malaquian cities are often in coastal areas, along islands or in lagoons, but rarely in waters deeper than 90 feet. These cities usually extend above the water in places and are built from stone, coral and pearl as metalworking and wood are improper materials for use in the ocean. Occasional freshwater settlements exist. Their cities are ruled by a Royal Matriarch, who bears as many children as possible during her reign. Royal heritage is important to many malaquians, and once every six months a contest is held for all eligible males, in which they compete for rights to breed with the Matriarch. Within their society, swords are only allowed to be used by those with royalty in their pedigrees. Pedigrees are kept by nearly all malaquians with the exception of those who have been banished or exiled. Multiple births are common with twins being the standard.

When fighting in the competition for mating rights to the matriarch, the great staff is their weapon of choice. This weapon is crafted from blue-green pearl instead of steel, though, it weighs the same (as the weight of the item is important to its use). In addition, it has a hardness of 12 and is ornately decorated. These weapons pass from generation to generation.

Malaquians reach maturity by the age of 15 and are as long lived as humans. Malaquian pregnancy lasts only half as long as that of a human mother, at about 4 ½ months. A typical malaquian household consists of members in direct relation to the eldest members. During births and marriages, houses are expanded and can often hold a dozen families. Clan names are not important as long as lineage can be proven in a pedigree marked with the royal seal. Births and deaths are recorded in stone at the hall of records.

Malaquian settlements that were built in ages past tend to be of finer craftsmanship, and may often show signs of their ancient culture, still preserved in huge blocks of stonework. Great seaways stretch along the seafloor, often encrusted with coral, leading the way to malaquian cities across vast stretches of deep and dark ocean, just as roads on land stretch through dangerous forests. The seaways protect travelers and provides shelter along its many secured coves and waypoints. Occasionally, the waypoints will be towers that extend up from the deep and cold waters to offer travelers a place to rest in the warmer waters above will still safe from the dangers of the open ocean.

They often worship and build temples to neutral good Gods, such as Ceila, or worship Gods who watch over the natural world or the ocean, and assure peace and happiness for their followers. Malaquian cities are often adorned with small idols for worship.

Malaquians speak Common and Ayawii. Though, as you might imagine, it is difficult to talk underwater, hence the useful capacity that their minor telepathy provides. Though the Ayawii language is mainly spoken, components of it involve a few gestures, which are widely accepted among other cultures as well.

Since the word "malaquian" is already a bit of slang, they are also referred to in Common as "malaks" and "sea folk".

Names often contain lots of vowels, especially the letter a.

Malaquians occasionally interbreed with the other common races. A few malaquian/aquatic elves, malaquian/humans and malaquian/deeka have been sighted in the past. Thorough crossbreeding capabilities have not been fully researched at this time. Since malaquian heritage is closely linked to humans, it is suspected that they can breed with any race that humans are capable of breeding with.

Malaquians are capable of breeding with merfolk to produce on a rare occasion, and purely by accident, an offspring known as a guromescai.

“I met a young malaquian couple at the fish market while I was searching for crabs that the locals swore by as the most delicious crab anywhere. They overheard me asking a fish monger about my culinary quarry. I was sadly informed that they are out of season for the fishermen, as they moved off to deeper waters. Incidentally, the deeper waters are where the Malaquians hunt them. As I didn’t want to have to wait 2 seasons just to eat a single meal, I inquired about what it would cost to have them shipped in from the nearest malaquian city. Once again, I was sadly informed. The malaquians don’t export these crabs lest they get over-fished.

My next question led me on a fair adventure with what I hoped at the end would be worth the trouble. Having recently come across a charm that allowed me to breath underwater, I sought any excuse to use it to justify the expense, even if I am a terrible swimmer. So, with a small upfront payment, Reuyu and his wife Lyroni became my guides to the underwater realm of the ayawii. I had to remember to refrain from calling them malaquians, especially in their cities, lest I get beaten up or severely scolded and ridiculed.

We departed the next day at late morning for a several hour swim around a coastline with precarious stretches of coral reefs that make shipping hazardous. Swimming was gentle and easy, though often they slowed up to wait for me, which mildly surprised me, as they plod about so slowly on land. The sights underwater certainly were spectacular and enchanting. Oh, how I wish I could have been able to spend a few hours to sketch the things I saw darting about and the myriad of corals and feathery things.

Occasionally, their voices would chime into my head to tell me interesting tidbits or warn me about certain fish and pointy creatures that lurked in the reef. It’s mildly unsettling to hear a voices in your head tell you things, which is even more true if you’ve had any experience with fiends.

Gradually, the reef dropped away and the water deepened until we arrived at their city. As I clumsily swam, I nearly collided with a manta ray. Reuyu looked back and rolled his eyes. Lyroni chuckled to herself. As we swam between the stone houses carved and formed from stone and coral, they led me to their house to pick up their hunting gear, and even loaned me a mesh sack and a spear with a stone tip honed to a razor’s edge. After a quick introduction to all twelve of their family members, we set off out of town, which was much smaller than I thought it would be. I suppose since everything was so closely packed in, there wasn’t much need to spread out. I was later informed that it was just a small town.

We headed west and down a gradual slope that flattened out into a sandy plain. The light was dim and the water was cold. My guides carried on with the search with no problem, poking around in the gray sand, obviously searching for some particular sign. I tried it too, poking about at random.

Within several minutes they had gathered several of the crabs each, and all I had managed to scour was a large snail shell, partly broken, but still with a nice coppery color. With patience and time, I finally dug up my first crab, which clawed angrily at my spear. I fumbled about undoing the drawstring of my sack as the crab scuttled away. In desperation, I lunged for it, where it clamped down firmly on my hand. I tried to scream, but only a few scarce bubbles twittered out. I dropped my spear and tore the blasted thing off my hand and dropped him in my sack. I was really looking forward to trying these crabs now. The thing left only a minor cut, but the salt water stung it and made it all pruney. Unfortunately for me, the blood in the water attracted an enormous school of small silver fish within minutes. I was surrounded and I couldn’t see anything..."

The notes leave off here due to water damage.