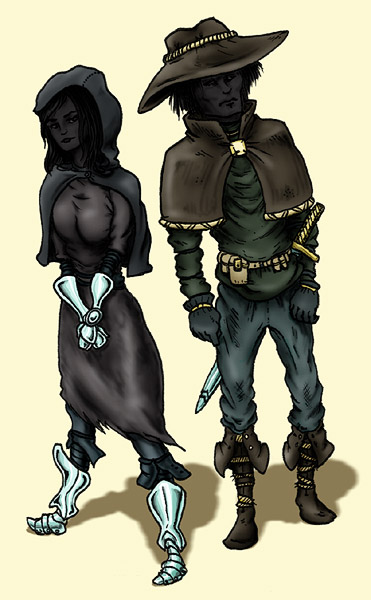 Tar black humans from a world without natural light

Darkkin behave just as humans do, except that most darkkin live in war torn areas, are poor, downtrodden and hungry from starvation as the Dark World slips slowly into ruin.

Darkkin look like humans, but they have tar black skin and hair. Their eyes are a dull gray.

Most races find that darkkin are a little unnerving to be around, as they look like shadow creatures and are often demure and depressed. However, they aren't much different from humans, and thus have the same relationships with other races as humans have.

Darkkin may be of any alignment.

Darkkin live in cities in the Dark World, and when they travel to the Material Plane, they typically only come out at night, or even travel underground to keep out of the sunlight.

The Dark World is a harsh and oppressed land. The stone cities of the darkkin are slowly swallowed by the sands of great deserts that dominate the darkness. Food is scarce as plants only grow in small groves lit by magic. The darkness of the world is weak and light penetrates twice as far as it would elsewhere. Scavenging animals are hunted as food in the alleyways where drifts of sand wash in constantly among the many sandstorms in the darkness. The air is always a mild chill and the skies are clear. Water is welled up from the depths of the ground, pure, fresh and cold. Dark dragons demand sacrifice from the people as they offer their magic and protection from complete annihilation as the desert slowly claims their lives and their spirits.

They set up temples to Guhlzermelth and Paeña, though, with the passing of both great beings, this worship is done in secret.

Darkkin may also pay worship to other good-aligned deities.

Darkkin share much of the naming conventions of humans.

All darkkin are capable of contributing to a Darkkin Ritual. These rituals are very limited, and come with several restrictions. Darkkin Rituals cannot perform epic magic.