The cursed form of aroghin. Strong but simple minded. 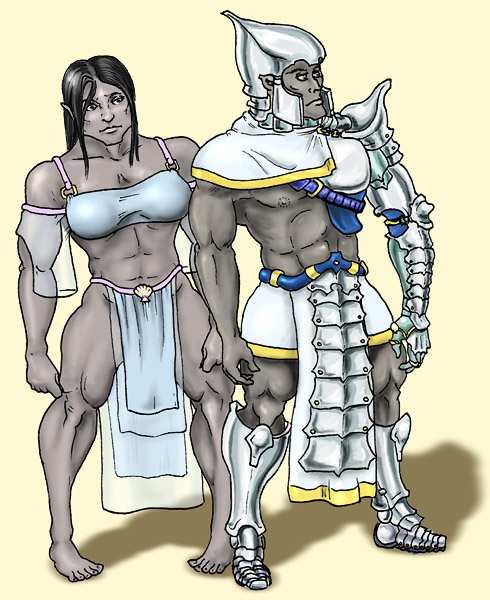 Granlings are mild mannered and happy-go-lucky, finding joy in the simple pleasures of life. Though, when angered, they don’t restrain their strength and often make decisions without reflecting on the consequences, living in the here and now. They form friendships quickly, and are not against dropping old friends if treated poorly. People often describe them as big children, though they don’t complain nearly as much when they don’t get their way, as they are often used to not getting much within Aroghin society. A newly transformed granling is prone to mood swings while adjusting to the inability to think and understand the world how he used to.

Granlings are mountains of muscle. They stand 6’ to 7’6’’ tall, growing about a half-foot in height from their aroghin form. Other than looking like body builder versions of aroghin, the two appear the same.

Unlike their aroghin brothers, granlings get along well with other races. Since they have little fear of what they don't understand, the outside world feels welcoming to them, and most other races would rather keep them happy than have to deal with what happens when they get mad.

Granlings have no strong inclination toward a particular alignment, often adapting to the manners of those around them rather than making decisions for themselves.

The lowest class citizens are the granlings, tending to be little more than slaves or guards, using their dim wits and great brawn to their best use. Granlings, at least those who are not slaves, live in communal groups and share everything they own with each other. Those who are slaves work hard labor for their aroghin masters, content to have food and a place to sleep, not caring or knowing much else. Granling cruelty is not tolerated, as they tend to lash out against anyone who treats them poorly. Granlings are often employed as guards, rowers on ships, gladiators, porters, and other professions that require strength or are boring. Granlings can’t have children as part of the curse. With aroghin low birth rate, they have a difficult time maintaining a steady population.

Granlings are often too dim to practice religion themselves. They merely follow the practices of those around them, believing much of anything that is told to them, they are often easy to convert, but not very faithful followers. They are often worshipers of strong Deities, such as Myillz.

Granlings speak aroghin, and often stick to the harsh words, which are easier for them to speak. Granlings can read and write, but with great difficulty.

A family is disgraced when a member uses the curse, even in the direst situation. A Granling looses his surname and is disowned, or even enslaved by his former family as a means of atonement. A Granling that once had a wise name is given a strong name instead, or is simply called Granling when no other granling are present.