Inquisitive fey who are born, grow old and die within a single year. 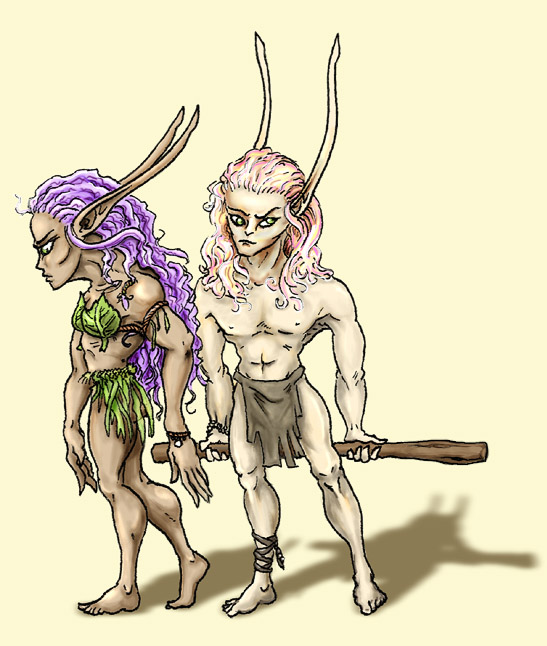 Yearlings are known as caestelphia in the Sylvan tongue. For this reason, most peoples prefer to call them yearlings.

Yearlings are highly inspired and quick learners. They don't waste time dawdling over what might have been, or endless possibilities. They act. The young turn aged quickly, and every moment it a precious wonder as each experience is new, and in their short time, nothing is forgotten. Because of this, they stare in awe and wonder. Their curiosity and little experience often gets them into trouble, as they fall victim to tricks that seasoned races learned from long ago.

Yearlings are averse to steel and iron, and suffer disabling morale effects when in possession of it. Precious metals (such as gold, silver and mithral) don't bother them.

With broad shoulders, strong arms, and bulging chests, this fey creature appears brutish, but its pale soft skin, extremely long and delicate ears and gentle inquisitive face shows its true nature. Yearlings, unlike their delicate brethren the pixies, are tough and rugged, as they have no magical powers to protect themselves. Without this magic, their bodies are less protected from the pains of life, and many yearlings are scarred in their short lives. Their large, pale-hued eyes dart about with curiosity. Long pale hair flows about their shoulders and backs. They tend to wear loose clothing, but those in the wild tend to wear no clothing at all. When they are young, They are strong and lean, bounding over obstacles in the forest. As they age, their faces do not wrinkle, but they grow more pale and their bodies shrink from their weight loss. A yearling is as tall as an elf, but of a thicker build when they are young.

Most races pity and sadness at the short lives of the Yearlings. Other fey, who are typically very long lived, or even immortal, look down at them with disgust, as if the race of yearlings are cursed. They are hardly welcome in elven cities, who find them irritating with their constant need of information. Humans tolerate them, but not in large numbers. Most other races find them meddlesome. Because of their curious nature, they tend to want to tag along, and this can make them a greater nuisance.

Because yearlings grow so fast, they are easily impressionable. Because of this they quickly take to the alignment of those around them. When left alone in the wilds, they tend toward neutrality.

Yearlings live mostly in the untamed wilds, wherever enough food can be found to survive on, and with their quick lives, they tend to live in areas that are bountiful year-round. Yearlings do not gather in large numbers, and survive by hunting small animals and gathering fruits, shoots and tubers. When they do venture into cities or encounter civilized races, it quickly changes their lives forever.

Yearlings have little reason to worship Gods, unless someone convinces them that they should. However, this does not mean that the Gods have abandoned them, and a yearling can quickly take to a cause and become a servant of any deity. Though, most often, it is the agents of the forest who call upon them to protect the woodlands.

Yearlings speak Sylvan, but also pick up Common right away. Sylvan is a complex and fluid language, and since yearlings are so short lived, they are only passable speakers. It is thought they learn Common by spying on travelers when they are children.

Yearlings are often named after basic Sylvan nouns, rather than traditional fey names. These names are most often translated into Common around other folk.

Some yearlings are tougher than the rest of their kin. They somehow attained the magical nature inherent in other fey. Add these traits to the standard racial traits to build a +1 LA yearling. These yearlings are known as caestelphia zuhl.

Yearlings reach adulthood at 3 months. Pregnancy lasts 9 days. At 6 months, they hit middle age. They rarely live to see their first birthday. As such, they don't keep track of time in the same manner that other races do. Yearlings only meditate for 2 hours a night, and while they do not need to rest for 8 hours to regain spells, they must refrain from participating in strenuous activities during that time. Because of this, they make excellent night watchmen.

Yearlings have excellent memories, and as each day passes, they can recall details of faces, emotions, sights, smells and events with marvelous clarity. While living only a short year, they retain the vivid memories of an entire lifetime. For this reason, it is wrong to pity the yearlings, for their lives are short to us, they burn bright while they are here.