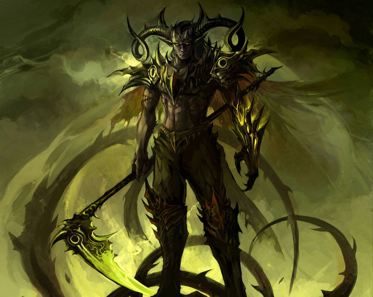 Conduit of the Lower Planes

"My powers are more than enough to deal with the likes of you!"

A fiend is more than an individual; he is a representative of a particular brand of evil, and that role carries power with it. To become a Conduit of the Lower Planes is to embrace that role and become a living pathway by which the energies of the Lower Planes can be made manifest. Raw magical power is the result of this process, and a fiend that walks this route refines his mastery of his innate mystical arts to a terrible degree.

Making a Conduit of the Lower Planes

Abilities: The Conduit of the Lower Planes primarily performs spellcasting via an unusual mechanic, Spheres.

Races: The Conduit of the Lower Planes is only available to creatures with a plane of origin in the Lower Planes. Creatures from the prime material plane whose ancestors were from a Lower Plane may take this class.

Petitioner Immunities: A Conduit of the Lower Planes gains his power from a specific lower plane, and is protected by the nature of that plane:

Petitioner Skills: A Conduit of the Lower Planes gains his power from a specific lower plane, and at 6th level gains abilities from the nature of that plane (this must be the same plane as was chosen at 1st level):

Sphere: Sleep. This gives Deep Slumber as a Spell-like ability once a day.

Religion: Much as the Fiendish Brutes don't worry about religion, neither do Conduits.

Other Classes: Paladins and goodly clerics do *not* like Conduits of the Lower Planes? Why? They're a walking pipeline to the magic of the Lower Planes! Aside from that, they could get along well with casters in general, because of their common interest in magic.

Combat: Conduits throw around spell-like abilities, but they have 3/4 BAB, so they can mix it up in melee a little bit; they are more certain to hit with a Touch Attack than the usual Wizard of Sorceror.

Advancement: The other two Fiendish classes, Fiendish Brute and True Fiend would help increase the physical abilities of the Conduit. As a side note, if a Conduit specializes in the Fire and Pyre spheres, he can't go wrong with taking Fire Mage. Also, the Conduit can pick up some extra spellcasting as sorceror.

Conduits in the World

Conduits of the Lower Planes are walking lines to infernal magic. Despite that, what they do with that magic is up to them.

Daily Life: Conduits don't have to have a set routine, unlike wizards and clerics and druids. So it's pretty much a crap shoot.

Notables: None I can think of.

Organizations: Conduits aren't any more inclined to band together than other classes, but should a group of them cooperate, they could unleash frightening amounts of magic--waves of fire, sheets of ice, and hordes of terrifying apparitions.

NPC Reactions: Conduits do not look particularly fiendish (unless they've taken fiend feats), so they get along with commoners fairly well. Still, good religious people do not like them, the prejudiced so-and-so's. Casters are likely to express interest in the abilities shown by the conduits.

Characters with ranks in Knowledge (Planes) can research Conduits to learn more about them. When a character makes a skill check, read or paraphrase the following, including information from lower DCs.

Conduits in the Game

Conduits bring spell-like abilities and weird bonuses to a party. They can also score some free item creation feats to get equipment cheaper. Or they could use the feats to go fiendish, with claws and slime trails and swirling clouds of fire.

Adaptation: You could easily make this a kind of Sorceror class tailored to whatever theme you want--Good, Evil, Law, Chaos. You just have to come up with new Spheres and new bonuses to get.

EL 9: Hakor is depopulating towns with his spell-like abilities to make a zombie army. Stop him on the Kyserian Plains!

Hakor is an overly ambitious Conduit who wants to make an empire of undead, with him ruling the top. He's a big man--over six feet--and his hair and clothing is covered in frost; you can't even tell his hair is black. He also has unnaturally bright blue eyes--but they're different shades of blue. His Elemental Aura ensure he's surrounded by a constant swirl of ice crystals (unless he has a reason to turn it off).

He has quite a lot of low-HD zombies from depopulating villages. He also made his own weapon. To get to him, you'd have to hack your way through a lot of low-level zombies. But melee is tricky, because he does 4d6 cold damage to those within a ten-foot radius (every round at the start of his turn).

He has the Bone, Cold, and Terror Spheres from the Tome of fiends, giving him the ability to turn anyone killed by his spell-likes into a zombie. He also has the [Cold] subtype and can make an intimidate check once a round as a free action. He took Cold and Terror twice, giving them to him 3/day--and then his second level of Conduit lets him use his lower-level spell-likes more often (See Below)

Hakor is meant to be a quickie little adventure--very simple.

Here's his Spheres and the number of times a day he can use them.

Special: Any creature of 10 HD or less killed by one of your spell-like abilities rises as a zombie under your control, with no control limits.

Special: You gain the [Cold] Subtype.

Special: Gain Intimidate as a class skill, and may make an Intimidate check to Demoralize Opponent as a free action once a round.