The Age of Pawns was a period of time when the rule of the Three Kingdoms suddenly fell into disrepair. The name is so called due to the view that it was the era when the rabble, or "pawns" came into rule. According to texts, the seams which held the kingdoms together began to fall apart due to the many different races and cultures which became discontent with coexisting. Differences became exacerbated and thus led to infighting and the battles of many revolutionary groups to usurp control. For example, you would have the two gith communities warring against the elves or dwarves, all within the borders of Tyrakia. Or you could be dealing with uprisings from orcs and the goblinoids, who do not believe in sharing one nation's umbrella in Sarateo.

Some historians named this age quite literally, viewing the warring factions as mere pawns to powers behind the curtain. There is evidence that higher nobles within the factions were in fact going at it for power. Ultimately, they resorted to rousing the mobs to destabilize the institutions for them so they could swoop in to the reins of power. However, this worked too well, and ultimately the chaos would spin out of control, leading to the Age of Flies. 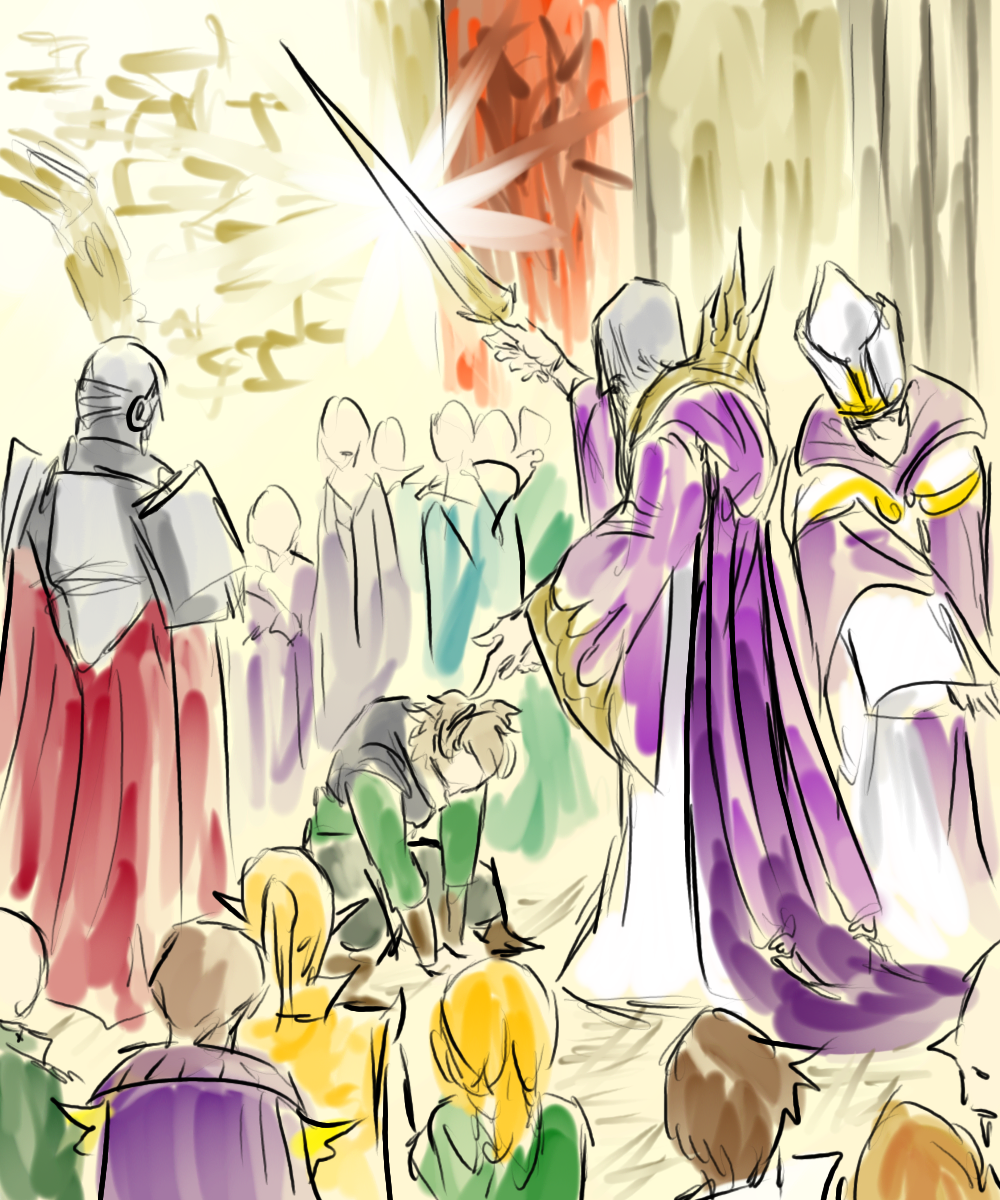 "Anointment by Sword" By Yanied

According to historians, there was one chance which could have averted the crisis that was the Age of Flies. If the nations had a single unified front, they could have forcibly quelled the fighting and perhaps retained the land as it was. This nearly came to fruition upon the rise of a certain, unnamed youth in the kingdom of Camus. People retroactively dub him "The True King."
Supposedly, he was a simple squire who rose through the Camutian ranks of knights, from the bloodline of elves and humans. He was, according to legend, a just and powerful but stern warrior, and very wise and strong for his young age. Originally, he was in good favor with the Camutian king, Herdatum III. But he soon caught the eye of the Violet Triumvir, who at the time was at bad odds with the other two in the governing Camutian Triumvirate. The Violet Triumvir solicited the youths skills and had him anointed as the rightful king of Camus, angering the king and the aristocratic respresentative.
The two other triumvirs thus united and sent their forces to assassinate the youth. However, with the will of the people behind him, the youth allegedly won 104 battles against the king's armies. At the final battle, Herdatum himself rode out to confront the youth, and was unhorsed. The youth spared Herdatum's life at sword point, and then claimed the throne for himself. As the new king of Camus, he saw his mission as one to unite all the nations into one to stop the fighting.

The True King, for the last 50 years of the Age of Pawns, fought to defeat all other factions of the time, starting with those skirmishing at the Tyrakian border. After those were quelled, he mounted direct frontal assaults on the Tyrakian kingdom itself, shattering former peace treaties which held the three kingdoms at bay from one another, starting the wars that would be known collectively as the Camutian Crusade. Upon doing so, he triggered Sarateo's retaliation, for fear that if Tyrakia fell, it would have to stand alone against Camus. History here blurs in line with legend, as exactly how the youth king accomplished his conquests is unclear.
There are speculations that he had a divine force behind him, believed to be the goddess of heroes, Valia. Some believe he had favor of more than one god. Many attribute his power to the Royal Sword, a magical blade capable of not only empowering and protecting its user, but also slaying vast amounts of enemies. The True King has believers who think him a god among men, and believe his own mental prowess is discounted in these theories. He is also rumored to have had boundless charisma which allowed him to turn many foes into his own allies, thus replenishing his ranks. Regardless of the method, the youth king was exceedingly close to defeating both Tyrakia and Sarateo and quelling the factions. It seemed as though unification would be imminent.
However, at the final battle, the Battle of Yrelsi, where the three kingdoms meet, it is said the youth king never appeared in battle. It was at this time that he is believed to have somehow disappeared off the face of the world. Without his guidance, the forces of Sarateo and Tyrakia slaughtered the Camutian army then and there, and shattered the unity that had been so painstakingly built. Factionalism resumed and the state of affairs fell to disunion once more as the weakened kingdoms now had to deal with the splinters, that were once quelled, now returned with greater fervor and a vengeance.