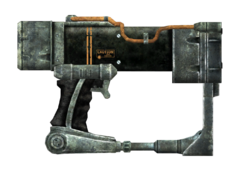 The AEP7 laser pistol was developed for the United States Armed Forces with the intent of replacing the N99 10mm pistol as the standard-issue sidearm in law enforcement. It boasts a very generous battery size, increased range compared to ballistic sidearms and a decent damage output. These qualities make it a sought-after choice in energy sidearms on both the East and West coasts, with the Enclave and Brotherhood of Steel in particular favoring these weapons, possessing the necessary tools needed to repair these easily-worn energy pistols. However, despite the large quantity produced before the war, the AEP7 was never widely distributed, leaving many in factories across the USA to decay with age.

Successful critical hits that reduce an enemy to 0 HP or below will reduce the enemy to a pile of smoking ash, but all armor, weapons, and equipment on the body remain undamaged.