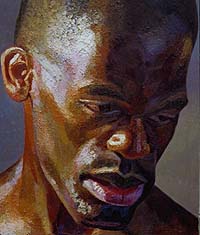 Damien Darnell Dobson, better known as Trip D, is a powerfully profound individual who has made his name through various acts all across Valgora. From his status as the only known dark-skinned Atlantean, to his journeys with Captain Arthus Flintlock aboard The Handcuffed Gopher, and finally as a member of Douie Solitude's band: the Solitude Seven, Trip D is as eccentric as they come.

Damien grew up on the docks of Talara. He was a street child who lived on whatever he could take from those who had it. As an outcast of both the Atlantean Bay settlement and the humans of Talara, Damien grew up fast and was all-to-familiar with racial tension.

On one such day at the docks, Trip D had a chance encounter with one Arthus Flintlock who was attempting to commandeer a small ship from one of the docks. Damien knew the owner of the ship and disliked him, so he assisted Arthus in stealing it. The two struck up a quick friendship and Trip D found himself labeled First Mate in Captain Flintlock's crew. He would spend the next few years traveling the globe.

After a few years on the seas, the crew ran across the famous Douie Solitude and spent nearly an entire month with the elf on board having a grand time. It was during this time that Trip D learned he had a natural affliction for percussionist music and was enlisted by Douie to join his band: Douie Solitude & The Solitude Seven.

Damien is amphibious, and can exist both under water and on land equally as well.