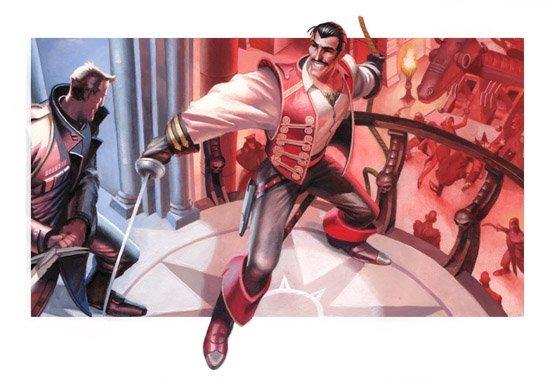 Arthus Flintlock is the legendary Valgorian Pirate who made his name on his ship known as the Handcuffed Gopher with his crew of equally legendary individuals.

Arthus Bartholomew Flintlock was born to Fredrick and Regenia Flintlock in the poor district of Talara's docking district. He spent his early days working in the same smith shop his father was employed at, doing general labor.

Arthus was a trouble youth. He spent his days as a hard laborer instead of attending school, and spent his evenings on the streets of the rough Docking District. Associated with numerous mobsters and gang members by a young age, Arthus decided he wanted neither the life of his father nor that of the evil petty criminals he associated with.

At the age of 17, Flintlock took a sudden opportunity while working the docks and commandeered a vessel that was left unmanned. He was almost caught, but another trouble youth passing by who had some bad dealings with the ship's true owner assisted Arthus in sailing the vessel out of the Atlantean Bay. This young man, Damien, would spend the next few years sailing with Arthus and would come to be his First Mate.

After roughly six months of barely getting by, Flintlock and Trip D managed to take over a major ship with a hold full of valuables. Instantly wealthy, the two returned to Talara under new identities with the new ship. It was here where Damien purchased Arthus' first hat, of which he is very fond of, and from this day forward he would never go by his name unless Captain was spoken alongside it.

The new ship they acquired was elven built in the lands of Lockeport before that country walled itself shut. Last of its kind, the ship is capable of being sailed directly onto the shore, where the underside of the stern can be lowered down (much like that of a castle's drawbridge) to allow the gang to use their caravan quickly and return to the ship. This amphibious quality has assisted the crew on numerous pirating adventures.