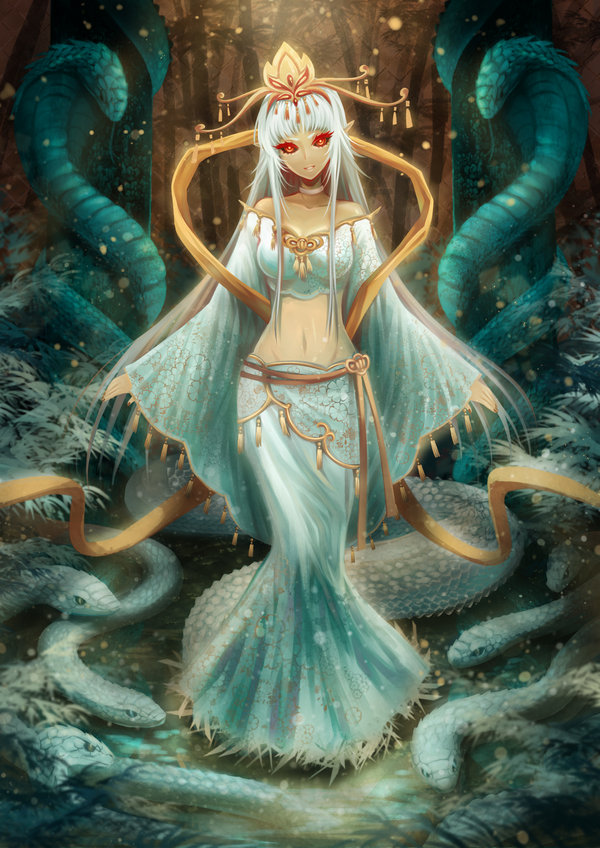 Isis, the Goddess of Naga and Mother of Sol; She embraces any and all who come to her, and shelters them from their hardships.

Isis is the Aesirean Goddess of Refuge, who takes the appearance of an immaculate, colossal female naga, garbed in white silk created from her scales and adored with golden trim and jewels. She is one of the few deities known to actively procreate, though she does so through asexual reproduction, and therefore no mate is required. When she was exiled along with the other Aesir, Isis sought to create a new land for her and her own, unlike many other deities who moved to the astral plane or the elemental planes.

Actively writhing against the earth with her massive coils, she carved the region of Sol into the earth, and left it the desert region it is, today, having originally been a large collection of rocky hills and mountains. During this time, mortal nomads, still rather young in the world of Tirr, came upon her and her new region. These peoples were accepted by the goddess, who protected and sheltered them, allowing them to flourish into the nation of Sol as it exists, today, and remain as one of the oldest empires that remains intact in the world.

As it would happen, though, when Isis finally did reproduce, she had a single daughter, and bestowed that daughter with the greater portion of her divinity that she conserved from not creating her own demiplane. With this, she began to succumb to the effects of the lack of the Light, one of the primordial forces responsible for allowing the deities to retain their affinity. Because of this, like most of the Aesir, she was forced to fall into slumber, burrowing sorrowfully into the sands beneath Sol, regretting that she had to leave her child and her followers behind. To this end, she sought a solution to ensure their protection.

With the help of Mana, Isis forged the 12 Aspects of Isis, the ancient glaives of divine power that she gave to her daughter, thereafter, and instructed her to give them to her twelve most trusted companions, so that they might protect her, and all of Sol with her power. Since this day, many thousands of years ago, Isis has slumbered; her niche ideal, Refuge, being invoked less commonly than one would expect contributing to the lack of awakening. In her absence, her daughters, though long-lived, in the hundreds of years, have passed on the role of Empress to one another as the older would grow infirm and eventually die. While the divinity of their mother gives them long-life, fair beauty, and incredible capabilities, they are not immortal. The current Empress of Sol is the Seventeenth Isis, since the Aesirean Serpent fell to slumber.

While the cult of Isis is relatively small, and completely relegated to Sol for the most part due to overlapping ideals being taken up by the Pantheon's trinity of love goddesses: The Great Mother, Mara, and Era, it is surrounded still by a culture that has thrived in large part due to the actions of their deity, many thousands of years, prior.

Isis' followers espouse the principles of which their deity gave to their ancestors, and to Sol, the values of sheltering the weak, and providing for loved ones and neighbors. They also aspire to keep the land entrusted to them by their deity, and her daughters, safe from those who mean to conquer or to harm, inspiring a fierce loyalty in the people of Sol, even those who primarily worship other deities. Naturally, this poses a conflict of interest in the ideals that require them to accept all comers and to shelter all those who need it. Above all else, Isis loved her people, and she would not want to awaken to find them cold and uncaring.

The mainstream ideology of Isis towards the Pantheon is one of passiveness; While the pantheon is largely responsible for their deity's exile, they are only partially responsible for her slumber. This does not stop a number of fringe groups, however, from secretly despising the other deities of the Pantheon, especially the trinity deities, not for their natures but because their own ideals overlap and impede Isis' own.

Many followers of Isis often see the naga as her chosen people, although some dispute this; Their goddess has never claimed any race or individual except for her daughters as her own, directly. Still, naga of all kinds traditionally find themselves amid hospitality when in the presence of the Serpentine's host.

Isis only has one major temple, in the capital of Sol, where the Imperial Palace is located, and her daughters have governed the region over the millenia. The temple serves as a means of spiritual and physical and refuge, with priests and priestesses regularly comforting the downtrodden and ill, providing a crucial service that cares for those of weak mental states as well as physically wounded. A warm, loving embrace can provide remedy for things a bandage cannot, after all.

The Clergy of Isis tend to be the various races that Sol has taken in and assimilated, typically Human and Common Catfolk. Occasionally, non-Aesirean naga, an offshoot of the Dhrijamka line that has evolved due to Isis' influence in the early days of Tirr, often come to pay respects to their patron deity, and are not uncommon to see in the city, or in the temple as clergy, themselves. This is especially true of the Sishka sub-species, which is commonly found devoting themselves to Isis as clergy.

Surprisingly, Isis was never all that good at maintaining relationships with other deities, nor did she make the effort to after the war against Varglokirr. At that point, none remained who were weak enough for her to care for and shelter, as the war had been drastic and taken it's toll on the deities of the Deific Sphere. It's said that this is what contributed to Isis' desire to go alone to Tirr when the exile began, and to create her own region, attracting weaker mortals to herself.

Although she could be called a deity of love, she has never been considered the same as the Pantheon's trinity, although all three deities generally consider her in great esteem, and the Great Mother especially empathizes with her, and comforts her personally when she can find the time to slip away. Mana and Bahamut are common associations, the former because she tends to meddle with all of her fellow Aesir and was the one who assisted in the creation of the Aspect of Isis, and the latter because his ideal of Magnanimity, and hers of Refuge align in many ways, and she is a good deity whose principles are akin to his.

Jubila appreciates Isis, because the culture she beget is quite fond of dance, song, and revelry in general, appearing as an incredibly exotic and fun-loving culture to the rest of the world. Balthazar, despite his usual stance towards the Aesir, finds himself with an uncharacteristically soft heart towards the deity, as he believes her refusal of the Oath was not due to being obstinate or obstructive, but due to a broken heart after those who she cared for were killed in the war against Varglokirr.