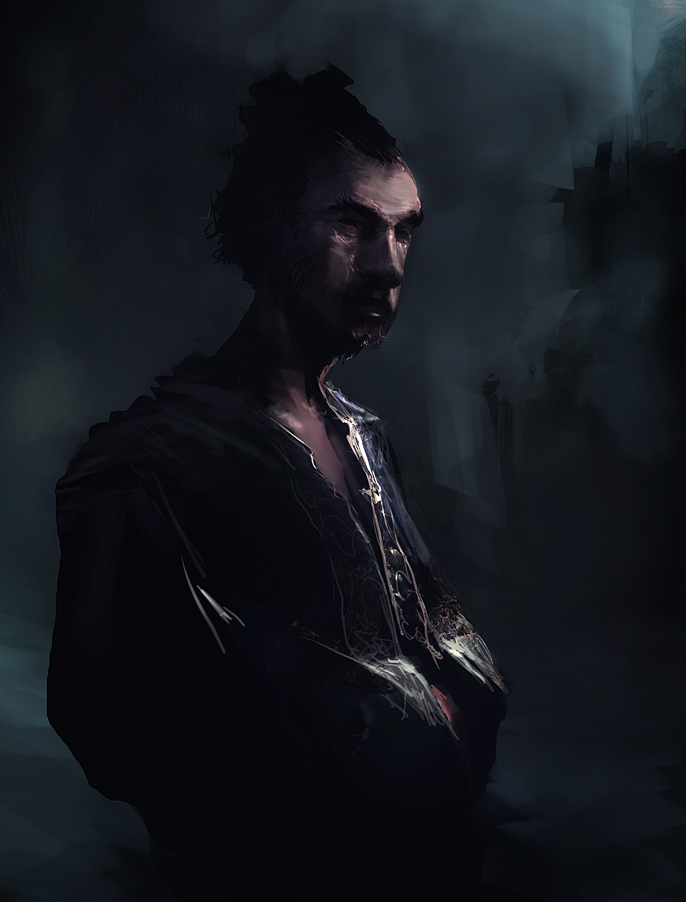 Hobos are homeless, foul-smelling people. Care should be taken when dealing with a Hobo, for they may convince you to do things you would not otherwise do.

Hobos are dangerous foes whose repugnant smell may cause internal bleeding in lesser beings, and whose skill at finding a place to sleep is legendary. If you inadvertently come across a hobo, then beware, they are dangerous creatures who will try to get food from you at any costs, but do not cave, for then the hobo will believe you will give him food again, and again, and you will never be free.

Starting Age: "Simple" or "As rogue".

All of the following are class features of the Hobo.

A Place to Sleep (Ex): A hobo is incredibly adept at finding locations to rest, and can always find a place to fall asleep, no matter where they are or what situation they may be in. A hobo can take 20 on any search or spot check made to find a suitable place to sleep, even under adverse conditions. This skill does not function if the hobo is in a place where they cannot survive (i.e. the Elemental Plane of Fire or the bottom of the ocean).

Power Beg (Ex): At 5th level a hobo gains the ability to beg a creature for something in such a way as to irritate them to the point that they wish to leave the area as soon as possible. At this level a hobo can take a full-round action and beg a single, intelligent being within earshot of the hobo for something. The target of this beg must pass a Will save (DC 10 + target's Intelligence modifier + hobo's Wisdom modifier) or become fed up with the hobo and making any attempt possible to leave the general area of the hobo. If the target of this beg is attacked before they can leave the area, or is otherwise interrupted, they immediately come to their senses and return to the matter at hand. Power beg is a sonic, mind-affecting effect.

Are You Gonna Eat That? (Ex): At 6th level a hobo gains the ability to procure food under any situation, no matter how much danger they may be in. A hobo can take 10 on any skill check made specifically to procure food even under adverse conditions.

Power Nap (Ex): At 10th level a hobo gains the ability to get the most out of their sleep, even requiring less sleep than others. At this level any time that the hobo sleeps, they only require half as much sleep than other members of their race. if their race does not require sleep, then they only require half of any other kind of rest that their race may need. In addition, the hobo can also heal 1d8 points of any ability damage to any one ability score whenever they sleep.

Power Snack (Ex): At 15th level a hobo gains the ability to survive on very little food. At this level the hobo only requires half the total amount of food in a day that they would otherwise require in order to be comfortable. Additionally, if the hobo eats an amount equal to what they would require normally, then they heal 2d6 hit points in the process.

Improved Are You Gonna Eat That? (Ex): At 16th level a hobo's skill in procuring food reaches an impossible status, allowing them to procure food from a location even if there was no food there in the first place. At this level the hobo can take 10 on any skill check made specifically to procure food even if there is no food in the area for the hobo to procure (if there is no food then raise the DC of the skill check by 5). A hobo can only manage to find 3 meals worth of food where there was none before in a single day with this ability.

Power Stench (Ex): At 20th level the hobo's smell reaches a whole new level of putridness. At this level the hobo's foul smell class ability can be extended to affect Constructs, Oozes, Plants, and Undead creatures. Additionally, all creatures are subject to making a Fortitude save to avoid taking nonlethal damage. Those who fail their throw take 2d8 nonlethal instead of 1d8. The save DC for both the Fortitude and Will saves caused by the hobo's foul smell increase by 5.

Hobo Aura: The hobo's hobo aura bonus increases by 1 every 3 levels after 18th.

Greater Are You Gonna Eat That? (Ex): At 26th level a hobos ability to find food reaches legendary status. At this point the hobo can find any amount of food where there was none before in a single day, additionally, any food that the hobo procures through a skill check that he beats the DC of by more than 5, has healing properties, healing the eater for 1d6 hit points for every number greater than 5 that the hobo beat the check by.

Bonus Feats: The epic hobo gains a bonus feat (selected from the list of epic hobo bonus feats) every 5 levels after 20th.

Religion: Hobos can be very religious, but they don't usually worship an actual deity. They often worship odd things, such as handpuppets, or particular types of pasta. While a hobo worships these things, if he multiclass into cleric, and still worships these things, treat him as worshipping whatever deity has that particular object in their portfolio for the purpose of determining domain choices.

Other Classes: A hobo will behave differently in different situations, First of all, if a hobo sees a character of the opposite sex, they may be very rude, often making derogative comments. Secondly, if a hobo comes across anyone that seems to naturally pity them (such as a paladin or a good cleric), then they will behave as though they are weaker than they actually are, as to receive extra care. Thirdly, if a hobo meets someone who is disdainful of them (such as possibly a wizard or sorcerer), then they will purposefully beg them for something, in an attempt to drive them away.

Combat: In combat a hobo may not realize they are in combat at all, and may continue what they were doing before combat started, such as eating breakfast, until they are directly affected by the battle at hand. Once the hobo is actually in combat, their tactics often involve cowering and begging the enemy for mercy in order to gain the upper hand as quickly as possible.

Hobos can be found anywhere in the civilized world, though they tend to be most commonly found in large cities, congregating in back alleys, abandoned warehouses, and underground locomotive stations. Hobo's tend to have no real purpose in the world as a whole, but they are still common none-the-less.

Daily Life: The daily life of a Hobo consists mainly of finding food, begging, and sleeping, unless of course, they have taken to the adventuring way of life, in which case their daily life is truly unpredictable.

Notables: Vergil Levitas, Male Halfling Hobo: first hobo to ever travel to one of the elemental planes and come back.

Cadwallader Felik the "Fireproof Bum", Male Human Hobo: begged a red dragon until the dragon gave him his entire horde just to make him go away.

Lana Maar, Female Kobold Hobo: accidentally found a lich's phylactery in a small dungeon, broke it, and sold the pieces for alcohol, never realizing what she was actually doing.

Organizations: Hobos have been known to congregate in loose groups around burning piles of trash, and other warm places, if not for any other reason than for comfort.

NPC Reactions: Anyone who meets a hobo for the first time will notice the smell above all else, and will tend to dislike or possibly pity the hobo for this reason.

Characters with ranks in gather information can research Hobos to learn more about them. When a character makes a skill check, read or paraphrase the following, including information from lower DCs.

Hobos in the Game[edit]

Hobos can find a place in the world anywhere there isn't already occupied by an intelligent being. Hobo's are versatile creatures that can adjust to any situation, no matter how dire it may be.

Adaptation: Hobo's can be a rather adaptable class, for example, in one universe hobo's could rule the world in an iron fist, or rather, in another, the situation could arise that a hobo holds the only way to save the whole of existence in his hands.

Sample Encounter: Harlee Quinn was born into an interesting world, one full of neat little places to find thing. Harlee never cared about much, just discovering new things, and he went through his life doing just that, finding things. Until, one day he found something that would change his life forever, a sword. From that point onward, he found people, and learned more and more about this wondrous item he had found, and he became Harlee Quinn, the warrior hobo.