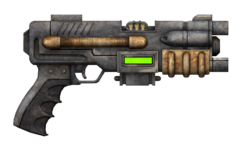 A redesigned, more adaptable version of the Glock 86 plasma pistol, the Gun Runner plasma defender was mass-produced by the Gun Runners for distribution around the west coast, even being sold by competitors such as the Van Graffs. It sports an upgraded magnetic housing chamber powered by two small energy cells capable of creating more devastating plasma bolts.

Successful critical hits that reduce an enemy to 0 HP or below will reduce the enemy to a pile of bubbling green goop, but all armor, weapons, and equipment on the body remain undamaged.