The Fey Realm is located at the southwestern corner of Patronage and consists of lakes, meadows, rivers, rolling hills, temperate mixed forests, temperate rainforests, and verdant plains. It is bounded by the Fire Mountains to the north, Ironguard to the northeast, the Wild Forest to the east, the Savage Sound to the south, and the Mists to the west. The Winter Court rules from the city of Gamradh in the foothills of the Fire Mountains. The Summer Court has a palace outside Samradh on the shores of the Savage Sound. Earrach, the City of Spring, houses the Spring Court on the western side of the Fey Realm (some say, the city once was located in the Wild Forest, but had to be relocated by the Fey when the Wild Forest went wild some time during the Lost Age). Finally, the Autumn Court dwells in Foghar, the Autumn City at the easternmost end of the Realm. The Fey Realm occasionally is enshrouded by the Mists, and even traveling through the streets can be difficult for mortals who have not been properly enchanted by the Court.

The weather in the Fey Realms is as capricious as its courts. In the southern lands severe storms from the Savage Sound dump rain in the summer and snow in the winter. These storms provide freezing temperatures in winter, and leave swaths of clouds heading toward the Fire Mountains all year round. As the clouds reach the Fire Mountains sublimation occurs, creating a temperate rainforest in the northern reaches of the Fey Realm. The temperate rainforest reaches a little south of I'ém. The Summer Court works with the weather to help prevent tropical cyclones and other natural disasters when they can. The rivers in the northern reaches head towards the Nereid Sea while the southern rivers head towards the Savage Sound. 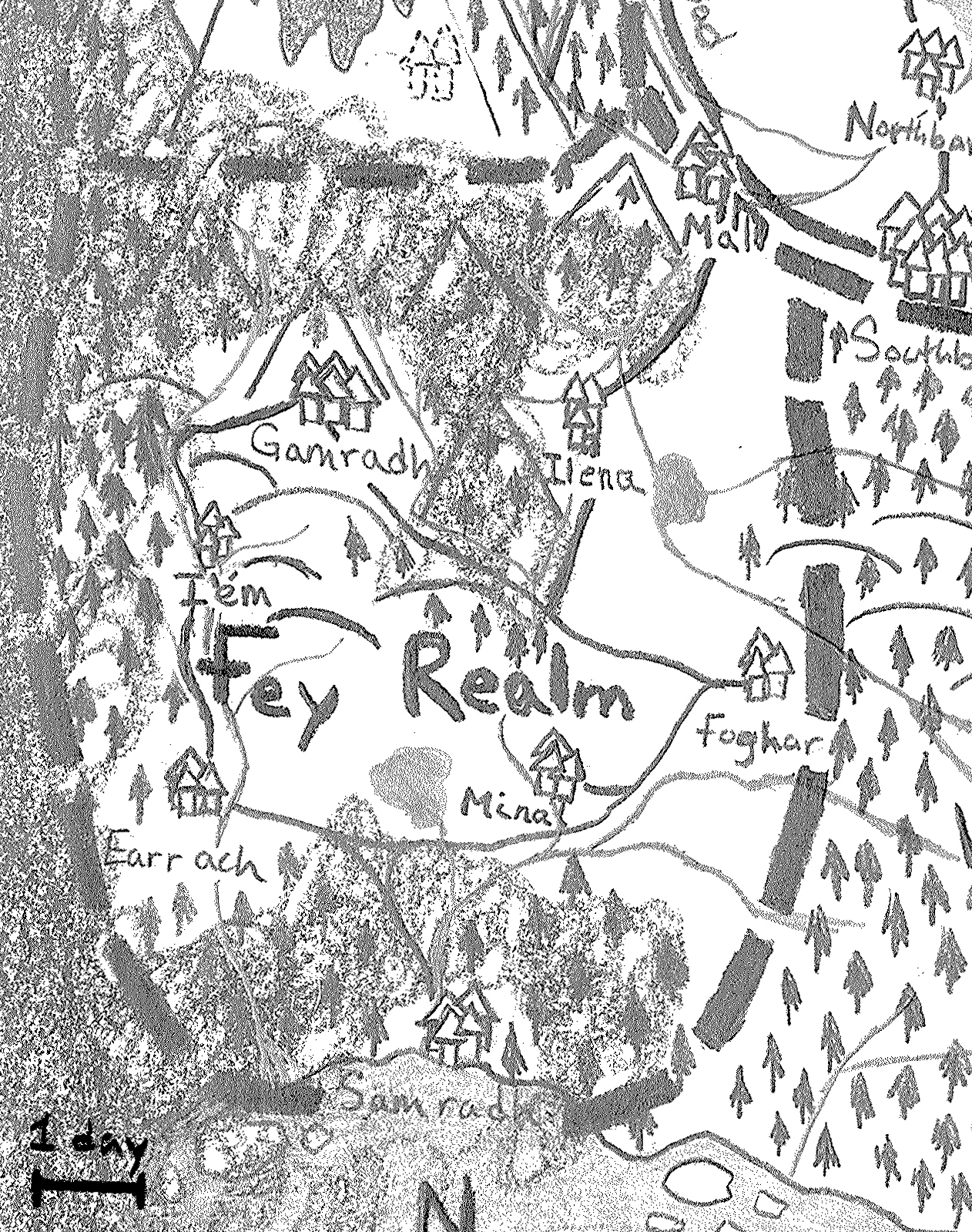 The Fey Realm. The map's scale is based on the average medium race's walking speed.

The Fey govern their Realm with a combination of deadly politics and capricious tyranny. There are four Courts in the Realm, each named after a season, and each centered in one of the four capital cities of the Fey Realm. Each Court is governed by a King and Queen, who rule jointly over their domain. Only two Fey may freely travel in any domain, known only as the Wild Fey, and they answer to no monarch. Otherwise, the courts of the Fey are filled with elves and goblins currying favor from their Patron, as the Fey Courts quietly attempt to outmaneuver one another in an unending, unnerving, and eternal game of give and take.

The Fey Realm rule makes arbitrary tyrants, sometimes benevolent, sometimes malevolent, but always capricious. Much of the day-to-day management of the Realm is left to the most trusted amongst the servile races who rule their fiefdoms in the name of their Patron. But the primary role of any subject of the Fey Realm is to entertain their Patron. Every elf or goblin is expected to have some talent in performance, whether singing, music, comedy, acrobatics, or simply as the butt of a joke (the so-called rumps). Art is the only pastime in the Fey Realm, but it is only jovial and merry to the Patrons and their favored mortals. To everyone else, it is a dark terror.

The 54 Fey have been further immortalized in the playing cards that make up much of the games in Patronage. The thirteen Fey of each seasonal court as divided into four suits (Summer = Diamonds, Spring = Hearts, Autumn = Clubs, and Winter = Spades), and the two Wild Fey are the wild cards decorated in motley. 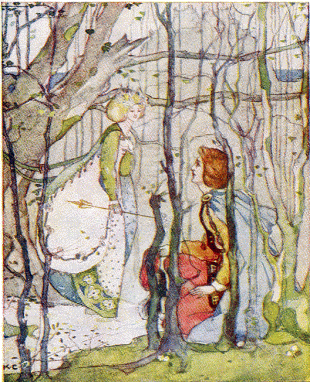 The Fey Realm is a place of mystic enchantment and wonder.

The Fey Realm generally keeps to itself. Occasionally a Fey, bored with the neverending politics and puppetry of manipulating their servile races, will venture through the Mists in order to wreak havoc in the lives of the commonfolk. However, such revels rarely affect the machinations of kings, and become the stuff of fairy tales and children stories.

One exception occurs early in the history of the world. When the humans first rules Dragonseye, they were protected by a Great Wheel that prevented the Patron Races from interfering with them. Many Patrons had attempted to crush the young patronless kingdom with spells and armies, but to no avail. The Fey were more subtle. They waited for a weak leader, and found it in King Yosea. The King was desperately fearful of mortality, and the Fey promised him immortality in exchange for a piece of the Wheel. He agreed, and the Fey stole away not only that piece, but also Yosea's Queen Zebel. With the Wheel partially dismantled, the Fey then sent an army of goblins to destroy the City. Yosea disappeared during this fight but his daughter, Queen Davra, mustered the city's inhabitants to repel the attack and, apparently, managed to repair the Wheel despite Yosea's sabotage. After that effort the Fey Realm again retreated to its borders and left the wild races to their own devices.