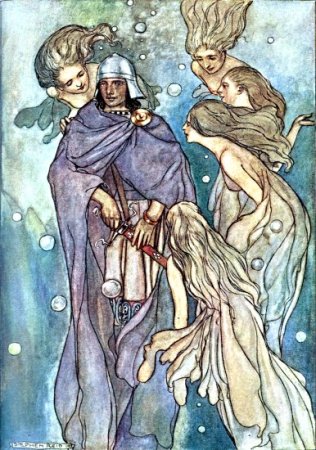 A Warrior meets the local Water Faeries thanks to a Breath Water Spell.

Martial characters use their own strength and willpower to vanquish their enemies. Training and dedication replace arcane formulas and prayers to grant fighters, rangers, and rogues, among others, their powerful abilities. They are often Warrior Caste, Champion Caste, Noble Caste, and Kings. The following are commonly found Marital Classes in Redgate.

Drawing on magical energy that permeates the cosmos, the arcane power source can be used for a wide variety of effects, from fireballs to flight to invisibility. Bards, sorcerers, druids, and wizards, for example, use arcane magic. Each class is the representative of a different tradition of arcane study, and many traditions exist. They are often Scholars, Scientists, and Kingly Advisers. The following are commonly found Arcane Classes in Redgate.

Divine magic comes from the gods. The gods grant power to their devotees, which clerics and paladins,for example, access through prayers and chants. Divine magic excels at healing, protection, and smiting the enemies of the gods. They are often Champion Caste, Noble Caste, and Regional Religious Advisors. The following are commonly found Divine Classes in Redgate.