Carraway is a hilly country dotted with fruit orchards, olive groves, and deciduous forests and has a southern temperate forest. It is mostly a subtropical climate with mild winters and long, warm, dry summers. Only in the southern reaches do harsh freezing conditions occur. The northern rivers flow to the Nereid Sea while the southern rivers flow to the Savage Sound. Bordered on the north by the Nereid Sea, the native shedim and ravin have taken the maritime expertise they learned on the Savage Sound and adapted it to make them the dominant shipping power in Patronage.

Carraway has five neighbors. To the east is Oncia, their ally in arms, and the Alabastrian Empire. They have a mutual bond of trade and security with Oncia since Carraway has pledged to defend Oncia against invasion from the Alabastrian Empire and Oncia has pledged to aid Carraway against Caliphate, their southwestern neighbor. Chisel lies to the south of Carraway. To the west the fledgling neighbor of Dragonseye struggles to survive. Carraway regards this neighbor warily as it has become a refuge for escaped human slaves.

The cities of Carraway are graced with history and natural beauty. Lucinda was one of the first cities, named after the famed Empress Lucinda, and it contains stores of relics of history and art. To the west, the city of Rose is currently home of the Knights of the Compass, and they dominate city politics, allowing to operate almost as an independent city-state. To the east, Biw is a center of trade across the Nereid Sea and boasts one of the largest markets in all the Free Kingdoms. The cities of Cui, Linst, and Ruoste sport expansive orchards and farms providing figs, dates, and precious olives that are traded across the lands of Patronage. 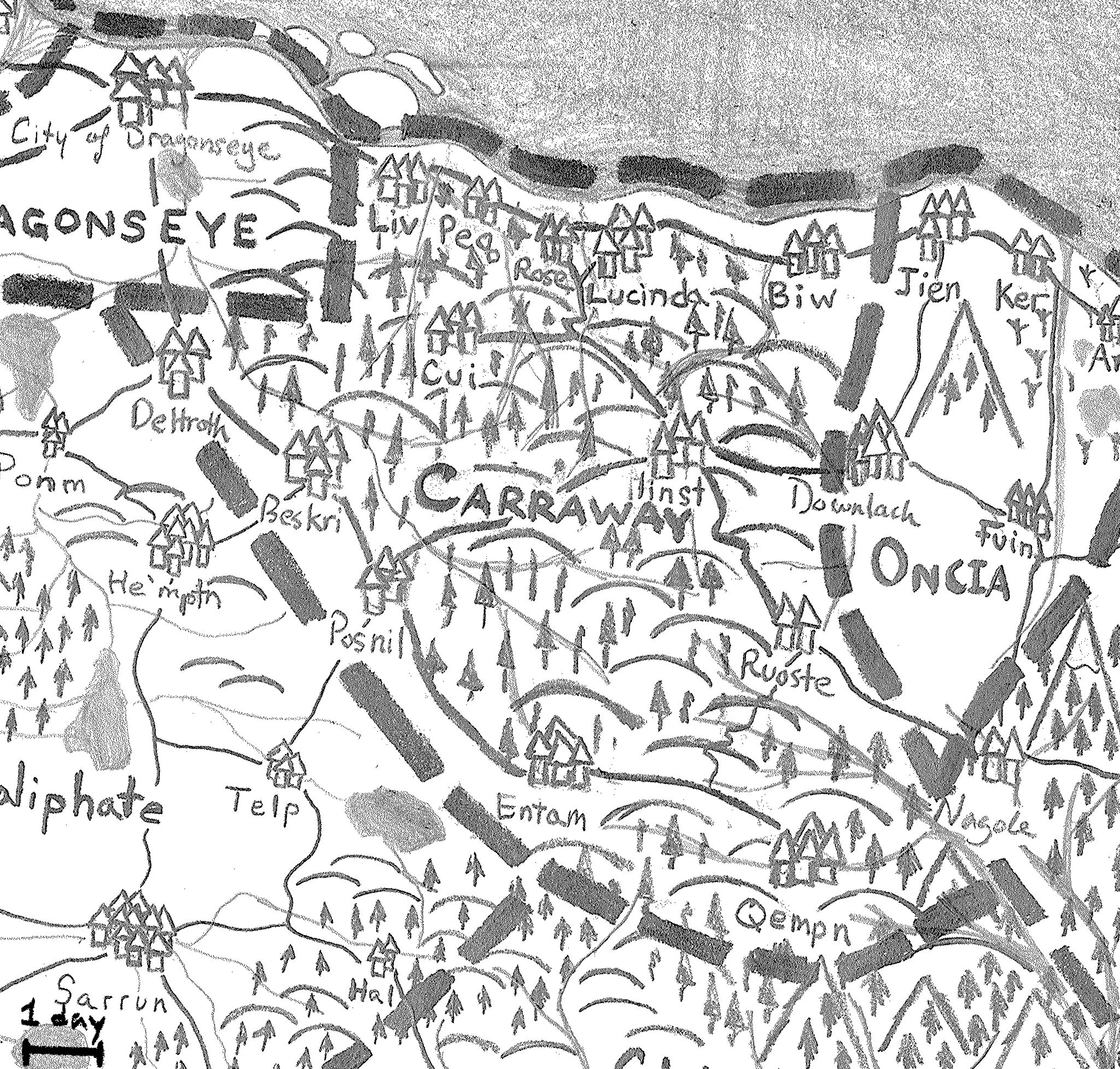 Carraway. The map's scale is based on the average medium race's walking speed.

Carraway is governed by a Peerage. Every person who has received a noble landbond meets every three years to discuss the state of affairs for the Kingdom. The state of affairs approves new landbonds and, if needed, appoints new monarchs. The Monarch nominally governs all of the Peers, but of course such actions are a matter of politics as the Peerage may choose to remove a Monarch who is too active against the Peers. The Peerage approves all taxes and tariffs, all permanent changes to landbonds, and raises any armies needed for defense of the Kingdom. Still, as they meet only every three years, the monarch is in full control of the Kingdom when the Peerage is not in session.

Over the years, the monarchy has accrued more and more power, and some of the Peers have begun to suggest that instead of a monarch, Carraway appoint a Prime Minister as is done in Nidvalar. However, this movement has not gotten a lot of support particularly since most Peers harbor secret desires to one day become Monarch of Carraway and do not want to merely be Prime Minister of Carraway.

Although nominally a nation dedicated to freedom, slavery is recognized and tolerated, particularly of humans, elves, and deva. Halflings are not enslaved, due to the Halfling Monarch's assistance in founding Carraway, as well as the common belief that enslaving halflings will bring a terrible curse on the populace.

Free Carrawegians are a rebellious, noisy lot, who revel in loud celebrations and violent confrontations. Although they adore their monarchs, they tend to obey the law more in the breach, and most port towns of Carraway are havens for smugglers and pirates.

Three hundred years ago, the Caliphate dominated the lands south of the Nereid Sea. The Alabastrian Empire was weakened, distracted by the continuing rebellion of Chisel and the invasions of Duat. Oncia was in hiding, protected by the Order of the Compass and the Halfling Queen, allies she had cultivated over the years. During her exile, she befriended a ravin named Caraw. Caraw was once nearly promoted to Emir in the Caliphate for her leading of several campaigns against the Alabastrian Empire. However, in one campaign, it is said, she was leading a fleet of ships in a raid on the City of Downlach, when a storm struck and her fleet was wrecked. She managed to survive with a handful of companions only to be captured by the Alabastrian Empire and imprisoned in Downlach. The Empire reportedly tried to ransom her, but the Caliphate refused to pay the ransom they demanded. While negotiations continued, Oncia and the Halfling Queen executed a daring raid and freed Caraw from her cell.

Shortly thereafter, Caraw began working against both Caliphate and Empire. She recruited many shedim and ravin to the cause. That cause was creating a new haven for her kind along the Nereid Sea. Along with Oncia's sorcerous powers and her multitude of contacts, the two began a rebellion that struck the Caliphate as they were preoccupied with Ironguard. Caraw personally led dozens of battles, holding both the Caliphate and the Alabastrian Empire at bay. She allied with Chisel and Ironguard against their common enemies. Finally, in the year 2444, she declared the Free Kingdom of Carraway, while she personally witness the reinvestiture of Oncia as Queen of her kingdom in Downlach, the city where it all began.

The next 150 years were spent cementing the kingdom's place in the world. Caraw's grandson, King Marco, negotiated a truce with the Caliphate, wherein the Caliphate agreed to cede their claims to the territory and Carraway agreed to aid the Caliphate in its ongoing dispute with Ironguard and to ensure that no iron goods would be imported into the Caliphate (this move angered Ironguard, and the kingdom has had a rocky relationship with the dwarven race ever since). Over time, trade along the Nereid Sea augmented by good relations with the Order of the Compass, Oncia, and the Halfling Monarchs ensured a period of prosperity and stability for the kingdom.

At the end of the 26th century, Queen Vanni died without any heirs. Several cousins of the late monarch began disputing one another for the crown. Many feared this would lead to civil war, and rumors of invasions from the Caliphate or Empire grew. In the end, a young shedim named Frenza called a convocation of all holders of the landbond. In it, she called for peace among her kind, and she declared that this group, the Peerage, should rule. The Peerage agreed and appointed her Queen. But upon her death, rather than anoint Frenza's daughter, the Peerage met again and chose a Ravin named Nicole (who became Nicole II). This new mode of selecting a monarch became known as the Shedim Dynasty, because of its foundation with the Shedim, and the time before Frenza became known as the Ravin Dynasty, as all the monarchs had been ravin. Since then, the peerage has always selected a Shedim or Ravin as monarch (even though there are other races as Dukes and Counts in the Kingdom).