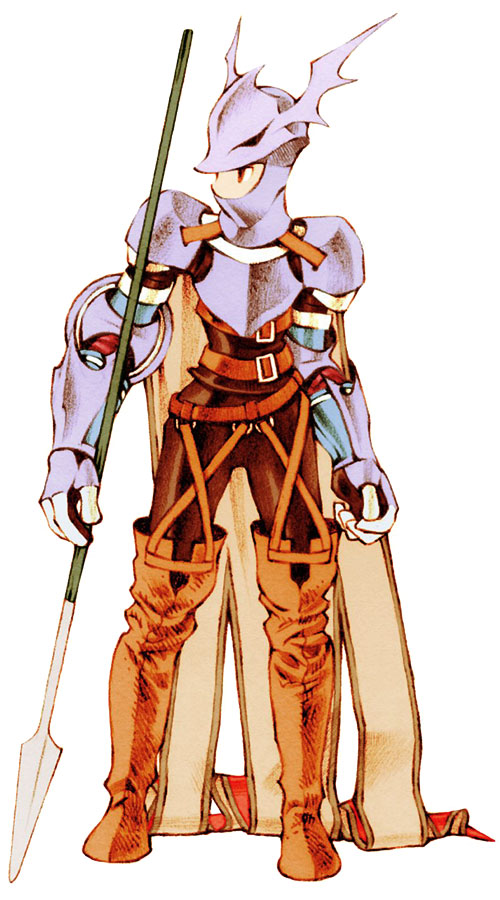 The Dragoons are a Order of Godsreach dedicated to slaying large monsters. Of course, they are most famous for taking on dragons, and as their namesake, these warriors appear intimidating and elegant, giving off vast amounts of power as all opponents fear the pride of the Dragoon's power, leaping into the fray, offensively.

Dragoons are an Order of Knights under command of Godsreach, typically, and have developed a nigh-mythical reputation for their power and skill over larger beasts. It takes extensive training and supervision to be able to become a Dragoon, and due to their Order's base of operations, it is rare that you might see them outside of Godsreach, unless on a mission, and especially rare that anyone outside of Godsreach could teach another the secrets of the Dragoon. However, on the occasion some individuals have impressed certain members outside of Godsreach. Generally through great deeds such as slaying powerful foes such as dragons.

Evasion (Ex): Large creatures can often unleash comparatively large attacks, such as breath weapons, leading a Dragoon to prepare to fight against beasts of such methods. A Dragoon gains Evasion at first level. If she already has Evasion, she insteads gains Improved Evasion.

Jump (Ex): At first level, a Dragoon learns the signature ability of all Dragoons: To jump, and utilize sheer forces of gravity and fearlessness to impale their enemies. As a full-round action, a Dragoon can leap into the air, fall upon her foe, and perform a single attack action. The Dragoon must fall directly onto her target, and she must fall at least 30 feet, succeeding a Jump check (DC equal to (Length in feet + Height in feet×2)/4) to position herself in order to do so. If these requirements are met, the Dragoon performs an attack action on the enemy, the action is just as the normal jump ability, except that for every two points that the Jump DC is exceeded upon success, the Dragoon travels 10 feet higher. At the end of the Jump attack, the Dragoon adds an additional 1d6 damage for each additional 10 feet above 30 feet that she falls onto the target. A Dragoon does not take falling damage during this attack, and can be placed five feet from the target after the attack is complete.

Boost (Su): At 3rd level, A Dragoon's Jump DCs are halved, and the formula for figuring vertical jump height is the same as for horizontal jump height (one foot per point on the check). This bonus does not affect the Jump attack, however, which already accounts for the effect.

Dragoons jump extraordinarily quickly, letting them complete a jump, no matter how far it is, as a move action, and their Armor Check penalty does not apply to their Jump checks; they are always considered to benefit from a running start on Jump checks. Falling damage is zero as long as they are concious and able to land on their feet.

Polearm Mastery (Ex): Dragoons like polearms. Whether they're spears, glaives, halberds, or tridents, they’re simple to use, and the reach makes it easier to damage vital points on their chosen foes: Big, bad monsters. At 2nd level, a Dragoon may use a reach weapon to attack adjacent squares as if it were not a reach weapon.

Improved Jump (Ex): At 4th level, the Jump attack becomes upgraded as the Dragoon learns through experience the power of the ability, and how to better harness it. At the end of the Jump attack, the Dragoon adds an additional 1d8 damage for each additional 10 feet above 30 feet that she falls onto the target.

Furthermore, a Dragoon can be placed a number of squares away from her target equal to her Dexterity modifier, after a Jump attack.

Giantkiller (Ex): A 6th-level Dragoon has some experience with killing big creatures, and has discovered a very interesting fact--big creatures have big vital areas. Of course, having a long weapon helps in exploiting these areas. A Dragoon gets a +2 to their critical threat range for spear-like weapons, for each size category above a medium creature, as long as the target is one size larger than the Dragoon.

Jump Mastery (Su): The Dragoon is now a master of jumping on things to kill them. When she connects with a Jump Attack, her critical threat range is doubled (which takes place after any other threat range bonuses, and stacks with them). Furthermore, the additional damage from improved jump increases by one die level, the damage caused by this attack is doubled. If the attack is made with a Lance, Spear, or similar reach weapon, the damage is tripled, instead. Critical hits deal an additional X3 damage, this example follows the multiplier rules to determine a single multiplier to apply to the damage (For example, a Dragoon using Jump with a Spear (x3 critical), this gains another triple damage from the Jump attack, resulting in a total x5 multiplier). Finally, she may also place herself a number of spaces away from her target, equal to twice her dexterity modifier, bounding back from her target after dealing damage.