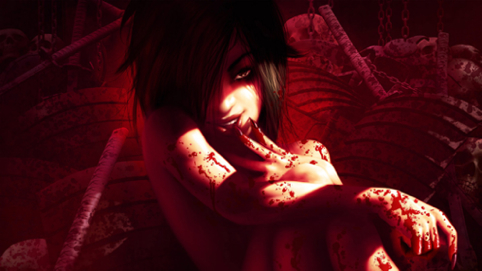 "You look good enough to eat."

The Widow Queen is a necromancer who has been tempted by the awful seductions of vampirism. By drinking the blood and vital fluids of the living, she has grown bloated with magical power and life energy. She sits in a web of minions, trapping in enemies in her sticky machinations, probing their weakness for a soft spot to drive her fangs deep into their flesh.

While her intelligent minions are the most clever and subtle, it is her mindless minions that are the most dangerous. Drained of vital fluids, they mass at her command and will gladly sacrifice themselves for her desires. This pleases her, and she will happily ask for that sacrifice.

Weapon and Armor Proficiency: The Widow Queen gains no proficiency with armor or weapons.

Spellcasting: Every level, the Widow Queen casts spells (including gaining any new spell slots and spell knowledge) as if she had also gained a level in a spellcasting class she had previous to gaining that level.

Paralyzing Touch (Su): With a touch, the Widow Queen can paralyze any enemy who fails a Fortitude save. This effect lasts three rounds, and the save DC is Charisma based. Using this ability is an attack action.

Find the Little Ones (Su): At 3rd level, the Widow Queen may cast scrying at will on any creature or spawn created with her Widow Queen abilities.

Suckle at the Resisting Will (Su): When a Widow Queen of 4th level uses her Blood Drain ability, the Widow Queen may do Wisdom drain instead of Constitution drain.

Create the Broken Ones: Any creature reduced to Wisdom of 0 by a Widow Queen of 5th level can be turned into a unique kind of spawn, Broken Ones. These creatures have all the abilities of the originals, but they gain the Mindless trait and must be commanded by the Widow Queen to perform any action. A Broken One has a Wisdom score of 1.

Seductive Speech (Su): At 6th level, the Widow Queen may cast the spell demand at will as a spell-like ability on any person that has been a victim of her Blood Drain ability. She may also use her scrying ability on any victim of her Blood Drain ability. In this way, the Widow Queen can coordinate her minions and track escaped prey.

Snare the Will (Su): Every round that a 7th level Widow Queen drains a victim of Wisdom, that victim must make a Will save or suffer the effects of a charm monster effect that lasts as long as the Wisdom drain remains.

Create Poisoned Hearts: If an 8th level Widow Queen can use her Blood Drain ability to drain wisdom from a victim on three successive nights (and the victim does not become a Broken One), the victim becomes a unique form of Spawn, a Poisoned Heart. These spawn have all of their abilities, but are fanatically loyal to the Widow Queen.

Flush of Youth: Any night that a 9th level Widow Queen uses her Blood Drain ability, her age category is reduced to Young Adult. This does not affect her mental ability scores. She returns to her true age if she fails to feed for three nights in a row. In additional, she gains a +4 increase to her Constitution, as if from level gain.

Cult of Personality (Su): If a 10th level Widow Queen is ever killed, her remaining spawn and minions form a Tome of Necromancy (DnD Other)#Necromantic Intelligence with a purpose of returning her to life. If they can spill the lifeblood of 100 sentients into a pit, a true resurrection effect will be cast on the Widow Queen, and she will burst forth from the pit. Once the Widow Queen is returned to life, she regains control of her minions and spawn.

Tome of Necromancy (DnD Other)