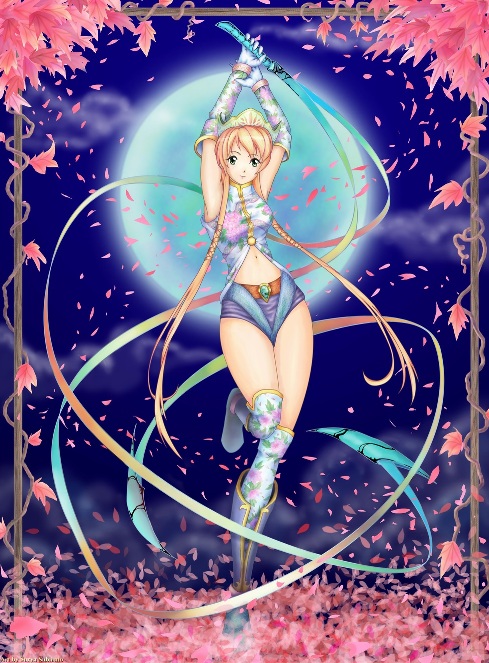 A whipsinger channels the power of anime fanboys.

Whipsingers are masters of the whip. The mix their bardic abilities for music and rhythm with their skills with a whip and turn it into a deadly dance. It is not uncommon to see whipsinger be completely surrounded and come out of the fight without taking a hit.

Many bards who favor the whip learn to become whipsingers as they develop their bardic magic.

The main reason that some bards choose to become a whipsinger is that they want to combine their music, magic, and fighting into a single technique.

All of the following are class features of the Whipsinger.

Spellcasting: At 1st, 3rd, and 5th Whipsinger level, you gain new spells per day, an increase in caster level, and spells known as if you had also gained a level in the bard class. You do not, however, gain any other benefit a character of that class would have gained such as bonuses to bardic music (See below) and bardic knowledge.

Bardic Music: A Whipsinger expands her repertoire of bardic music to encompass new dazzling dance techniques. These effects function just as the bardic music effects described in the Player’s Handbook. Each use of a Whipsinger dance expends one daily use of the character's bardic music ability. A Whipsinger adds one-half her class level (rounded up) to her bard level to determine her number of daily uses of bardic music.

Sadistic Wardance (Su): A Whipsinger of 1st level or higher who has taken Hurting to Heal and also has 8 or more ranks in the Perform (Dance) skill has acquired a taste for inflicting pain with their whip. By expending one of your daily uses of bardic music, you may perform a style of combat known as the sadistic wardance. Activating a sadist wardance is a free action, and once activated, anytime you would heal an ally using Hurting to Heal or anytime you damage an opponent with your whip, heal for the same amount. (Two Wardance abilities may not be used at the same time.)

A sadistic wardance lasts for one round.

Hurricane Wardance (Su): A Whipsinger of 2nd level or higher who has taken both Loud Crack and Lightning Fast whom also has 10 or more ranks in the Perform (Dance) skill may learn how to use this technique. By expending one of your daily uses of bardic music, you may perform a powerful style of combat known as the hurricane wardance. Activating a hurricane wardance is a free action, and once activated, treat each attack made with your whip as if it had a Gust of Wind behind it. Also while Hurricane Wardance is active you may double the Shock effects of Lightning Fast (2d6 of electricity damage). (Two Wardance abilities may not be used at the same time.)

Threatening Reach (Ex): You can now threaten areas with a whip.

Whipsinger Trick: At each whipsinger level you can choose a new trick that you can perform with a whip.

Lightning Fast (Su): Your whip seems to strike your opponents at blindingly fast speeds. Any whip you wield is treated as if it has the Shock property.

Loud Crack (Su): When your whip snaps against an opponent, it makes a deafening sound. Any whip you wield is treated as if it has the Thundering property.

Never Leave Home Without It (Ex): You are a master of making mundane tasks so much more exciting with the inclusion of a whip. You now have such precision with your whip that you can use it to pick up items and have the item moved to you as a move action or use it to make Sleight of Hand checks to pickpocket at the whip's range.

Hurting to Heal (Su): A helpful whip on the back of your ally helps sooth his wounds. You can channel healing spells through your whip, allowing you to use the whip as part of the spell to make a touch attack against the target. If the touch attack succeeds, then the target is affected by the spell.

Painful Lashes (Ex): Your mastery of the Whip allows for more precise deadly strikes. You can choose to deal lethal damage with a whip also it is no longer stopped by armor. At 3rd Whipsinger level increase the damage you deal with whips by two size categories (Medium 1d3 goes to Huge 1d6).

Whirling Deflection (Ex): Once per round when you would normally be hit with a ranged weapon, you may deflect it with your whip so that you take no damage from it. You must be aware of the attack and not flatfooted.

For example: Vincent, holding a +1 whip, attempts to use his whip to latch on to a pillar and swing around the pillar to the top of a dragon's back. The DM has ruled that this is a jump check DC 25. Vincent can add +3 to his his jump check because he is using his whip as part of the action.

Whip Dance (Ex): With a whirl surrounding you, your whip seems like a fluid part of you: a cascade of color, sound, and motion. You may make an extra attack with your whip during a full attack action with an attack bonus equal to your ranks in perform (dance), minus 3, plus any other attack modifiers you have.

Whip Song (Su): You can use the cracks and whirs of your whirling whip to create a beat an melody. You can use a perform (dance) for your bardic music abilities and use the motions of the whip as a somatic component for spells.

Close Quarters Whipping (Ex): You can easily whip opponents that are adjacent to you. You no longer provoke an attack of opportunity when you attack an adjacent foe with a whip.

Combat: Whipsingers are excellent support characters, with the capability to specialize in any role they take. Most whipsingers use their threatening reach for battlefield control.

Advancement: Characters that finish this class can often benefit from levels in the Exotic Weapons MasterCW prestige class.

Resources: There are no organized groups of whipsingers and it is usually a self-taught class. Most whipsingers are mercenaries and sell their skills to the highest bidder.

Using their skills with a whip to get them out of all sorts of near-death encounters, whipsingers are often the type to be found on extremely dangerous adventures.

NPC Reactions: Whipsingers tend to amaze most NPCs with their whip skills. They are often seen as more of a performer than a combatant.

Characters with ranks in Knowledge (local) can research whipsingers to learn more about them. When a character makes a skill check, read or paraphrase the following, including information from lower DCs.

Whipsingers are often the type of adventurer that will go into "The Temple of Doom" or "The Kingdom of the Crystal Skull" without a second thought.

Adaptation: Any bard that specializes with a whip should be able to master the art of becoming a whipsinger.

Sample Encounter: Vincent, a human whipsinger, is on a quest to capture the pirate king alive. He asks the PCs to help him with his plan.