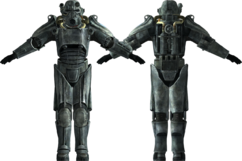 T-45d power armor was the first successfully combat-tested suit of West-Tek power armor. While not as protective as the T-51b, it is relatively more common and can be found in armories across the country on account of being used more by homeland peace-keeping forces than in active duty.

Wearers gain a +6 bonus to strength and dexterity. The Weight of the T-45d Power Armor is 1500 Ibs plus the Weight of the wearer. Wearers also gain a +2 bonus to fortitude saves made to resist radiation. Power armor gives you a +25ft to your base movement speed and allows one to ignore the first 100 feet of falling damage

T-45d power armor comes equipped with a helmet-mounted headlamp that illuminates as a flashlight.

Some weapons deal additional damage to power armor wearers, as detailed in the weapon description.