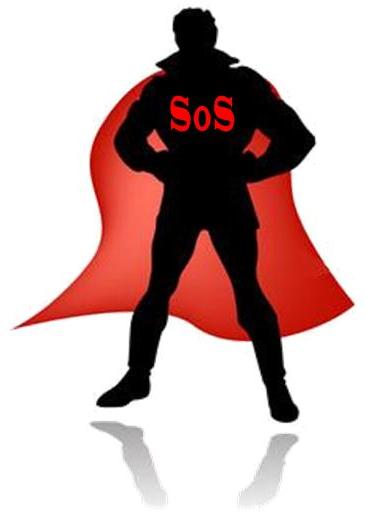 Many Dungeons & Dragons enthusiast have always wanted to play a D&D game with Superheroes. The thought of using superhuman abilities to save the day (or enslave the people), without having to learn an entirely new game, is truly an enticing idea. Sadly, it would be impossible to truly incorporate most superhero archetypes and possibilities into a Dungeons & Dragons game without having to at least learn some new rules and mechanics.

Super or Sinister is just such a set of supplemental rules, to be used alongside the Dungeons & Dragons revised third edition game, which make it possible to play utilizing super powers and heroes as seen in popular comics and film. These set of rules greatly change the dynamic of a D&D 3.5 game, and as such any prospective user or Dungeon Master should greatly familiarize himself with them.

SoS campaigns will be inherently more powerful than typical Dungeons & Dragons games, and may not be enjoyed by all types of players.

Use of the Super or Sinister mechanic modification requires the core content for the Dungeons & Dragons revised third edition game: the Dungeon Master's Guide, the Player's Handbook, and the Monster Manual.

Unlike other supplemental material for the D&D game, Super or Sinister can be ambiguous in places and requires much more understanding and preparation than other material. Although some standard powers are provided for use and as examples, players may wish to create and utilize powers not described. This is encouraged, but will require much leg work by the player and the Dungeon Master to figure out how the power fits into the mechanic and to ensure that all players in a campaign have roughly equal powers and abilities.

Super or Sinister can more accurately be described as the foundation for a Superhero D&D campaign, whereas each individual gaming group will provide the actual structure of the game.

Super or Sinister tries to be as minimalistic as possible when altering or adding to the already-established rules. That being said, player characters still choose races, classes, and skills at start up. The only great change is that the feat system is altered as to accommodate for the super powers or abilities of the characters.

Depending on the Dungeon Master's wishes and the gaming group's wants, the campaign may completely usurp the feats provided in other material or be additional choices. Typically, lower-power superheroes may exist in a campaign that allows both standard feats and Super or Sinister feats, whereas more powerful campaigns will wish to only utilize Super or Sinister feats.

The class structure can still fit in perfectly with superheroes. A character like the infamous Superman has many superpowers, and would need many feats. Superman would take fighter, as that really is what he is, and all the additional feats would allow him many great super powers. However, Batman is talented in many areas but does not have as many super-powers. Batman may multi-class to get the reconnaissance benefits of a Rogue, the martial benefits of fighter, and the willpower of a paladin. This will cause him to have many less super power feats, but he will still be a very formidable opponent.

Prior to character creation, a Dungeon Master should decide just how powerful he wants his campaign to be. Taking input from the players is advised, and in the end all should agree to keep it on a pre-agreed level. Having a Superman in the party next to three Batmans will cause balance issues and drain out the fun. Whatever the choice, stick with it and enjoy being a Superhero.

The Super or Sinister method of incorporating Super Powers into a Dungeons & Dragons game utilizes a feat-based "tree." The player character chooses an Origin Feat, and can build off of that as his character grows in powers and learns to control and improve his talents.

Through natural selection, tampering, or hard training, your superhero has reached the pentacle of athleticism and physical fitness. This Built Body has resulted in a very strong and stout hero who can dish out and receive much more than the common man.

Your superhero is capable of using Elemental Extraction to call forth one of the four classical elements (picked upon taking of feat) and utilizing it for personal needs or gain. With additional honing, a hero may learn to control or subvert the element into many more amazing or devastating forms.

Much like the manipulators who pull the strings of the marionette, a master manipulator is able to move objects without touching them via the use of telekinesis - no strings attached. Through additional honing, the range of items (and eventually living creatures) affected by a player character's telekinesis can increase dramatically.

The Mind Meld origin feat grants a superhero the power to see into the minds of others. Deciphering meanings, uncovering secrets, controlling thoughts, or simple telepathic conversation - the abilities are only limited by the imagination of the player (and possibly the alignment of the character).

A frenzied blur of superspeed, the Road Runner origin feat grants superheroes with the ability to move at an amazingly fast speed. Additional honing can result in speeds rivaling or besting the use of greater teleportation spells.

Size matters grants a superhero the ability to alter their own matter resulting in either increasing or decreasing the mass of their own body. This particular Origin Feat has many variants and one must be chosen upon taking the feat which will specify exactly what type of size alterations the superhero is capable of.

The Winged Wonder origin feat grants the super hero the power of flight. As a new adventurer, this flight ability is not wholly honed and perfected, but grows better as the superhero grows in power (rises in level). Despite the name, this feat does not mean that the character has wings - only the ability to fly.

Although the examples provided can be great for creating "classic superhero archetypes," sometimes a player may have an idea that doesn't fit within one of these Origin Feats. At a time like this, that player and the Dungeon Master should discuss in-depth the player's wanted ability and slowly build it into a workable Origin Feat. Make sure to consult assistance and get reviews so that the custom Origin Feat is comparable to other Origin Feats.

As a superhero grows into his role, and begins to learn more and try more, he will inevitably become better at utilizing his powers - possibly even discovering new (usually similar) powers previously unexplored. These advances in power are implemented by the use of honing feats. Most honing feats have a prerequisite Origin Feat, though some may allow any hero to take.

Although the examples provided can be great for creating "classic superhero archetypes," sometimes a player may have an idea that doesn't fit within one of these Honing Feats. At a time like this, that player and the Dungeon Master should discuss in-depth the player's wanted ability and slowly build it into a workable Honing Feat. Typically, the honing feat should make sense in regards to the character's Origin Feats and super power concept in general. Make sure to consult assistance and get reviews so that the custom Honing Feat is comparable to other Honing Feats.

This much less taxing and easy system has been affectionately called the "lazy man's superhero rpg." The class granted abilities of the party are what signifies them as Superheros, as no npcs exist who have special class levels. This prevents (usually) a comic-book style superhero campaign, but can still many of the superhero plot points: powers beyond the populace, responsibility, admiration and/or fear from the public, a need for dual identities, and so forth. However, the Dungeon Master may still need to utilize those class abilities or become very ingenious in creating appropriate challenges as the party progresses.

Also known as Super or Sinister LITE, the One-Hit Wonder variant is played like any standard core game with the only Super or Sinister supplemental mechanic being the addition of each character's one Origin Feat. This provides the character with one super ability that defines them, and will result in a slightly more powerful game than most. Dungeon Masters utilizing this variant may typically pit the party against challenges rated for slightly higher groups but still only yield out the experience for the proper CR level.

Another exciting, yet requiring more mechanical tracking, method of Superhero D&D play is the Secret Identity system. Using this system, the characters utilize all normal D&D rules while in their respective Secret Identity. They can not use any super power feat abilities while using this civilian facade, and must usually take more precautions than most. When using their Superhero public persona, the character may only use their normal class and/or racial non-super power benefits with an equivalent of half their level. This is because the superhero will rely more heavily on his or her super abilities, as well as want to refrain from doing or acting too much like their secret identity counterpart, as to keep any suspicion far from them.

Creating a powerful campaign will always have a risk of causing balance issues and may end up with one or more players being much more powerful than others. In addition to common issues, Super or Sinister games that also allow normal feats may end up with one player who actually isn't a super hero along side the super party. Some role players may enjoy this, reviling in the chance to portray the "everyman" friend of the supers, but others will feel weaker and grow resentful of the game. Also, some characters risk becoming extremely more powerful than others (see United States of Superheroes vs. Superman court case) and can also result in one player stealing the spotlight while others grow resentful.