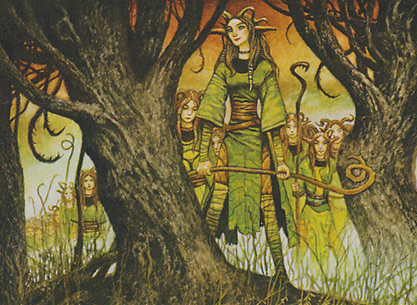 Some striders travel more along the rogues path in that they use the druids environment controlling powers to better themselves as thieves. Some striders are druids who use the rogues sneakiness to better their reverence of the world. Either way, the strider seeks to better himself by becoming intimate with nature and the shadows. Most striders are rogue/druids, though a few high level rogue/rangers may find the class appealing.

All of the following are class features of the strider.

Spellcasting: At each level, you gain new spells per day and an increase in caster level (and spells known, if applicable) as if you had also gained a level in a divine spellcasting class to which you belonged before adding the prestige class level. You do not, however, gain any other benefit a character of that class would have gained. If you had more than one divine spellcasting class before becoming a Strider, you must decide to which class to add each level for the purpose of determining spells per day, caster level, and spells known.

Animal Companion: Your strider class levels stack with class levels from all other classes that grant an animal companion for determining the abilities granted to your companion.

Sneak Attack: Beginning at 1st level, a strider deals an extra 1d6 points of damage when flanking an opponent or at any time the target would be denied its dexterity bonus. This extra damage applies to ranged attacks only if the target is within 30 feet. It increases by 1d6 damage every 3 levels. If a Strider gets a sneak attack bonus from any other source, the bonuses on damage stack.

Nature's Cloak (Su): At 2nd level, the strider attunes his body with the world to provide him with the abilities to get to where he needs to go unhindered and undetected. The Earth softens under the strider's feet, providing him with a +2 bonus to move silently checks when he is on natural ground, such as stone or earth. The earth hides the strider as well, helping him blend into natural surroundings, giving him a +2 bonus on hide checks against natural surroundings and walls made of worked or unworked stone, wood, or earth, but nothing made predominately of brick, cement, or plaster. These bonuses increase by 2 every 3 levels.

Sensory Link (Su): A strider gets ever closer to his animal companion as he grows. At 3rd level, a strider may even look through the eyes of his companion. This is a full round action that provokes an attack of opportunity. The strider sees and hears everything his animal companion does. The strider is still in his body when using this, but his mind is elsewhere, and is flat-footed for as long as he uses this ability. He may use this ability for 1 minute per class level per day.

Nature's Passage (Su): At 3rd level, the earth does not prevent a strider from going anywhere he wants to go. A strider gains the ability to walk through all walls made of non-magical natural material; This means walls made of unworked or worked stone, wood, or earth, but not brick, cement, or plaster. Treat this ability as the passwall spell, except that no "door" is created and only the strider may go through the wall. The strider may use this a number of times per day equal to his class level.

Cornered Prey (Su): At 6th level, the strider and his animal companion learns how to use the earth as their ally. They may use trees and walls and other natural and earth or weather-made obstacles as allies to flank opponents.

Improved Evasion (Su): At 6th level the strider gains improved evasion, this ability works like evasion except that, while the strider still takes no damage on a successful reflex saving throw against attacks, henceforth he takes only half damage on a failed save. A helpless strider does not gain the benefit of improved evasion.

Hide In Plain Sight (Ex): While in any sort of natural terrain, or anywhere that the strider would gain his Nature's Cloak bonus, a strider of 9th level or higher can use the hide skill even while being observed.

The epic strider gains a bonus feat (selected from the list of epic strider feats) at 12th level and every 3 levels after.

By entering the world of the strider, your character enters a world of opportunity. The art of burglary becomes so much easier when the earth approves. Your reverence and honor of nature becomes so much easier when you can get to where you need to unseen. By looking through the eyes of your animal companion, you become an indispensable scout for your party, able to have a harmless animal see what's ahead for you.

Combat: Becoming a strider opens up your combat abilities more than you can imagine. The cornered prey ability gives you the ability to use you friend, the earth, as a flanker, opening up sneak attack advantages galore. Your druid spells can be used to control your battlefield, which makes your battle strategies that much more controlled. Imagine casting a wall of thorns spell behind your enemy, and using it to sneak attack them into nature's oblivion. This is just one of the many tricks the strider has up his sleeve.

The Strider fits into the D&D world pretty well. For example striders can make a living for themselves stealing, working in a thieves' guild, and even some of the more nature revering striders can make a living working for the druidic council. Some Striders can out track a ranger if they really wanted to, and as such they can follow a rangers path of work. Although, for the most part, the strider is more of a loner than anything else; although many times they are very willing to join an adventurer's group, where they make a fine addition.

NPC Reactions: NPCs tend to trust the strider more than a rogue, but less than a druid. striders are generally liked or at least acted indifferent towards. They can be respected or ridiculed, just like any other thief or druid.

Characters with ranks in Knowledge (Nature) or (Local) can research the strider to learn more about them. When a character makes a skill check, read or paraphrase the following, including information from lower DCs.

Striders in the Game[edit]

The strider fits into any game spectacularly. They have there own special niche in both skilled combat and spellcasting that gives them a unique role in any party. Their skills let them master there environment and their spell let them control the battlefield in a new and interesting way. The strider fits into any party with it's skillful repertoire and command over the battlefield.

Adaptation: This class fits well into anyplace where you would place a Ranger. They are pretty much interchangeable in society and can fill any role that requires knowledge of nature and a little thievery.

Sample Encounter: Vadania Crisp is a strider trying to infiltrate an elven fortress in the middle of the woods. Her motive is to get a relic that the PC's have either been assigned to get also, or protect, depending on their alignment. The fortress is made mostly of wood, utilizing Vadania's strider abilities. If the PC's are guarding the relic, they may have to fight her, if they are trying to teal it however, they have an indispensable ally.